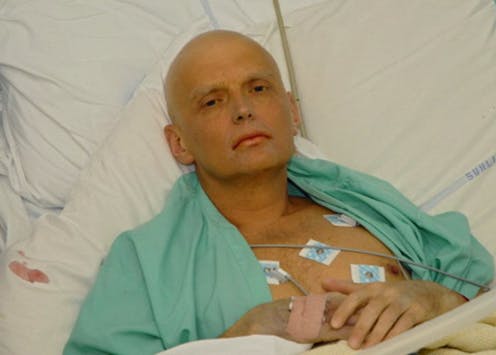 The European court of human rights has ruled that Russia is responsible for the 2006 assassination of Russian spy Alexander Litvinenko in the UK. The six to one judgment is significant for human rights standards, even 15 years after Litvinenko died by poisoning with the radioactive substance polonium-210.

Litvinenko’s story feels lifted from a film script. In Russia, he had been an agent of the Federal Security Service (FSB, formerly known as KGB), working in the organisation crime unit and anti-terrorism department. In 1998, Litvinenko publicly accused the FSB of conducting illegal operations, including assassinations. He was dismissed from the agency and arrested, but subsequently released. Two years later he left Russia and was granted asylum in the UK.

In London, Litvinenko did not lay low. He exposed corruption in Russia, publishing the book Blowing up Russia, which claimed FSB was behind a number of terrorist attacks in Russia.

In 2006, Litvinenko was lethally poisoned – an unusual event on British soil that shocked the public and drew intense media scrutiny. The high-profile case led to a lengthy UK inquiry led by Sir Robert Owen, concluding that his murder was “probably” approved by the Russian government.

UK police established that Litvinenko had been poisoned by his acquaintances, Andrey Lugovoy and Dmitry Kovtun, one of whom was also a former KGB agent. Litvinenko fell ill after drinking tea – later found to be laced with the poisonous substance – with the pair at a London hotel.

The police found multiple traces of the radioactive substance in the hotels, cars, airplanes and restaurants visited by Lugovoy and Kovtun. Curiously, the UK authorities could not check one of the airplanes they used, as its scheduled return to London from Russia was cancelled – the plane never landed again in the UK.

A long road to justice

Litvinenko’s widow, Marina, brought this complaint to the European court of human rights in 2007, represented by three eminent barristers – including the current Labour leader Keir Starmer. She accused the Russian government of involvement in her husband’s death, saying that no effective investigation had been conducted in Russia and that authorities had failed to collaborate properly with their British counterparts. The litigation continued alongside the investigation in the UK. The UK identified the suspects and charged them in 2011. Russian authorities declined the UK’s request for their extradition.

The Strasbourg court agreed with the applicant, establishing that Litvinenko’s right to life had been violated. The court said agents of the Russian state effectively conducted an extrajudicial, targeted killing on British soil.

The court also ruled that Russian authorities attempted to thwart British efforts to investigate the case. Therefore, Russia failed to comply with its obligations under the European Convention on Human Rights (to which it’s a signatory) to properly investigate Litvinenko’s death.

Lugovoy is now a member of Russian parliament and enjoys immunity. He has already characterised the judgment as politically motivated.

The court suggested that the reason for Lugovoy’s election was to avoid responsibility. The sole dissenting judge, Dmitry Dedov – the court’s judge from Russia – proposed a curious alternative explanation, saying Lugovoy “had become a victim of the Cold War”.

The court established a link between the suspects and the Russian state, finding that Lugovoy and Kovtun did not have personal reasons to kill Litvinenko, and also that it would have been extremely difficult to acquire radioactive poison without the governmetn’s help.

Dedov was unconvinced, instead blaming the UK authorities for Russia’s lack of investigation into the case, saying the former failed to share material evidence with the latter.

The court ordered Russia to pay damages and legal costs, totalling €122,500 (£105,411), but the Kremlin said it did not accept the ruling and will not pay the damages. As a result of this judgment the Russian authorities must properly investigate the death of Litvinenko, but this is unlikely to happen any time soon.

The court’s message in this case is clear – any European state that ratified the European Convention on Human Rights (including Russia) cannot escape liability if it conducts illegal activities outside its borders.

Of course, it is often difficult to prove another country’s involvement in alleged wrongdoing. In the Litvinenko case, the court drew conclusions from Russia’s lack of cooperation in the investigations, saying the state had “failed to engage with any fact-finding efforts” by the UK or the court. The court also confirmed the facts that were established by the 2016 British inquiry into the case, bolstering the legitimacy of those findings.

The judgment returned the Litvinenko case to the world media, a reminder that although it may take a very long time, human rights justice can ultimately be served.

Still, this might not be the end of the story. This judgment was delivered by the chamber of seven judges of the human rights court. The Russian government can request this case to be transferred to the court’s grand chamber, where 17 judges can fully review the chamber judgment.

The grand chamber judgment would be a more authoritative ruling in this politically sensitive case, but it would mean further delays and uncertainty for the victim’s family – if the court agrees to hear it again. Having said that, the Russian authorities might not request a rehearing, to avoid attracting even more attention to this case.

In any case, this ruling is significant because Litvinenko’s assassination is not the only isolated case of extraterritorial killing. The attempt to murder former Russian intelligence agent Sergei Skripal using the nerve agent Novichok in Salisbury in 2018 comes to mind.

With the ruling on Litvinenko, the court has sent a clear message that it will not tolerate extrajudicial killings and spy wars, even if they happen outside the borders of the responsible states.

Kanstantsin Dzehtsiarou does not work for, consult, own shares in or receive funding from any company or organisation that would benefit from this article, and has disclosed no relevant affiliations beyond their academic appointment.

2021-09-23
Previous Post: Merkel’s caution has made Germany the great economic underachiever of our times
Next Post: The best budget tablets to buy right now