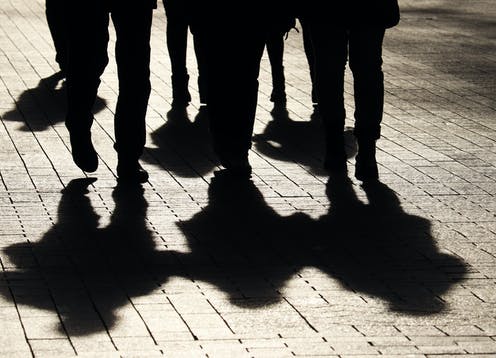 Like many urban areas in the UK, Merseyside has a long and notorious history of street gangs. From the Cornermen and High Rip gangs of the 19th century, to the Croxteth Crew, Nogga Dogs and Moss Edz, the self-perceived North Face “Scouse Soldiers” of today, all have left a dark and deadly legacy.

As someone who has always lived on a former Merseyside council housing estate in Knowsley, one of the most socially excluded and poverty-stricken areas in the UK, and an academic whose research has focused on youth and gang crime, I have seen both sides of the fence. This experience has motivated me to research gangs on Merseyside – one of the UK’s hot spots for gang and organised crime activity.

In 2018-19, social services assessed 16,132 children in Merseyside County, of which 546 were deemed to be either active members of a gang, at risk of joining one, or at risk of being a victim of gang-related violence.

In 2009, sociologist Hannah Smithson and colleagues examined the extent, nature and causes of young people’s involvement in gang and gun crime. From interviews with Merseyside police, practitioners and young people aged between 16 and 29, they identified two types of gang structures.

The first, a loosely-knit, non-hierarchical group of young people who would get together on the streets at night and engage in antisocial behaviour and potentially violence and criminality. This is the classic, stereotypical assumption of what a street gang is. The second type was structured and hierarchical, with ties to illegal drug markets and cities’ adult organised crime groups.

In more recent years, these drug-dealing groups have become fiercely territorial and violent, resorting to the use of knives and firearms in order to protect their selling patch, and exploiting vulnerable young people.

Why do people get involved in gangs? I’ve sought to answer this key question in my own research, and found that a sense of belonging, respect and protection as well as membership as a source of income all contribute.

In 2018 I interviewed 44 young men – half involved in street gangs and half completely abstaining – to learn why some young people joined gangs. Social exclusion, coupled with cutbacks brought in by austerity policies, meant many young men who became involved in street gangs suffered from “network poverty”. This means that they lacked the ability to make good “pro-social” connections, which shape how young people perceive the welfare of others and their communities.

With friendships mainly restricted to the schoolyard or the residential streets, criminality is seen as a way to succeed in a world which values the ownership of material things. In the case of gang members, values become bound around deviant group formation and offending as a way of escape from continuing poverty and deprivation.

In contrast, young men who found opportunities beyond their local area abstained from gang affiliation and criminality. They joined interest groups such as martial arts classes or took weekend jobs, forging new friendships with peers away from their home streets. Their belief systems opened up, and they embraced legitimate employment and leisure activities, leading to further opportunities.

For those involved in street gangs, there was also the appeal of edgework – as risk-taking behaviour is described in criminology – which provided excitement and escapism from the boredom and routine existence that social exclusion brings. Quite simply, there were no real legitimate opportunities for young people to access. Such thrill-seeking behaviour has not been adequately addressed by interventions aimed at countering gang recruitment.

In the eyes of many gang-involved young people, the line between employment and criminality (specifically drug dealing) became blurred. This was evident in interviews with gang members living closer to Liverpool city centre and its vibrant nighttime economy. Here, the language used during interviews became more businesslike – one participant identified his group as a “firm of boys” and talked about serving punters (customers) and profit margins.

I coined the term “deviant entrepreneurship” to describe the process of gangs making money through illegitimate means. Those gang members involved neutralised their criminal activity into the context of work, or as it is widely known on the streets around Liverpool, “grafting”.

Across Merseyside, many young people involved in street gangs have become embroiled with adult organised crime groups as part of the “county lines” phenomenon – a form of exploitation in which gangs of adults coerce children and young people to carry drugs to rural or coastal areas of the country.

In 2018, modern slavery researcher Grace Robinson interviewed a combination of young people (aged 14-20) and people working in youth justice interventions. Her research focused on exploitation within gangs by adult criminals. She found that some young people were paid a commission in drugs (in most cases, cannabis) in return for selling a supply.

Moreover, she identified the widespread use of social media platforms to lure young people into carrying out drug supplying tasks, and to manipulate them through debt bondage. Gang members offer young individuals trainers, designer clothes and sometimes even a place to stay or drugs for personal use. The young person is then forced into working to pay off the debt, by carrying drugs or recruiting other young people into the network, continuing the cycle of exploitation.

The existing research makes clear that gang activity on Merseyside is a major and continuing problem, and that addressing individualised symptoms alone will not stop young people becoming involved. A substantial part of this is the environment and lack of opportunities – something that should be addressed further by politicians.

Continuation of austerity policies, including cuts to youth services, coupled with unemployment and the financial consequences of the pandemic, have created socially deprived breeding grounds for street gangs and organised crime groups to flourish.

Robert Hesketh does not work for, consult, own shares in or receive funding from any company or organisation that would benefit from this article, and has disclosed no relevant affiliations beyond their academic appointment.