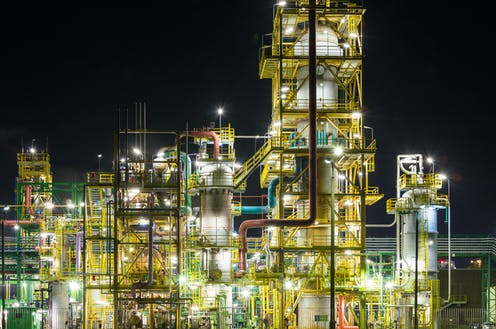 As far as the environment goes, carbon dioxide is probably public enemy number one. This makes it all the more ironic that the UK is currently suffering from a shortage of the gas, which experts warn will affect a variety of industries, most notably food and drink.

In the right setting, CO₂ is an extremely useful gas. When added to beverages it gives them their fizz. Trap it in high pressure bubbles in sweets and you get popping candy. Compress it in a cylinder and you have a fire extinguisher. Freeze it and you produce dry ice which is used to keep medical materials (including COVID vaccines) chilled during transport.

The microbial organisms that cause food to perish need oxygen to survive, so packaging salad leaves with CO₂, not oxygen, keeps them fresh. Meanwhile, in the meat industry, high concentrations of the gas are used to replace oxygen in the air animals breathe, rendering them unconscious before they are slaughtered.

Given our need for CO₂ in one area, and the excess of it in another, the obvious question is: why don’t we simply pull carbon dioxide out of the air? The simple answer is that, despite its detrimental impact, there’s relatively little carbon dioxide in the air. Though we have 50% more of it in our air than before the industrial revolution, CO₂ still only makes up 0.04% of air content.

This makes CO₂ extremely difficult to “find” and then remove from the air. There’s plenty of work going on to capture the gas from the air, with a view to countering CO₂ emissions, but at the moment this isn’t a viable source of the gas for industry.

Nitrogen plays a critical role in the biochemistry of every living thing. It is also the most common gas in our atmosphere. But nitrogen gas is largely inert, which means plants and animals can’t extract it from the air. Consequently, a major limiting factor in agriculture has always been the availability of nitrogen.

In 1910, the German chemists Fritz Haber and Carl Bosch changed all this when they combined nitrogen and hydrogen into ammonia. This in turn can be used as a crop fertiliser, eventually filtering up the food chain to us.

Today, about 80% of the nitrogen in our bodies comes from the Haber-Bosch process, making this single chemical reaction probably the most important factor in the population explosion of the past 100 years.

About 78% of our atmosphere is nitrogen, so finding this ingredient for the Haber-Bosch process is easy. But the other component, hydrogen gas, is not so readily available. There’s plenty of hydrogen about, most obviously as the H in H₂O and CH₄ (methane), but breaking the bonds between the hydrogen and oxygen in water or carbon in methane requires a huge amount of energy.

The main way it’s currently produced is by a process known as methane steam reforming. This works by starting with natural gas – which is becoming far more expensive in the UK – and then heating it to about 1,000℃ in the presence of water. The end products are hydrogen gas (H₂) and CO₂.

These are separated for their respective uses. Unfortunately, the amount of CO₂ produced by the fertiliser industry far exceeds the quantity needed by other industries. So most fertiliser plants don’t bother capturing it.

The fossil fuels used in fertiliser production and the CO₂ it creates as a byproduct makes it particularly unfriendly to the environment. Hence a big part of the decarbonisation agenda is to produce hydrogen cleanly for use in fertilisers and fuel. One of the simplest ways to achieve this is via the electrolysis of water, using clean sources of electricity.

Meanwhile, as carbon capture technologies develop, we may see carbon dioxide extracted directly from the air for use in industrial processes. But that’s a long-term solution, and so isn’t going to help any time soon.

But there are alternatives to CO₂ that might help in a pinch. The most obvious is nitrogen gas, which can be used in the same way as CO₂ to preserve food or stun animals. Likewise, because nothing burns in nitrogen, it can be used to suppress fires – just like CO₂ fire extinguishers.

The UK government has been holding crisis talks with the US owner of two of the UK’s largest nitrogen fertiliser plants, both currently inactive. Perhaps persuasion will see them fire back to life. But the CO₂ shortage has nonetheless exposed the complex chemical supply chains upon which we rely for our fizzy drinks and packaged salads.

Mark Lorch does not work for, consult, own shares in or receive funding from any company or organisation that would benefit from this article, and has disclosed no relevant affiliations beyond their academic appointment.