Best films to see this autumn 2021, from Dune, to Spencer 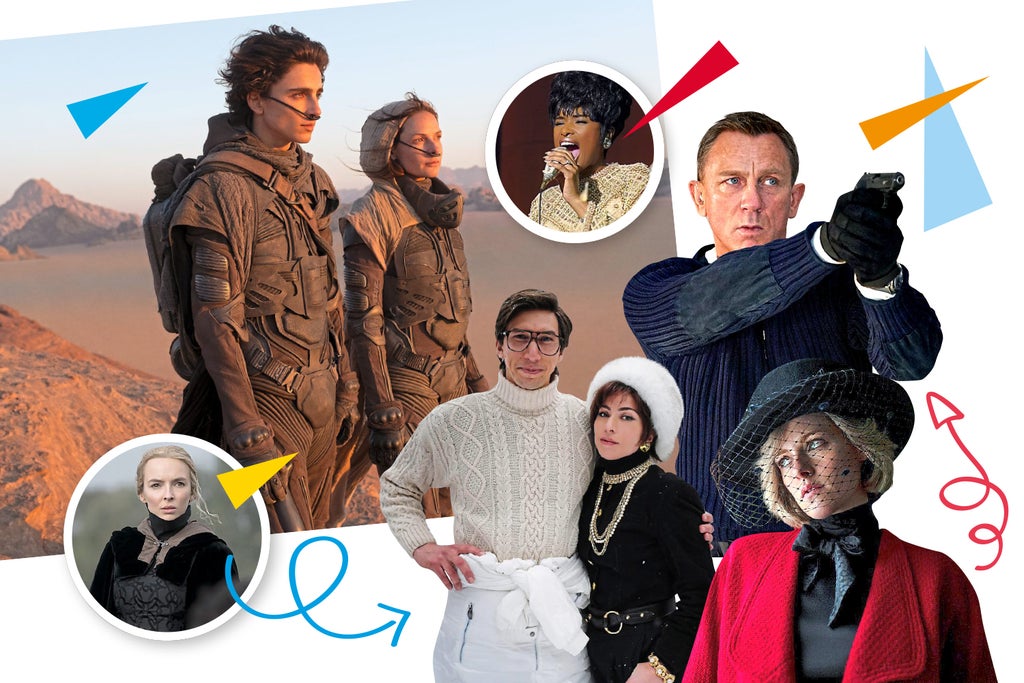 Book your tickets, buy your popcorn – we’re in for the best set of blockbuster films since before the pandemic. Nothing beats the big screen, so here’s our guide to what you can’t miss at the cinema this autumn.

Timothée Chalamet and Denis Villeneuve harness all the best things about Frank Herbert’s sci-fi classic to create a febrile and poetic blockbuster that even those who file Herbert under “nice but indecipherable” will enjoy. This film only covers the first half of the book so as the whole world prepares to moon over Dune, this is just the beginning. COS

Pablo Larrain’s brilliant, bodacious, often knowingly camp offering tracks three days in the life of Diana, Princess of Wales (Kristen Stewart; stupendous). We’re in Sandringham House, in the early ‘90s, and all the Royals, including her Maj, are determined to keep Di down. This feast will make royalists gag. Queens and commoners? They’ll lap it up. COS

Wes Anderson is back with another aesthetically pleasing ensemble drama set at the French bureau of a New Yorker-style magazine in the fictional town of Ennui-sur-Blasé. Regular Anderson collaborators like Frances McDormand, Bill Murray, Tilda Swinton and Owen Wilson are on board, along with Timothée Chalamet and Léa Seydoux. KR

It’s based on a hit stage musical that no one in their right mind would call feelgood. One of the most important characters kills themselves and, for most of the movie, our letter-writing, high-school hero Evan (Broadway champ Ben Platt) flip-flops between guilt and mania. But will it make us FEEL? With Julianne Moore and Amy Adams in the cast, the answer is bound to be yes. COS

The Many Saints of Newark

Trailers for this Sopranos prequel have thrown fans into a happy tizz. James Gandolfini’s real-life son Michael looks perfect as teenage Tony, though Sopranos’ writer David Chase insists the focus is on Tony’s sexy uncle, Dickie (Alessandro Nivola). If The Many Saints of Newark turns out to be Scorsese-by-numbers, it’ll be a slap in the face.But whadayagunnado? Right now, Chase is god. COS

According to Jodie Comer, Ridley Scott’s medieval epic (based on a true story) will offer multiple points of view of a rape. Let’s ignore Matt Damon and Ben Affleck’s dodgy haircuts (they look about as 14th century as Siegfried & Roy). Comer and Adam Driver, who plays the rapist, are two of the best actors on the planet. COS

Ridley Scott again. This time the true-crime concerns a charismatic fortune-hunter, Patrizia Reggiani (Lady Gaga), who, having married into the Gucci clan, gets a tad homicidal when her ex-hubby Maurizio (Adam Driver), remarries. The clothes and prosthetics are certain to be top-notch. This promises to be a whole lot of nasty fun. COS

Before she died, Aretha Franklin handpicked Oscar-winner Jennifer Hudson to play her in a future biopic. The queen of soul made an inspired casting choice — Hudson lights up the screen with her powerhouse performance in Respect, the debut feature film from acclaimed Broadway director Liesl Tommy. She’s joined by Forest Whitaker, Audra McDonald and Marlon Wayans. KR

No Time To Die

The release date for Daniel Craig’s final outing as Bond has been shaken and stirred several times over thanks to you know what but it looks set to finally hit the big screens at the end of the month. We find our hero trying to relax in Jamaica, having left active service — until his CIA buddy Felix Leiter appears, needing help to rescue a kidnapped scientist. Does this guy ever get a day off? Who knows, but his return will be a major test for cinema’s comeback. JT

A swoonworthy, star-studded period drama just in time for autumn? You’re spoiling us. Josh O’Connor, Odessa Young, Olivia Colman and Colin Firth star in this adaptation of Graham Swift’s novel about a secret upstairs/downstairs love affair. Full of steamy yearning, it could be this decade’s Atonement. JT

Venom: Let There Be Carnage

Despite a brutal critical panning for Venom’s first big screen outing in 2018, Eddie Brock is back. Tom Hardy returns as an investigative journalist who has an alien symbiote (whatever that is) living in his body. Andy Serkis takes up the directing reins, with Naomie Harris, Woody Harrelson and the indefatigable Stephen Graham joining the cast. JT

Kenneth Branagh’s latest directorial effort couldn’t be further from his recent string of Agatha Christie adaptations. Based on his childhood in Northern Ireland at the height of the Troubles, this is a much more personal, pared-back project. Shot in black and white, it stars Jamie Dornan, Judi Dench and Caitriona Balfe, with 10-year-old newcomer Jude Hill in the central role. KR

Ready to get lost in London? Edgar Wright’s latest is a psychological thriller in which Eloise (Thomasin McKenzie), a fragile, modern fashion student, is catapulted into the swinging Sixties, where she blurs with the apparently insouciant Sandie (Anya Taylor-Joy). The film explores bright lights and red lights, ie camouflaged exploitation, with the late Dame Diana Rigg especially divine as the Fitzrovia landlady who’s seen it all. COS

The Phantom of the Open

Manna from heaven: the mere words “from the writer of Paddington 2”. That film was practically perfect, so we can’t wait to see this new comedy based on the life of the world’s so-called worst golfer Maurice Flitcroft, penned by Simon Farnaby. The cast features the best of British, too: Mark Rylance plays Flitcroft and Sally Hawkins and Rhys Ifans also star. JT

Richard Williams was the big daddy from Compton who conquered the privileged and racist world of tennis via daughters Venus and Serena. He’s brought to life here by Will Smith (already tipped for a best actor Oscar) and though Smith’s performance accentuates the positive, advance word suggests director Reinaldo Marcus Green doesn’t gloss over the more complicated aspects of his character. COS

An animated kids movie, from fledgling British company, Locksmith. A young boy covets a must-have toy, but the “B-bot” he’s given turns out to be one of a kind. “Ron”, rather like Free Guy’s entertaining “Dude”, is a glitchy work in progress. Expect the vocal cast (including Zach Galifianakis, Olivia Colman) to know exactly what they’re doing. COS

Director David Lowery’s trippy take on the Arthurian legend of Sir Gawain (the 14th century poem that’ll be very familiar to generations of English Lit undergrads) stars Dev Patel in the title role – providing yet more proof that he’s one of our most versatile stars. It earned rave reviews when it debuted in America earlier this year, and will finally get a UK release in September. Alicia Vikander, Joel Edgerton and Barry Keoghan also star. KR

The latest trailer for this Disney/Marvel excursion is fabulously funny and stirring. Phew! We weren’t sure superheroes, and Nomad’s Chloe Zhao, would be a good fit. Looks like we were wrong. A race of discreet and powerful immortals, including Brian Tyree Henry as the first character to be depicted as gay in a Marvel film, begin to rethink their relationship to humanity. Eternals seems built to last. COS

Who you gonna call? Stranger Things’ Finn Wolfhard and rising star McKenna Grace (who’s appeared in everything from to I, Tonya to The Handmaid’s Tale) lead this reboot, set thirty years after the events of Ghostbusters 2. They play two youngsters who move into their late grandfather’s house – and discover his links to the original Ghostbusters gang. Look out for cameos from Bill Murray, Dan Aykroyd and Sigourney Weaver.  KR