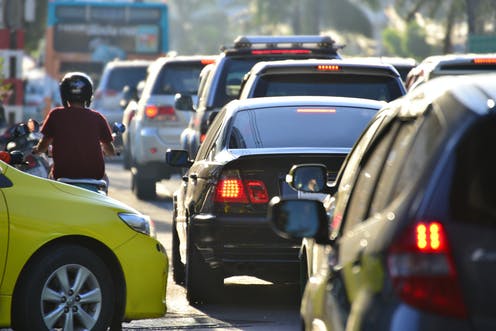 Within the next two decades the UK is set for a total switch from petrol and diesel cars to electric cars, which pay virtually no tax.

To recoup the around £34bn a year currently collected through fuel and vehicle excise duty, one report has recommended that the most equitable way would be a national road pricing system. This would charge drivers for using the roads to help cover the costs of infrastructure as well as driving down air pollution and encourage the use of lower carbon options such as car-sharing and public transport. But how would such a system work?

Here are some of the ways these systems could be introduced:

This includes toll plazas and paper permits authorising cars to drive within a certain area, such as the scheme used in Singapore between 1975 and 1998.

This could also be used when drivers are billed annually based on their mileage or time spent driving if cars were also fitted with timers.

ANPR combines a camera with image recognition software to read number plates. It is already widely used in the UK for motorway speed cameras and the London congestion charge.

While ANPR requires no extra hardware in the car, a national roll-out would require cameras to be installed on all included roads – not just motorways and A-roads where most of them currently are. That would be expensive.

Dedicated short-range communications (DSRC) is a specific band of radio reserved for transportation applications. In a DSRC-based road pricing scheme, data regarding vehicle position is exchanged via radio waves in the specific DSRC band between an in-vehicle communications device and a suitable roadside unit, typically a gantry spanning the width of the road. DSRC supports the current Singaporean electronic road pricing scheme.

DSRC works well in a small area: the Singapore scheme reports drivers responding to changing prices, including shifts of up to 20% to buses in rush hours following a marginal S$1 (around £0.54) increase to the toll for a particularly congested road. However, a UK equivalent would require the installation of costly gantries across the country.

GPS uses satellites that orbit the Earth to triangulate a user’s location, whereas cellular locating technologies use relative network signals between towers in a network to do the same thing.

These technologies can monitor the position of cars equipped with tracking equipment in the same way that smartphone users get directions through map-based apps. Cellular and GPS have relative trade-offs: GPS location accuracy suffers in urban areas, cellular network coverage doesn’t work as well in rural areas. Hybrid technologies are routinely used to get the best of both worlds, which could potentially support a national road pricing scheme with lane-by-lane accuracy.

A GPS/cellular road pricing system could work through drivers’ smartphones. But it would obviously require all drivers to have a smartphone and they would need to be turned on, with location services enabled, whenever the driver took a trip. A workable GPS/cellular road pricing system would require a tracking unit to be fitted to every vehicle. In 2023, the Singaporean system is due to be upgraded to use GPS communications, so it can cover more roads without the need for more gantries.

What is the best option?

Technology for a national UK road pricing system would need to be able to work over a wide area, including remote parts of the UK. So the only workable options are either manual/paper or GPS/cellular.

A manual or paper-based system where drivers are billed annually according to their mileage would be less intrusive, as no in-car hardware would be required, and could be simpler to understand. But, it would not address – as the current car tax system does not – the variability in the “external costs” of driving.

External costs are those which affect the rest of society and are based on the contribution cars make to climate change, congestion, air pollution, noise pollution, infrastructure costs and the limits to regional economic development that result from car dependency.

Read more:
The pandemic could leave us with congestion chaos – here’s how to avoid it


UK drivers currently pay only 49% of these costs. Analysis suggests that they vary enormously by location, from 1.3p per km (cost to society) on rural minor roads to 93.1p per km on London A-roads. They also vary by time, from 9.5p per km during weekday off-peak times to 29.5p per km during the weekday morning peak.

The best option for a national scheme with variable prices to reflect the true costs of driving appears to be GPS/cellular. Such a system would be the most equitable way of funding the future of motoring: while encouraging us to shift towards alternatives to cars in cities as is so desperately needed. It could also ease the burden on those with less access to alternatives.