UK COVID plan: how will the pandemic play out this winter? 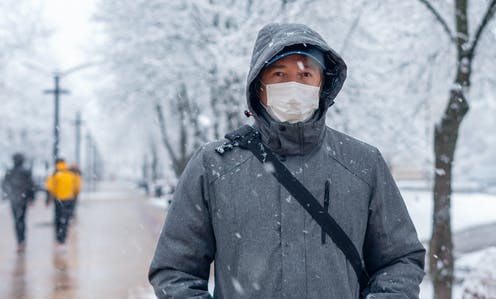 Winter is always a challenging time for the NHS. On top of providing routine healthcare, there are the added demands of seasonal illnesses such as flu. There’s also a large backlog this year of healthcare delayed by the pandemic.

If COVID-19 hospitalisations spike, then there’s once again a possibility that the NHS could be overwhelmed. Because of this, the UK government has outlined plans to keep COVID-19 in check this winter. It has split its tactics into two tiers.

The primary strategy revolves around rolling out more vaccines to key groups. All over-50s, clinically vulnerable people, their carers and frontline medical staff will be offered a third dose this autumn. At the same time, the standard vaccine programme will be widened to cover more schoolchildren.

The test, trace and isolate system will also carry on being used. People are also being advised to minimise the risk of spreading the virus by socialising outdoors where possible, ventilating indoor spaces and wearing masks in crowded places.

If cases and hospitalisations still rise too much, then plan B will be launched. Working from home and mask wearing will return and vaccine passports will be needed to access certain public venues. The government has indicated that a new lockdown would be an absolute last resort.

Does this plan make sense?

So far, the UK’s vaccination strategy is working. Vaccines are estimated to have averted more than 24 million infections and 143,600 hospitalisations. But one big uncertainty is how long immunity to COVID-19 lasts. Based on studies of other human coronaviruses, immunity that blocks infection may be short lived.

There’s also emerging evidence from the UK, Israel and Qatar (still in preprint, so yet to be reviewed by other scientists) that vaccine-induced immunity to COVID-19 wanes over time, particularly in the elderly.

Given that the risk of severe disease and death from COVID-19 increases with age – and that older people were vaccinated first and therefore are more likely to have had their protection wane – it makes sense for them to be prioritised for a booster. This will raise the protection of those most at risk of severe disease at a time when indoor mixing (and the risk of transmission) is set to increase. This should reduce hospitalisations.

It’s also been decided that 12- to 15-year-olds will be offered COVID-19 vaccines as well. This, though, isn’t actually part of the government’s winter plan.

Currently, infections are concentrated in teenagers and young people, where vaccine coverage is lower. However, their infections tend to be mild and their risk of severe illness and death is low – meaning the health benefit of vaccinating teenagers is therefore likely to be small. There’s also some evidence that children are less likely to transmit the virus to others. As such, vaccinating this age group is unlikely to have a big influence on hospitalisation rates – so why do it?

Well, vaccinating 12- to 15-year-olds can still reduce the chance of them infecting other vulnerable children and adults, some of whom may not be vaccinated. It will also reduce the likelihood of COVID-19 outbreaks in schools and so minimise further disruption to education.

It’s well recognised that missing school has consequences, such as harming children’s mental wellbeing and educational attainment. Offering more protection to younger people through vaccines also makes sense given that other public health measures for schools – such as face coverings and bubbles – have been relaxed. While not directly beneficial to the NHS, extending vaccine coverage to this group is a good thing to do.

That said, school has already restarted after the summer break. Had vaccinating 12- to 15-year-olds started earlier, more infections over the coming months could potentially have been avoided.

What about the rest of plans A and B?

The other big uncertainty is whether the control measures suggested (mask wearing in some situations, socialising outdoors and – if things take a turn for the worse – mandatory masks and working from home) are going to be enough alongside the vaccine booster programme.

While vaccines are highly effective, they don’t provide total protection. There will be more breakthrough infections over time, even among the double vaccinated. Even if the risks of infection are reduced by vaccination, if a lot of people are infected, this will lead to hospitalisations.

We’re already seeing this happen. Cases are high and hospitalisations are rising. As winter arrives and we spend more time indoors, it’s reasonable to assume there will be more infections. Some public health measures will therefore probably be needed in order to prevent further waves of infections, hospitalisations and deaths from COVID-19. The government is right not to rely just on vaccines.

The prime minister has signalled that he is dead set against lockdowns. They are unpopular with the public and will be increasingly difficult to enforce. But whether they will be needed will depend on how things unfold. Should a dangerous new variant emerge that is more infectious or able to evade vaccine immunity, robust containment measures could be needed. The government has to be flexible and not wholly rule out possibly going back into lockdown.

On the plus side, ongoing genomic surveillance of viral variants, which is key to detecting this sort of threat, is being increased under the winter plan.

The next few months will be a period of uncertainty as people return to school and workplaces. Pressures on the NHS will rise. For now, more contentious measures such as vaccine passports, mandatory face coverings and work-from-home orders have not been deployed. But they are likely to be needed to avoid using even more disruptive measures in future should the situation take a turn for the worse. It is a good idea to prepare the public for their return.

2021-09-16
Previous Post: Do the northern lights make sounds that you can hear?
Next Post: Rising inflation: unless we act now, it will not be temporary