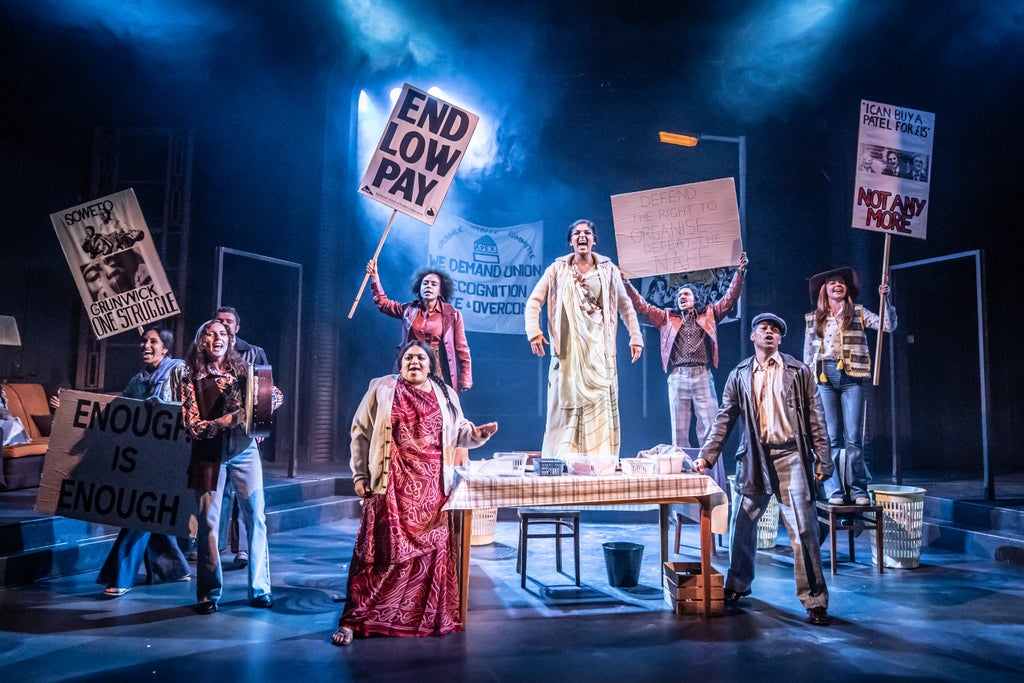 amiliar scenarios develop in unfamiliar ways in this trio of short plays about immigrant groups in Brent, the Kiln theatre’s manor, in the 60s and 70s. None of these scripts are going to set the world alight on their own, but together they build an idiosyncratic portrait of how Irish, Afro-Caribbean, and Asian communities overlapped at a time of racial and political tension. Directors Taio Lawson and Susie McKenna stage all three with brio on simple sets, in which the only common feature is a red phone box with a poster celebrating Enoch Powell’s inflammatory 1968 “rivers of blood” speech.

First up is Moira Buffini’s Dance Floor, where recent blow-in Aoife, “in trouble” and homesick for Donegal, meets unlikely hero Sean while mopping down an empty dance hall. Though it deals in tropes that are as old as the hills and twice as green, it’s a touching portrait of morning-after regret and renewal, with winningly low-key performances from Claire Keenan and Emmet Byrne.

Roy Williams’s Life of Riley subverts the usual narrative of an angry child confronting an absentee parent, against the backdrop of the 1976 Notting Hill riots. Nineteen-year-old Paulette despises her black father, a reggae session musician, for leaving her white mother. She also aspires to share his life, where music trumps all other obligations. Chris Tummings captures the feckless charm of Riley and his vainglorious tales of Bob Marley and Toots Hibbert. The accusing face of Harmony Rose Bremner dissolves when she starts – beautifully – to sing.

Last and weirdest is Waking/Walking by Suhayla El-Bushra. This explores the Grunwick dispute of 1976-8 – where miners and other trade unionists supported exploited immigrant employees of a photo processing business – through one Indian family. Initially it’s a parody of a 70s sitcom: rebellious daughter; dad who thinks he’s liberal but isn’t; exasperated mum, Anjali, who keeps it all together. Then Anjali (Natasha Jayetileke) shifts into angry monologue and joins the picket line.

This, and many other moments, feel bittersweet given the current state of the world. The stories of Brent’s Jewish and Muslim communities aren’t included. A slice of life can be deep but it will always be narrow.