‘Cyborg soil’ reveals the secret microbial metropolis beneath our feet 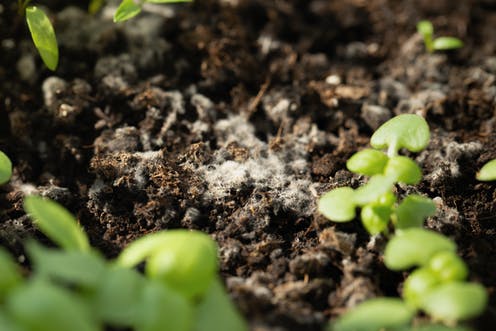 Dig a teaspoon into your nearest clump of soil, and what you’ll emerge with will contain more microorganisms than there are people on Earth. We know this from lab studies that analyse samples of earth scooped from the microbial wild to determine which forms of microscopic life exist in the world beneath our feet.

The problem is, such studies can’t actually tell us how this subterranean kingdom of fungi, flagellates and amoebae operates in the ground. Because they entail the removal of soil from its environment, these studies destroy the delicate structures of mud, water and air in which the soil microbes reside.

This prompted my lab to develop a way to spy on these underground workers, who are indispensable in their role as organic matter recycling agents, without disturbing their micro-habitats.

Our study revealed the dark, dank cities in which soil microbes reside. We found labyrinths of tiny highways, skyscrapers, bridges and rivers which are navigated by microorganisms to find food, or to avoid becoming someone’s next meal. This new window into what’s happening underground could help us better appreciate and preserve Earth’s increasingly damaged soils.

In our study, we developed a new kind of “cyborg soil”, which is half natural and half artificial. It consists of microengineered chips that we either buried in the wild, or surrounded with soil in the lab for enough time for the microbial cities to emerge within the mud.

The chips literally act like windows to the underground. A transparent patch in the otherwise opaque soil, the chip is cut to mimic the pore structures of actual soil, which are often strange and counter-intuitive at the scale that microbes experience them.

Different physical laws become dominant at the micro scale compared to what we’re acquainted to in our macro world. Water clings to surfaces, and resting bacteria get pushed around by the movement of water molecules. Air bubbles form insurmountable barriers for many microorganisms, due to the surface tension of the water around them.

Once we’d implanted our chips into the soil, we could watch as microbes filed through on their decomposition commutes, revealing their interactions, their food webs, and how different microbes engineer their surrounding, ever-changing micro-habitats.

When we excavated our first chips, we were met with the full variety of single-celled organisms, nematodes, tiny arthropods and species of bacteria that exist in our soils. Fungal hyphae, which burrow like plant roots underground, had quickly grown into the depths of our cyborg soil pores, creating a direct living connection between the real soil and our chips.

This meant we could study a phenomenon known only from lab studies: the “fungal highways” along which bacteria “hitchhike” to disperse through soil. Bacteria usually disperse through water, so by making some of our chips air-filled we could watch how bacteria smuggle themselves into new pores by following the groping arms of fungal hyphae.

Unexpectedly, we also found a high number of protists – enigmatic single-celled organisms which are neither animal, plant or fungus – in the spaces around hyphae. Clearly they too hitch a ride on the fungal highway – a so-far completely unexplored phenomenon.

Because we investigated several hundred possible paths within our cyborg soil chips, including several thousand individual pore spaces, we could also quantify that this was happening often. This shows that hyphae must be an important vector for the dispersal of a large variety of swimming microorganisms, giving them an important advantage when foraging for food in subterranean micro-cities.

In our study, we also wanted to explore how and by what means microbial cities are engineered. One way we could do this was by watching how soil minerals found their way into our chips, creating pockets of real soil space within the artificial structures we’d placed in the ground.

As our chips started to dry, we witnessed how water is sucked through soil pores: a tsunami of water movements that soil microorganisms are regularly exposed to as rain and shine tampers with their tiny worlds. The resulting patterns in the soil minerals looked just like a riverbed system in our macro world.

And it’s not just physical forces that shape the habitat of soil microbes. With their strong hyphal tips, fungi often act like “ecosystem engineers”, opening up passages and blocking others with their cells. They’re responsible for many of the streets, avenues and bridges in the microbial metropolis.

Read more:
The secret life of fungi: how they use ingenious strategies to forage underground


More surprisingly, we found that other, less “strong” organisms also alter the microscopic structure of soils. A ciliate, for example, which possesses small hair-like extensions for locomotion, can also bulldoze soil with its vigorous foraging for food.

Our cyborg soil study ultimately helps connect field ecology with controlled lab studies. It combines the advantages of studying realistic, complex communities of soil organisms while at the same time carefully controlling and adjusting factors like nutrient supply or temperature so that we can see how soils and their microbes react to changes above ground.

But there’s another benefit. We believe that observing the hidden world of soils and their intriguing inhabitants could help people engage emotionally with this vital ecosystem. Other ecosystems have long had charismatic animals to represent conservation initiatives. Soils on the other hand are still associated with dirt and dirtiness. Yet soils support 95% of our food production. They store more than twice the amount of carbon than the biosphere and atmosphere combined.

Read more:
Treated like dirt: urban soil is often overlooked as a resource


We want to show that when you dig your teaspoon into the earth, you’re excavating the upper reaches of an exciting secret metropolis that contains a quarter of Earth’s species. The cute organisms in your spoon aren’t dirty: they’re quietly providing vital ecosystem services which support all life above ground. These soil-city dwellers are in urgent need of better protection.

2021-09-04
Previous Post: John is happy to hand over this Bouquet!
Next Post: Grazing, gorging or skipping: which is better for weight loss?