Dementia: how to make sense of the link with people who struggle to hear over background noise 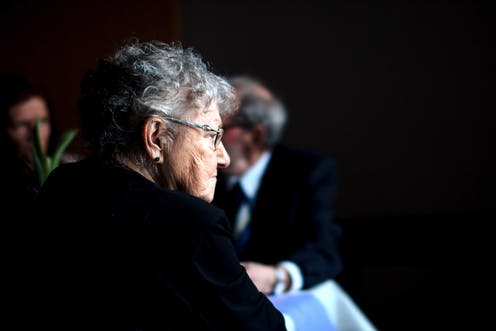 The number of people living with dementia is projected to treble from 50 to 150 million worldwide by 2050. Although there’s currently no cure for the condition, researchers are continuing to learn about how people can reduce their risk through making lifestyle changes (such as exercising more or quitting smoking) and managing health issues (including diabetes and hypertension).

Hearing loss may also be a potential target for preventing dementia. Studies show that hearing impairment is linked to a greater risk of dementia – and that managing hearing problems early may be key to reducing risk.

Our recent paper confirmed these findings, while focusing on an area that has received less attention: people who struggle to pick out speech in noisy environments. The hearing of people in this category is often deemed “normal” in traditional tests, but we were able to show with a large cohort for the first time that they too are at greater risk of going on to develop dementia.

Previous studies looking at the link between hearing impairment and dementia have used a method of hearing assessment known as pure-tone audiometry to measure participants’ hearing. This is usually the gold standard to testing a person’s hearing, and works by measuring a person’s ability to detect sounds – specifically tones – in a quiet environment.

However, many people whose test shows that they have “normal” hearing can still have issues hearing when different assessment methods are used. This includes those who struggle to pick out speech in noisy places, which is known as speech-in-noise hearing.

Participants’ speech-in-noise hearing was measured using what’s known as a digits triplet test. This involved asking participants to identify three spoken numbers presented in varying levels of background noise. Based on their performance, we then grouped participants into three categories: “normal”, “insufficient” and “poor”.

There are several suggestions for why there is a link between hearing impairment and dementia. One possibility is that impaired hearing increases the likelihood of other risk factors for dementia, such as social isolation or depression. But we found little evidence to support this, with depressive symptoms and social isolation only explaining a small percentage (less than 7%) of the association between speech-in-noise hearing impairment and dementia.

It’s also possible that our findings (and those from other studies) might be detecting an association between dementia and hearing impairment when in fact both are caused by something else altogether. While we took a range of factors into account in our analyses – such as age, education level and socioeconomic status – we can’t rule out the possibility that other factors might be involved that we didn’t look at.

The other possibility is that dementia causes hearing impairment. This might seem an unusual explanation, as in our study dementia was diagnosed after hearing was measured. But the pathology of dementia typically develops years before a person receives a diagnosis. It often occurs before memory problems and other cognitive issues become apparent. This “pre-clinical” pathology results in other symptoms – such as weight loss – and could potentially cause issues with hearing.

We explored this possibility in two ways. The first was to see whether hearing impairment was associated with dementia diagnosed a long time after hearing was measured. This is because pre-clinical symptoms are more likely to manifest close to a diagnosis.

When looking at dementia diagnosed nine to 11 years after the hearing test, insufficient and poor speech-in-noise hearing was associated with a 54% and 85% increased risk of dementia. This is similar to the main findings of our study. You would have expected this group to have a lower correlation with hearing problems if pre-clinical dementia was causing them.

Our second approach was to only include people who described their health as “good”, “very good” or “excellent” at the time hearing was measured. This is because worse health might reflect the early pre-clinical symptoms of dementia. People with worse health are also probably more likely to have hearing problems.

In both cases, this is tentative evidence that dementia might not be causing hearing impairment. But even so, some early pre-clinical symptoms of dementia can manifest decades before a diagnosis. Studies which diagnose dementia 15 or even 20 years later are necessary to disentangle these complex relationships further.

While our findings are preliminary, they add to the growing body of evidence that hearing impairment is a promising target for preventing dementia. In fact, it’s thought that if hearing impairment is indeed a cause of dementia, addressing it could prevent 8% of dementia cases in instances where dementia is not otherwise evident. This statistic is based on pure-tone audiometry hearing – so it could very well be higher when considering issues with speech-in-noise hearing.

Thomas Littlejohns does not work for, consult, own shares in or receive funding from any company or organization that would benefit from this article, and has disclosed no relevant affiliations beyond their academic appointment.

2021-08-31
Previous Post: Consumer borrowing was heavily restricted in 1940s to curb inflation – it’s time we did it again
Next Post: ‘Hurst’ has a ‘Golden’ opportunity which I’ll bet he takes!