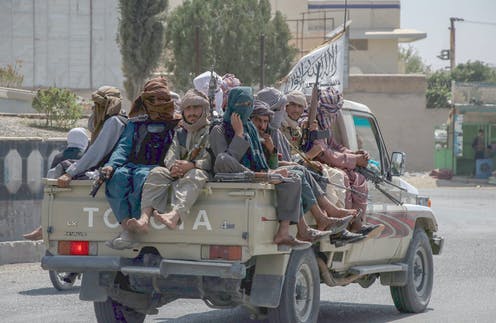 In this week’s episode of The Conversation Weekly podcast, we talk to two Afghan experts about the origins of the Taliban and what’s happened over the last 20 years that enabled the group to retake control of most of Afghanistan.

For Ali Olomi, those people surprised by the Taliban’s quick takeover of Afghanistan in August 2021, were only surprised because they “don’t know the history”. Olomi, assistant professor of history at Penn State Abington in the US, says a failure to understand the past 40 years of Afghan history led to “massive blunders” after the US-led invasion in 2001. And it’s this history that can help explain what may happen next in Afghanistan.

In this episode, Olomi traces the Taliban’s emergence in the 1990s to the Saur Revolution in Afghanistan in 1978 – an event he says “set the stage for the chaos that will emerge over the subsequent decades”.

Niamatullah Ibrahimi, lecturer in international relations at La Trobe University in Australia then explains what happened after the Taliban seized control of Afghanistan in 1996. He says they remained a fighting force, and “never transitioned from being a militia group to forming a government of functioning state institutions, even in places like Kabul.”

From 2001, with their leadership in exile in Pakistan or Qatar, Ibrahimi explains where the Taliban drew their support from, and why a February 2020 deal between the Trump administration and the Taliban was a “fundamentally flawed agreement”. He says the deal is “responsible for the speed which the Taliban gained not only military ground but also international, diplomatic legitimacy”.

And Lee-Anne Goodman, politics editor at The Conversation in Toronto, recommends some further reading on what the Taliban takeover means for Afghans.

This episode of The Conversation Weekly was produced by Mend Mariwany and Gemma Ware, with sound design by Eloise Stevens. Our theme music is by Neeta Sarl. You can find us on Twitter @TC_Audio, on Instagram at theconversationdotcom. or via email on [email protected] You can also sign up to The Conversation’s free daily email here.

2021-08-27
Previous Post: Southgate shocked at abuse he recieved after urging youngsters to get Covid jabs
Next Post: Jackson Hole: the world’s central bankers have plenty to discuss after such an expensive pandemic