COVID: media must rise above pitting scientists against each other – dealing with the pandemic requires nuance 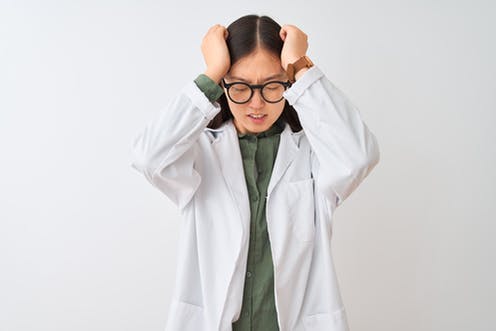 At the start of the pandemic, there was a striking sense of shared resolve and solidarity. Facing a public health crisis greater than any in living memory, people were largely united in their support of difficult measures to protect the vulnerable, safeguard the health system and sustain key workers.

There were, of course, differences of opinion. For example, some disagreed about the severity of the threat posed by COVID, about the wisdom of different national approaches to lockdown, about the timing of restrictions, and the effectiveness face masks.

More recently, there has also been disagreement on how vaccines should be distributed, whether vaccine passports are a good idea, and whether vaccination should be mandatory for certain occupations.

Throughout the pandemic, scientists attempting to explain their findings have had to deal with unprecedented levels of dissent, anger and abuse from the lay public and occasionally from other scientists.

Since the government lifted COVID restrictions on July 19, views on how best to handle the pandemic have become more polarised than ever, broadly splitting into two camps: the “open up” camp and the “not yet” camp.

The “open up” camp emphasises the UK’s successful vaccination programme (88% of adults have had one jab, 69% have had two), which has led to low rates of hospitalisation and death, the mild nature of COVID in children (only a fraction of under-18s are admitted to hospital, and almost all deaths have been in children who were already very ill with other conditions), potential waning of people’s patience with preventive restrictions, the dangers of lifting restrictions closer to winter, and the need to get back to normal for the sake of the economy.

The “not yet” camp calls attention to a different set of facts. COVID infections are rising rapidly in almost every region of the UK. Hospitalisation rates are rising and putting pressure on an overstretched NHS. Mild (non-hospitalised) COVID in children may still lead to long COVID, whose long-term outlook is unknown. And masks and physical distancing are evidence-based measures to reduce the spread of an airborne virus – measures that cause relatively minor inconvenience.

“Not yet” advocates propose delaying re-opening until everyone, including adolescents, have been offered vaccination and all possible measures have been put in place to make our schools, workplaces and public transport as safe as possible.

With the battle lines thus drawn, media interviewers have set up head-to-head encounters between the “open ups” and the “not yets”. We have been in the ring for such debates on opposite sides and found that these formats add heat but little light to public understanding.

It is time we recognised that this pandemic is a complex phenomenon unfolding in a complex system.

Complex systems are non-linear. In other words, small things can have large effects (the delta variant entered the UK, perhaps in just one infected person, and became dominant within weeks). And large things can have small effects (a huge, centralised test and trace system has proved inefficient and contributed little). Such dynamics make accurate prediction of the effect of interventions impossible. While scientists can estimate and speculate, none of us know for sure what will unfold.

What’s more, making decisions about the pandemic necessarily involve moral uncertainty, at both a personal and policy level. Decisions involve weighing and trading off ethical values. While we can all agree that these values are important, it can be difficult to know how and when to balance them. For example, many pandemic choices involve competition between medical risk (both to the individual and their wider contacts), equity and liberty. We can promote one or two but cannot maximise all the values at stake.

Complex systems must be handled in ways that embrace scientific and moral uncertainty. We need to observe the system, divine its patterns and key relationships, and empower people to respond to change in an agile and creative way. Above all, we need dialogue and deliberation to examine this highly complex problem from many different angles. The pragmatist philosopher John Dewey argued that only when people engage meaningfully with other people and with their ideas can we realise the potential of democracy. When we move beyond “us versus them”, we can come to better understand ourselves and be more likely to arrive at the best collective decisions.

Media hosts must rise above the catechism of both-sides journalism, which demands a superficial bare-knuckle fight between a “pro” and an “anti” voice. Instead, they should acknowledge common ground (we all want to protect our young; we all yearn to return to work and social activities) and help scientists, ethicists and others with different perspectives to work through the possibilities and trade-offs, to find common ground, to accept reasonable disagreement, to seek compromise.

For example, there are arguments both for and against giving children over 12 the COVID vaccine. Differences may be resolved partly by new data (randomised controlled trials of the benefits and harms of vaccines in this age group, or observational studies to confirm or refute the risk of long COVID), and partly by identifying sub-groups (high-risk, low-risk and low-risk but living in a household with a vulnerable person).

But the decision to vaccinate or not also requires moral deliberation on how to weigh up a putative risk to the child against a putative benefit to another household member. It also requires deliberation on how much a vaccine campaign in children would divert supplies or policy attention away from the increasingly difficult task of reaching every eligible adult that remains unvaccinated. These are issues on which the “yes” and “no” camps need to meet and talk.

None of us wanted a third (or fourth) wave. But we’re in it, and the ride will not be smooth. For the sake of our future, let’s discuss this in a way that goes beyond “oh yes it is”, “oh no it isn’t” soundbites.

Dominic Wilkinson receives funding from Wellcome Trust; also from the UKRI/AHRC as part of the UK Pandemic ethics accelerator ukpandemicethics.org