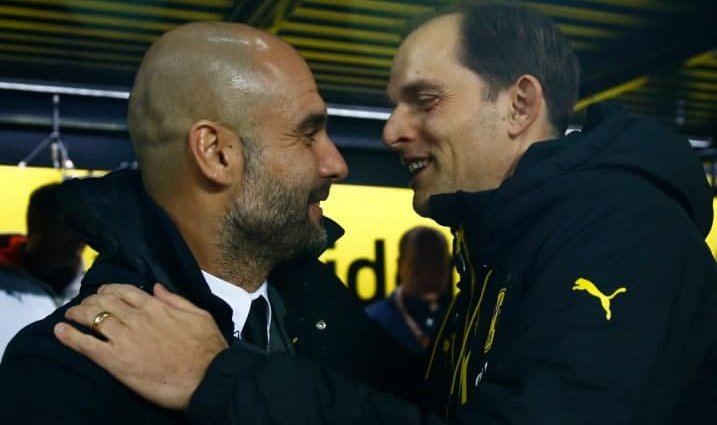 But today he plans to turn the tables on his managerial mentor.

Thomas Tuchel and Pep Guardiola enjoyed dinner together in 2014[/caption]

In December 2014, Tuchel was invited to a Munich restaurant by the man who was the king of German football at the time.

Tuchel was between jobs after walking out of Mainz and jumped at the opportunity to pick the brains of then Bayern boss Guardiola.

As the duo prepare for a Wembley reunion this afternoon, Tuchel asked: “When you are out for dinner with Pep, why not talk about football? What else was there for me to talk about?

“For me, he was a huge influence. I didn’t know him when he was at Barcelona — but I watched almost every game and was very impressed by the way he made success happen.

“Then I became the coach at Mainz and had the opportunity to play against him when he was in charge at Bayern. And that was not always such a pleasure. But every game against him at that time was a big lesson for me, so when we had dinner together in Munich obviously we talked about tactics.

“We had some drawings that we used on the table to go through all the positions and we were moving the salt and pepper pots around to explain the formations he was using.

“We were discussing how he changed Barcelona when he bought Fabregas and how to play Messi as a false nine and sometimes with a single six or a double six. Just two coaches talking about normal stuff.”

Tuchel is acutely aware he has never beaten a Guardiola team in five previous meetings while at Mainz and Borussia Dortmund.

But if all goes according to plan, he could be pitting his wits against the all-conquering Spaniard three times in the next six weeks, in the FA Cup, the Premier League and the Champions League final.

Tuchel said: “Bayern Munich with Hansi Flick and Manchester City with Pep are the benchmark in European football.

“At the moment we have to accept that there is a gap between Chelsea and Manchester City.

“But from day one of next season, we will hunt them to close the gap between us.”

This afternoon’s semi-final will provide a fascinating insight into just how much of a job Tuchel still has on his hands.

The German, 47, gave his players an extra night in Seville to recover from Tuesday’s Champions League quarter-final win over Porto, which sets up a mouth-watering clash with Real Madrid.

“We had the chance to sit outside because the weather was very warm and it was a very calming atmosphere for everybody to enjoy each other’s company.

“We created a bubble there which we cannot do here because for months the players could never go to a restaurant together.

“So we took advantage of this situation to let the players bond, to enjoy a glass of wine or a sip of beer — and to have some talks outside of tactics and line-ups.

These are all the little steps that we do to help the players to switch off sometimes — because in a schedule like this you need to be switched on a lot.

Most read in Football
FOR-GONE

“So it’s very important that, besides all this seriousness, the players must feel relaxed and have a good atmosphere together.

“We should be happy to be here and to have the privilege to be working at this level, it feels like being part of a family.”