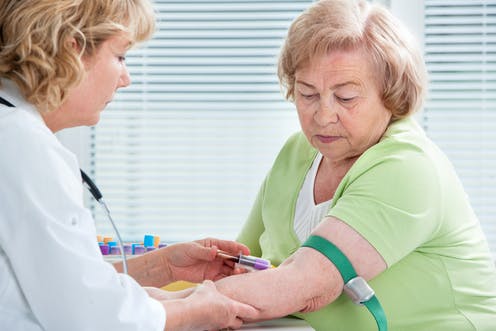 Although Parkinson’s disease affects around 1%-2% of people over the age of 65, there is currently no cure. And by the time it is diagnosed – typically by identifying problems with movement, such as slower movements and tremors – the changes in the brain it causes are irreversible. So being able to identify Parkinson’s earlier will be important in finding ways to prevent and cure the disease.

In our latest study, my colleagues and I have identified changes in blood that occur years before a Parkinson’s diagnosis. This could lead to earlier diagnosis of the disease.

The causes of Parkinson’s aren’t completely understood, but clear links have been established with genetic and environmental risk factors – such as exposure to certain pesticides and solvents. However, we do know that Parkinson’s disease causes the death of certain nerve cells in the brain, due to a combination of abnormal protein accumulation in cells, problems with mitochrondia (the “power stations” of each cell), inflammation and changes in the immune system.

In our study, we set out to examine markers of inflammation that circulate in the blood of patients with Parkinson’s disease. We found people who later developed Parkinson’s disease had fewer lymphocytes – a type of white blood cell. We also found that this change may occur at least eight years before diagnosis and may contribute to the risk of being diagnosed with Parkinson’s.

Lymphocytes are one of five types of white blood cell that aid the body’s immune response. There are two distinct sub-types of lymphocytes: B cells and T cells. B cells produce antibodies that identify and neutralise harmful microbes, while T cells control how other immune cells respond to these microbes.

To conduct our study, we used data from the UK Biobank cohort. This project recruited approximately 500,000 participants between 2006 and 2010 to study how genetics and the environment impact a wide range of diseases. Blood was collected from participants at enrolment and they had ongoing follow-up appointments throughout. Any new health conditions they were diagnosed with appeared on their health care record, which could then be linked to their UK Biobank data.

In our first analysis of the data, we found several inflammatory markers were associated with a later diagnosis of Parkinson’s disease. But as we worked through further sub-analyses, we narrowed in on lower lymphocyte count as the main difference between those who did and didn’t develop the disease.

We then went on to examine whether changes in lymphocyte count might cause Parkinson’s, or were merely a result of the disease. To do this we used a method called Mendelian randomisation. This allows us to look at a person’s genetics, and infer whether changes are cause or effect. We found genetic evidence to support that lower lymphocyte count increases Parkinson’s disease risk, as opposed to simply being a sign of undiagnosed Parkinson’s disease.

Previous studies have shown that lymphocytes are on average lower in patients with Parkinson’s disease and that this could be driven by potential reductions in both B and T cells. However, once a diagnosis of Parkinson’s has been made and medication started, other factors – such as the effect of medication – may explain lower lymphocyte counts. Our research shows these changes occur before the disease develops.

There’s still a lot more work that needs to be done before the importance of this finding is fully known. For example, future research will need to investigate which lymphocyte types (B cells or T cells) are lower. Another important question is why lymphocytes are low. Is lymphocyte production slowed, their lifespan shortened, or are they moving out of the blood into a different part of the body (such as the brain)? Once further work has been done we might better know how to build on this knowledge to develop better treatments for Parkinson’s disease – and perhaps even methods to prevent it.

2021-03-02
Previous Post: Super shoes: Explaining athletics’ new technological arms race
Next Post: Scientists have found dust from the asteroid that wiped out the dinosaurs inside the crater it left