It’s no Large Hadron Collider, but our new particle accelerator is the size of a large room 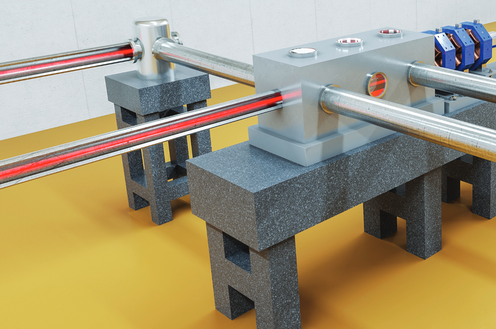 In 2010, when scientists were preparing to smash the first particles together within the Large Hadron Collider (LHC), sections of the media fantasised that the EU-wide experiment might create a black hole that could swallow and destroy our planet. How on Earth, columnists fumed, could scientists justify such a dangerous indulgence in the pursuit of abstract, theoretical knowledge?

But particle accelerators are much more than enormous toys for scientists to play with. They have practical uses too, though their sheer size has, so far, prevented their widespread use. Now, as part of a large-scale European collaboration, my team has published a report that explains in detail how a far smaller particle accelerator could be built – closer to the size of a large room, rather than a large city.

Inspired by the technological and scientific know-how of machines like the LHC, our particle accelerator is designed to be as small as possible so it can be put to immediate practical use in industry, in healthcare and in universities.

The biggest collider in the world, the LHC, uses particle acceleration to achieve the astonishing speeds at which it collides particles. This system was used to measure the sought-after Higgs boson particle – one of the most elusive particles predicted by the Standard Model, which is our current model to describe the structure and operation of the universe.

Less giant and glamorous particle accelerators have been around since the early 1930s, performing useful jobs as well as causing collisions to help our understanding of fundamental science. Accelerated particles are used to generate radioactive materials and strong bursts of radiation, which are crucial for healthcare processes such as radiotherapy, nuclear medicine and CT scans.

Read more:
Five ways particle accelerators have changed the world (without a Higgs boson in sight)


The typical downside to accelerators is that they tend to be bulky, complex to run and often prohibitively expensive. The LHC represents a pinnacle of experimental physics, but it is 27 kilometres (17 miles) in circumference and cost 6.5 billion Swiss francs (£5.2 billion) to build and test. The accelerators currently installed in select hospitals are smaller and cheaper, but they still cost tens of millions of pounds, and require 400x400m of space for installation. As such, only large regional hospitals can afford the money and the space to host a radiotherapy department.

Why exactly do accelerators need to be so big? The simple answer is that if they were any smaller, they’d break. Since they’re based on solid materials, ramping up the power too much would tear the system apart, creating a very expensive mess.

We set out to find a way to make smaller, cheaper particle accelerators for use in a wider range of hospitals – from the large and regional to the small and provincial.

Our team worked on the premise that to accelerate particles you actually have two options: either give them a strong boost over a short distance, or lots of small nudges over a long one – which is how the LHC works.

It’s a bit like reaching 100mph in a vehicle: you can either slowly accelerate in a truck over a long period of time, or you can put your foot down in a sports car and get there in a matter of seconds. Conventional accelerators are a bit like trucks: reliable and docile, but slow. We’ve been searching for the sports car alternative.

We found that alternative in plasma. The beauty of plasma is that it’s just composed of an ionised gas: a gas that’s been broken down to its tiniest components. As such, it doesn’t have the same limit on the power that can be applied to it as a solid system. In effect, you can’t break something that is already broken.

It’s in this sense that plasmas can sustain much higher accelerating powers – up to a thousand times larger than a solid-state accelerator. The higher the power, the shorter time and distance it takes to accelerate particles, and this leads to smaller, cheaper accelerators.

Our accelerator uses powerful lasers to “shake” the plasmas it contains, moving their particles about in a way that creates waves. It’s a little like the wake left behind by a boat (the laser) on a lake (the plasma). Like a surfer, a beam placed on one of these waves can then be pushed forward by it, constantly accelerating. These waves within plasmas are very small (sub-millimetre) and very powerful, which is what allows the overall accelerator to be extremely small.

Plasma-based particle accelerators like ours will need 100 times less space than existing designs, reducing the space required for installation from 400x400m to just 40x40m. The hardware needed to build our accelerator is cheaper to install, run and maintain. Overall, we expect our plasma accelerator to reduce the cost of installing an accelerator in a hospital by a factor of ten.

Besides these two advantages, our accelerator can perform certain new functions that existing accelerators cannot. For instance, plasma-based accelerators can provide detailed X-rays of biological samples with far greater clarity than those that exist today. By providing a better image of the inside of a human body, this could help doctors find cancer at a much earlier stage, dramatically increasing the chance of successfully treating the illness.

The same ultra-high resolution imaging can also help spot the early signs of cracks and defects on machinery, at nanometer scale. Faults related to such defects are regarded as one of the “six big losses” well known to manufacturers. Their early detection by our accelerator could help extend the lifetime of high-precision, high-quality components in heavy industry and manufacturing.

The European Strategy Forum on Research Infrastructures is assessing the design report, with a decision expected in summer 2021. If successful, construction of the first two prototypes is expected to be completed by 2030, with access to external users to be granted immediately after.

Several years of interdisciplinary research were needed for us to form the first detailed and realistic design of a machine of this kind. Our plasma accelerator is the most recent example of how obscure, abstract, fundamental physics can enter into our everyday lives – cutting research costs, improving manufacturing and helping to save lives.

This article was updated on February 23 2021 to clarify that the EuPRAXIA particle accelerator is designed to perform a different set of tasks than those performed by the Large Hadron Collider.

2021-02-23
Previous Post: Why Mario Draghi taking charge of Italy is great news for the EU (and also America)
Next Post: Breast cancer: is milk a risk factor?