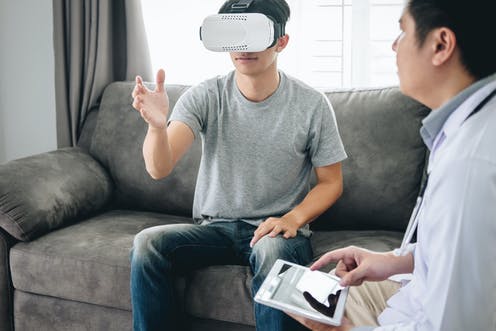 With one in four of us expected to experience a mental health problem at any one time, increasing access to treatment has become essential. But doing so is challenging. Therapists require extensive training, and the most effective forms of therapy involve coaching patients in everyday situations, which is time-consuming and therefore costly.

The most successful therapeutic interventions help people to modify the way they think, react, and behave in the very situations they find most challenging. This could be anything from getting on a crowded bus, to going to a social event, to simply leaving the house.

We tend to remember information best when we’re in the same physical or mental state as we were when the memory was initially formed. This is known as state dependent learning. So for example, if we want someone to remember a technique that will help reduce their anxiety while food shopping, it’s generally best to actually visit a supermarket during the therapy session in order to train and practise the technique.

Such active “in-situ” coaching can rarely happen in mental health services because of factors like cost and time. This is where VR can help.

VR environments create immersive simulations of real world environments, allowing you to walk around and interact with the environment as if it were real. You can enter the situations you typically find challenging, and learn psychological techniques to overcome your difficulties alongside a virtual or real-life therapist.

Crucially, although we know the VR environment is just a simulation, we nonetheless respond as we would in the corresponding real-world environment, both psychologically and physiologically. As a result, any learning that’s made in VR transfers to the real world.

In one study of 30 patients with severe paranoid beliefs, fear of real-world social situations halved after a single VR coaching session. Similar findings have been seen for a range of other experiences, such as fears of height and social anxiety.

Not only is VR more practical, but people are generally more willing to enter virtual versions of the situations they find anxiety-provoking because they know it’s only a simulation. It’s also easier to repeatedly try things out that are too scary or perhaps too embarrassing to try in the real world.

VR scenarios can also be graded in difficulty or even personalised for each person. In a VR study at the University of Oxford on treating fear of heights, participants began in the virtual atrium of a ten-storey building and were then able to choose which floor to go to. The idea was to begin practising on the lower, less scary floors, and work their way up as they became more confident.

VR also allowed the researchers to make some of the scenarios more fun for participants – such as having tasks where you rescued a kitten or had to pop bubbles. This added flexibility in how participants were able to confront their fear may be one reason why their reductions in fear of heights exceeded those seen in traditional exposure therapy.

The flexibility of VR also means it can be adapted to help treat a range of mental health problems. VR treatments have been developed for many other phobias, such as spiders, as well as for other disorders such as PTSD, social anxiety, depression, eating disorders, psychosis, and addiction.

Perhaps the most significant advantage of VR therapies is that they can be automated. This means that in VR there can be a virtual coach with you who explains the therapy and teaches you the psychological techniques to try out.

For example, our team has developed a virtual coach named Nic, who is used in our ongoing research into VR for mental health treatment. Nic provides encouragement to users and gives them ideas of psychological techniques to try during treatment.

Virtual coaches like Nic can work like a therapist without a therapist actually needing to be present at every VR session. Instead, a graduate psychologist or peer supporter (such as someone who has lived through a similar experience) can lead the sessions with the user, providing support and guidance alongside the virtual coach.

Because there are many more graduate psychologists and peer supporters available than highly trained therapists, VR therapy can help ensure more people are able to access the treatment they may need, without delay. VR treatment is also likely to be more affordable for the same reason.

Continuous improvements to VR hardware mean it’s becoming increasingly affordable and feasible to potentially use this technology in mental health services in the near future for the treatment of a range of conditions. While it would never replace therapists, it could improve the number of people able to access therapy.

Poppy Brown does not work for, consult, own shares in or receive funding from any company or organisation that would benefit from this article, and has disclosed no relevant affiliations beyond their academic appointment.