The human genome at 20: how biology’s most-hyped breakthrough led to anticlimax and arrests 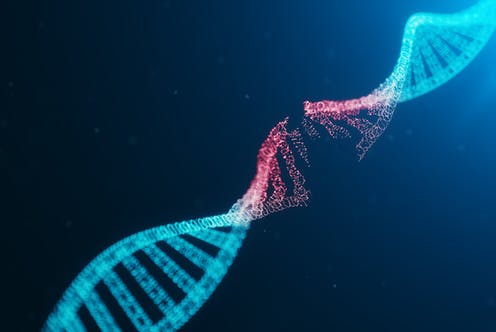 When President Bill Clinton took to a White House lectern 20 years ago to announce that the human genome sequence had been completed, he hailed the breakthrough as “the most important, most wondrous map ever produced by humankind”. The scientific achievement was placed on par with the moon landings.

It was hoped that having access to the sequence would transform our understanding of human disease within 20 years, leading to better treatment, detection and prevention. The famous journal article that shared our genetic ingredients with the world, published in February 2001, was welcomed as a “Book of Life” that could revolutionise medicine by showing which of our genes led to which illnesses.

But in the two decades since, the sequence has underwhelmed. The potential of our newfound genetic self-knowledge has not been fulfilled. Instead, what has emerged is a new frontier in genetic research: new questions for a new batch of researchers to answer.

Today, the gaps between our genes, and the switches that direct genetic activity, are emerging as powerful determinants behind how we look and how we get ill – perhaps deciding up to 90% of what makes us different from one another. Understanding this “genetic dark matter”, using the knowledge provided by the human genome sequence, will help us to push further into our species’ genetic secrets.

Cracking the human genetic code took 13 years, US$2.7 billion (£1.9 billion) and hundreds of scientists peering through over 3 billion base pairs of proteins in our DNA. Once mapped, our genetic data helped projects like the Cancer Dependency Map and the Genome Wide Association Studies better understand the diseases that afflict humans.

But some results were disappointing. Back in 2000, as it was becoming clear the genome sequence was imminent, the genomics community began excitedly placing bets predicting how many genes the human genome would contain. Some bets were as high as 300,000, others as low as 40,000. For context, the onion genome contains 60,000 genes.

Read more:
Explainer: what is a gene?


Dispiritingly, it turned out that our genome contains roughly the same number of genes as a mouse or a fruit fly (around 21,000), and three times less than an onion. Few would argue that humans are three times less complex than an onion. Instead, this discovery suggested that the number of genes in our genome had little to do with our complexity or our difference from other species, as had been previously assumed.

Access to the human genome sequence also presented the scientific community with a huge number of important ethical questions,
underscored in 2000 by Prime Minister Tony Blair when he cautioned: “With the power of this discovery comes the responsibility to use it wisely.”

Ethicists were particularly concerned about questions of “genetic discrimination”, like whether our genes could be used against us as evidence in a court of law, or as a basis for exclusion: a new kind of twisted hierarchy determined by our biology.

Some of these concerns were addressed by legislation against genetic discrimination, like the US Genetic Information Nondiscrimination Act of 2008. Other concerns, like those around so-called “designer babies”, are still being put to the test today.

Read more:
Should we edit the genomes of human embryos? A geneticist and social scientist discuss


In 2018, human embryos were gene edited by a Chinese scientist, using a method called CRISPR which allows targeted sections of DNA to be snipped off and replaced with others. The scientist involved was subsequently jailed, suggesting that there remains little appetite for human genetic experimentation.

On the other hand, to deny available genetic treatments to willing patients may one day be considered unethical – just as some countries have chosen to legalise euthanasia on ethical grounds. Questions remain about how humanity should handle its genetic data.

With human gene editing still highly contentious, researchers have instead looked to find out which genes may be responsible for humanity’s illnesses. Yet when scientists investigated which genes are linked to human diseases, they were met with a surprise. After comparing huge samples of human DNA to find whether certain genes led to certain illnesses, they found that many unexpected sections of the genome were involved in the development of human disease.

The non-coding genome, which makes up the remaining 98.3% of our DNA, doesn’t code proteins. This largely unknown section of the genome was once dismissed as “junk DNA”, previously thought to be useless. It contained no protein-creating genes, so it was assumed the non-coding genome had little to do with the stuff of life.

Within this non-coding part of the genome, researchers have subsequently found short regions of DNA called enhancers: gene switches that turn genes on and off in different tissues at different times. They found that enhancers needed to shape the embryo have changed very little during evolution, suggesting that they represent a major and important source of genetic information.

These studies inspired one of us, Alasdair, to explore the possible role of enhancers in behaviours such as alcohol intake, anxiety and fat intake. By comparing the genomes of mice, birds and humans we identified an enhancer that has changed relatively little over 350 million years – suggesting its importance in species’ survival.

When we used CRISPR genome editing to delete this enhancer from the mouse genome, those mice ate less fat, drank less alcohol, and displayed reduced anxiety. While these may all sound like positive changes, it’s likely that these enhancers evolved in calorifically poor environments full of predators and threats. At the time, eating high-calorie food sources such as fat and fermented fruit, and being hyper-vigilant of predators, would have been key for survival. However, in modern society these same behaviours may now contribute to obesity, alcohol abuse and chronic anxiety.

Intriguingly, subsequent genetic analysis of a major human population cohort has shown that changes in the same human enhancer were also associated with differences in alcohol intake and mood. These studies demonstrate that enhancers are not only important for normal physiology and health, but that changing them could result in changes in behaviour that have major implications for human health.

Given these new avenues of research, we appear to be at a crossroads in genetic biology. The importance of gene enhancers in health and disease sits uncomfortably with our relative inability to identify and understand them.

And so in order to make the most of the sequencing of the human genome two decades ago, it’s clear that research must now look beyond the 1.7% of the genome that encodes proteins. In exploring uncharted genetic territory, like that represented by enhancers, biology may well locate the next swathe of healthcare breakthroughs.

Andreas Kolb does not work for, consult, own shares in or receive funding from any company or organisation that would benefit from this article, and has disclosed no relevant affiliations beyond their academic appointment.

2021-02-19
Previous Post: COVID vaccine and asthma: why most sufferers won’t be prioritised in the next phase of rollout
Next Post: Strategic Waste & Resources Manager