Nagorno-Karabakh: are Armenia and Azerbaijan sliding towards all-out war? 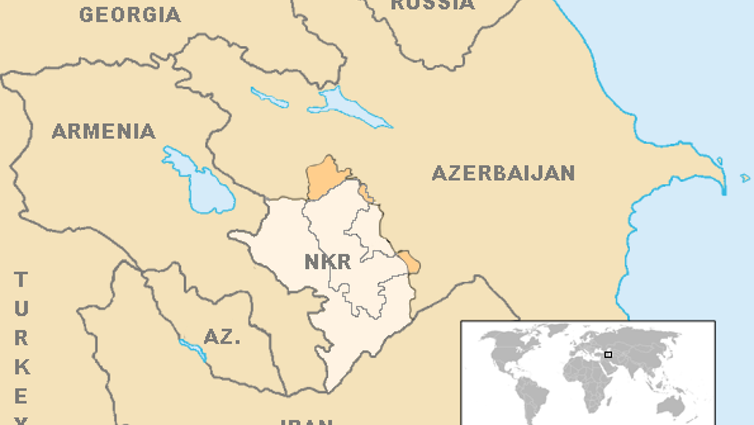 Nagorno-Karabakh is a place name few in the West will recognise. But this small, unrecognised mountainous state with a population of about 150,000, is now the site of deadly ongoing clashes between Armenia and Azerbaijan.

Nagorno-Karabakh, known in Armenian as Artsakh, has been the object of a protracted conflict between two peoples of the South Caucasus since before the fall of the Soviet Union. The territory’s mostly Armenian inhabitants declared independence from Azerbaijan in late 1991, with Armenia’s support. Attempts by Azerbaijan to reimpose its authority led to a fight for ownership which turned into the bloodiest of the many conflicts that followed the fall of the Soviet Union.

Between 1991 and 1994, both sides sacrificed over 30,000 people, and ethnically cleansed each other from areas under their control.

A ceasefire was finally signed in 1994, leaving the unrecognised Nagorno-Karabakh Republic, and a swathe of land surrounding it in Armenian hands. Tortuous negotiations continued over several decades, led by Russia, France and the US. But there was very little progress towards a final resolution.

Since September 27, the two adversaries appear to have relapsed into war, with heavy battles reported along the sections of the front line near the territory. These most serious clashes since 1994 have left at least 65 dead at the time of writing. Both sides are using a wide range of military equipment, including heavy tanks, long-range artillery and drones.

As both countries declared martial law and decreed mobilisations, the rhetoric in the Armenian capital Yerevan and Azerbaijani capital Baku has been uncompromising.

In Armenia, this is seen as nothing less than a struggle for survival. A recurring theme in both official circles and the country’s media has been the possible extermination of the Armenians of Nagorno-Karabakh. Links are made with the 1915 Armenian genocide by the Ottoman Empire, especially in light of Turkey’s support for Azerbaijan.

In Azerbaijan, on the other hand, the war has been presented as an opportunity to right the wrongs of 1991-94 by bringing the territory back under Azerbaijani control, allowing hundreds of thousands of displaced people to return home.

This latest fighting has a number of drivers. In the short term, Azerbaijan’s authoritarian president, Ilham Aliyev, was under pressure to correct setbacks suffered by the Azerbaijani forces during earlier clashes on the border with Armenia in July. The setbacks led to spontaneous demonstrations in Baku by citizens calling for the resignation of the armed forces’ chief of staff, and an all-out war against the Armenian side.

As a result, Azerbaijan’s longtime foreign minister was replaced. Azerbaijan has also upgraded its already close relationship with its traditional ally, Turkey, which has made public assertions of unconditional support. Along with its stated readiness to engage in intensified military co-operation, this has probably bolstered Aliyev’s confidence.

Seen over the longer term, this escalation must be viewed in terms of the intractable nature of the negotiations surrounding the conflict. Azerbaijan has shown increased frustration with the ongoing negotiations in recent years, especially after unmet expectations for a breakthrough following Armenia’s 2018 Velvet Revolution.

The absence of a definitive solution has also allowed Armenia to present its control of the unrecognised Republic of Nagorno-Karabakh as the new normal. It has also gradually hardened its public position that the lands surrounding the territory are also Armenian.

Azerbaijan has invested billions of petro-dollars in state-of-the art military hardware, and sunk plenty of social capital into the promise of regaining control over Nagorno-Karabakh. This puts Aliyev under increasing pressure to force some movement on the matter.

This is undoubtedly a highly dangerous phase in the conflict. The unequivocal support by Turkey for Azerbaijan could draw it into the confrontation, especially if Azerbaijan were seen to be losing ground. Reports of Turkey hiring Syrian rebel fighters to serve in Azerbaijan would, if confirmed, also be perceived as highly provocative by Moscow in light of the proximity of the restless North Caucasus, inviting a potential response.

Hostilities could also spill into Nakhichevan, a part of Azerbaijan separated by a band of Armenian territory, whose status is subject to a Turkish guarantee under a Soviet-era treaty. Unlike a confrontation in Nagorno-Karabakh, a direct attack on Armenia proper – from Nakhichevan or elsewhere – could trigger Russia’s defence commitments under the Collective Security Treaty Organization, with potentially very serious repercussions beyond the region itself.

With the stakes high, the UN is holding an emergency meeting on the issue. Separate diplomatic contacts between the belligerents and Russia, Turkey and others are already underway. But even if that were successful in achieving a ceasefire, this would still leave the more important, longer-term problem: how to resolve an issue which strikes at the core of the identities of both Armenians and Azerbaijanis.

Over the past decades, these two peoples have developed views of history that are exclusive and exclusionary in the extreme. Anyone striving for peace will have to change history before being able to write the future. And that would be quite a circle to square.

Kevork Oskanian does not work for, consult, own shares in or receive funding from any company or organisation that would benefit from this article, and has disclosed no relevant affiliations beyond their academic appointment.