Mars: mounting evidence for subglacial lakes, but could they really host life? 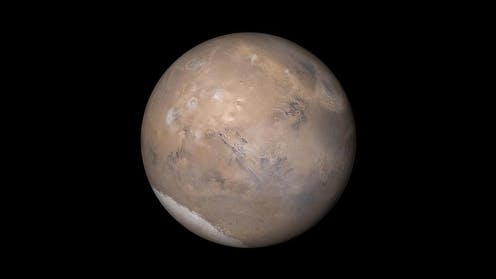 Venus may harbour life some 50km above its surface, we learned a couple of weeks ago. Now a new paper, published in Nature Astronomy, reveals that the best place for life on Mars might be more than a kilometre below its surface, where an entire network of subglacial lakes has been discovered.

Mars was not always so cold and dry as it is now. There are abundant signs that water flowed across its surface in the distant past, but today you’d struggle to find even any crevices that you could call moist.

There is nevertheless plenty of water on Mars today, but it’s virtually all frozen, so not much use for life. Even in places where the noon-time temperature creeps above freezing, surface signs of liquid water are frustratingly rare. This is because the atmospheric pressure on Mars is too slight to confine water in its liquid state, so ice usually
turns directly into vapour when heated.

It is beginning to look as if the most favourable place for liquid water on Mars is beneath its vast south polar ice cap. On Earth, such lakes began to be discovered in Antarctica in the 1970s, where nearly 400 are now known. Most of these have been found by “radio echo sounding” (essentially radar), in which equipment on a survey aircraft emits radio pulses.

Part of the signal reflects back from the ice surface, but some is reflected from further below – especially strongly where there is a boundary between ice and underlying liquid water. Antarctica’s largest subglacial lake is Lake Vostok – which is 240km long, 50km wide and hundreds of metres deep – located 4km below the surface.

Indications of similar lakes below the southern polar ice cap of Mars were first suggested by radar reflections 1.5km below the ice surface in a region named Ultimi Scopuli. These were detected between May 2012 and December 2015 by MARSIS (Mars Advanced Radar for Subsurface and Ionosphere Sounding), an instrument carried by the European Space Agency’s Mars Express that has been orbiting the planet since 2003.

The new study of MARSIS data using signal processing techniques that take account of both the intensity and the sharpness (“acuity”) of the reflections has demonstrated that the previously detected region does indeed mark the top of a liquid body. This is the Ultimi Scopuli subglacial lake, and there seem also to be smaller patches of liquid nearby in the 250km by 300km area covered by the survey. The authors suggest that the liquid bodies consist of hypersaline solutions, in which high concentrations of salts are dissolved in water.

They point out that salts of calcium, magnesium, sodium and potassium are known to be ubiquitous in the martian soil, and that dissolved salts could help to explain how subglacial lakes on Mars can remain liquid despite the low temperature at the base of the ice cap. The weight of the overlying ice would supply the pressure necessary to keep the water in liquid state rather than turning to vapour.

Lake Vostok is touted as a possible habitat for life that has been isolated from the Earth’s surface for millions of years, and as an analogue for proposed environments habitable by microbes (and possibly more complex organisms) in the internal oceans of icy moons such as Jupiter’s Europa and Saturn’s Enceladus.

Although hypersaline water would give microbes a place to live below Mars’ south polar cap, without an energy (food) source of some kind they could not survive. Chemical reactions between water and rock might release some energy but probably not enough; it would help if there was an occasional volcanic eruption, or at least hot spring, feeding into lake.

Read more:
What on Earth could live in a salt water lake on Mars? An expert explains


We lack evidence of this on Mars, unlike on Europa and Enceladus. Although the new findings make Mars even more interesting than before, they haven’t advanced its ranking in the list of solar system bodies most likely to host life.

That said, the salty water could act as a preservation chamber – helping us find alien organisms that are now extinct but once came to Mars from other parts of the solar system.

David Rothery is Professor of Planetary Geosciences at the Open University. He is co-leader of the European Space Agency's Mercury Surface and Composition Working Group, and a Co-Investigator on MIXS (Mercury Imaging X-ray Spectrometer) that is now on its way to Mercury on board the European Space Agency's Mercury orbiter BepiColombo. He has received funding from the UK Space Agency and the Science & Technology Facilities Council for work related to Mercury and BepiColombo, and is currently funded by the European Commission under its Horizon 2020 programme for work on planetary geological mapping (776276 Planmap). He is author of Planet Mercury – from Pale Pink Dot to Dynamic World (Springer, 2015), Moons: A Very Short Introduction (Oxford University Press, 2015) and Planets: A Very Short Introduction (Oxford University Press, 2010). He is Educator on the Open University's free learning Badged Open Course (BOC) on Moons and its equivalent FutureLearn Moons MOOC, and chair of the Open University's level 2 course on Planetary Science and the Search for Life.

2020-09-28
Previous Post: Breastfeeding during lockdown: how coronavirus had a devastating impact on some new families
Next Post: After documenting land grabs in their reserve, 18 indigenous and black leaders detained in Nicaragua · Global Voices