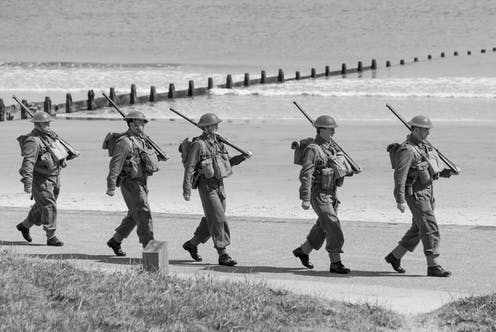 The present government’s struggle to get Britain back to work amid the pandemic looks a little less daunting when compared to the challenge that faced its predecessor in 1945. In her fine account of the war’s end, historian Maureen Waller reminds us that at the beginning of September 1945, 4,243,000 men and 437,000 women were serving in the armed forces. Many were frantic to come home and their skills were needed desperately.

Ernest Bevin, minister of labour in the wartime coalition, had started planning for their demobilisation in 1942, but his plans had assumed that war against Japan would drag on after the defeat of Germany, allowing time for gradual demobilisation. Instead, the atomic attacks on Hiroshima and Nagasaki brought the fighting to a sudden end. Labour’s victory in the 1945 general election added to the pressure: the party’s manifesto had promised immense change.

Social historian David Kynaston recalls the problems facing the new government. Three quarters of a million homes had been destroyed or were badly damaged and much surviving housing consisted of “Victorian slums in the major cities and large pockets of overcrowded, inadequate-to-wretched housing almost everywhere”. National debt had ballooned to £3.5 billion.

With Bevin promoted to foreign secretary, his successor at Labour and National Service was the veteran trades unionist George Isaacs. In September 1945, Isaacs represented the government at the Trades Union Congress (TUC) conference in Blackpool. My own research in historic newspaper archives reveals the mood of delegates meeting there.

The Manchester Guardian gave extensive coverage to a speech by the former miner, now TUC President Ebby Edwards on September 11 1954. Edwards insisted that manpower was the key to reconstruction. On VE Day, civilian industries employed 4 million fewer workers than in 1939. Edwards warned that “if the government is so ill-advised as to attempt to hold men in the national forces indefinitely, there will be grave danger of a repetition of the incidents that marked demobilisation at the end of the last war”.

The demobilisation scheme devised in 1917 meant that men who had served longest were generally the last to be demobilised. This provoked mutinies at British army camps in Calais and Folkestone and a demonstration by 3,000 soldiers in central London.

The Manchester Guardian reported that Clement Attlee, who became the Labour prime minister in July 1945, was acutely aware that demobilisation in 1945 must be fairer and faster. Attlee estimated that to get industry and services working again “an increase of about 5 million workers was required”. He said his government was determined “to do justice between all those who were serving and in particular to those serving overseas”.

The Times, still, in 1945 an elite, establishment broadsheet, was not an instinctive cheerleader for Attlee’s proudly socialist government. On September 14 1945 its editorial regretted the absence of “detailed information about many important aspects of demobilization policy”.

The Times conceded that: “Since the final surrender in South-East Asia occurred so recently … Ministers may reasonably ask for a few weeks more to complete their plans.” However, Britons would “expect an early instalment of the speeding up of which, as the Prime Minister has said, the demobilization plan is capable”.

The Economist, a weekly political publication read by opinion formers, took the view that Bevin’s original plan for demobilisation was based on sound principles. He had recognised that those who had served longest should be released from the armed services first. His scheme gave priority to housebuilders who had urgently needed skills. However, The Economist sought a rebalancing of military and civilian power. “Instead of the service departments telling the civilians how many they can release,” it declared on September 15, “the civilians should tell the military how many they may keep”. Speed was essential.

For soldiers, sailors and airmen who had been abroad for years, no return date could be too early. If today’s government is grappling with a desperately complex balancing of risk and reward, their predecessors faced an equally urgent desire for the fairer world Labour had promised its voters. A few at least were already displaying their impatience in letters to the fiercely pro-government Daily Mirror, which remained determined to represent “the ordinary bloke in all three services” and to voice “the grumbles and grievances of the private, the rating and the erk” (slang for an aircraftsman of the lowest rank in the Royal Air Force).

No politician under such pressure could fail to feel gratitude towards a loyalist of RAF man and Mirror reader I.A.C. Guthrie’s calibre. In his letter, published in the Mirror on September 24 1945, Guthrie defended the demobilisation scheme against “Irresponsible statements by public nonentities” who had convinced “numbers of servicemen that they are receiving a raw deal over demobbing”. This was unfair to Attlee’s new administration he explained, adding: “Only an irresponsible government would have tried to impress by a ‘lighting demob’ that would have done irretrievable harm to the country.”

Today such tribal loyalty is most frequently expressed not in newspapers but via social media, and not always in such polite English. Seventy-five years ago, this crisis ended reasonably well for Labour. Waller records that Attlee’s government demobilised a third of the armed forces by Christmas 1945 and the rest by Easter 1946.

Tim Luckhurst has received research funding from News UK and Ireland Ltd. He is a member of the Society of Editors and the Free Speech Union. This article is based on research for his current work in progress, a book for Bloomsbury Academic under the provisional title Reporting the Second World War. Newspapers and the Public in Wartime Britain