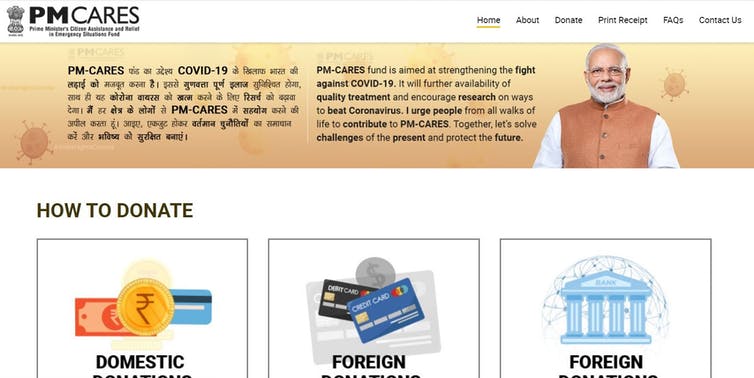 Since India overtook Brazil in September to become the country with the second largest number of coronavirus cases in the world (after the US), the response of the government of Narendra Modi has come under even tighter scrutiny.

In late March, Prime Minister Modi announced the formation of a special fund to address the emergency situation caused by the COVID-19 pandemic. Called the Prime Minister’s Citizen Assistance and Relief in Emergency Situations Fund (PM-CARES Fund), it has attracted controversy right from the start.

According to its official website, the fund was set up to collect donations from India and abroad to “undertake and support relief or assistance of any kind relating to a public health emergency or any other kind of emergency”. The website says the fund will provide financial assistance and grants to affected populations.

But the prime minister’s office has refused to provide exact details of donations made to the fund or make public decisions about how the donations are being used.

Several information seekers, including me, have tried to use India’s Right to Information (RTI) Act, which facilitates access to government files and records, to find out more details about the fund. We have been blocked, with a number of requests for information turned down by Modi’s office on the grounds that the fund is a public charitable trust and not a “public authority” as defined under the RTI act.

The fund’s website claims that in the financial year ending March 2020, 20 billion rupees (£210 million) was spent on supplying 50,000 ventilators manufactured by Indian firms to government hospitals. It also says that 10 billion rupees was given to state governments to assist migrant labourers, and that another 1 billion rupees was allocated to support COVID-19 vaccine development efforts.

But when the transparency activist Anjali Bhardwaj sent an RTI request to the ministry of health about the ventilators, the response showed that only 17,100 were eventually allocated or dispatched to states and union territories by July 20. Bhardwaj’s response also revealed that two of the firms received funding even though they hadn’t been recommended by a technical committee.

So far, it’s also been impossible to verify through RTI queries what other money was spent giving assistance to migrant labourers, or which of India’s 25 vaccine development initiatives the PM-CARES fund has supported.

In late August, Modi’s office announced the fund would finance two 500-bed hospitals in Bihar. But this has further fuelled controversy, with the announcement seen by some opposition figures as a political move ahead of assembly elections due in the state in October given that other states have higher numbers of cases.

And in September, the Supreme Court struck down a petition demanding that money from the fund be transferred to the National Disaster Response Fund to finance COVID-19 relief work.

The union minister, Ravi Shankar Prasad, has hit out at political opponents who were demanding accountability for the PM-CARES Fund. While he claimed that “transparency was writ large” in the way the fund functions, it’s curious that the prime minister’s office continues to block legitimate queries about it.

In late August, I filed an RTI application seeking various details of the charitable trust under which the PM-CARES Fund had been registered, and which state regulatory authority was monitoring the trust. But I was refused information on the grounds that the fund was not a public authority.

As transparency campaigner Lokesh Batra told me, the entire credibility of the new PM-CARES Fund relies upon Modi making appeals for donations. Its website uses a gov.in domain which is reserved for government bodies. The fund is housed in the prime minister’s office and uses its address. Several of Batra’s right for information queries on the fund have also been denied since April.

Those holding high office are often reluctant to be transparent about government affairs, fearing political consequences. During my PhD fieldwork on the right to information movement in India, I’ve been observing how information received under the act influences public perception about government performance. This information can be used by political opponents to delegitimise those in power. Such competitive politics, however, helps to deepen democracy and keep the misuse of power in check.

When Modi’s Bharatiya Janata Party (BJP) won a majority in India’s 2014 election, it was helped by the previous Congress coalition falling prey to two major corruption scandals. Both these scandals, surrounding the allocation of 2G spectrum and the Commonwealth Games, were brought to light through the use of the RTI act.

Now that the heat of public scrutiny is on the current BJP government in the middle of the pandemic, it’s their turn to demonstrate that donations to the PM-CARES Fund are being put to proper use.

Vidya Venkat is affiliated with the National Campaign for People's Right to Information in New Delhi for research purposes.