Novichok: how are victims surviving poisoning? 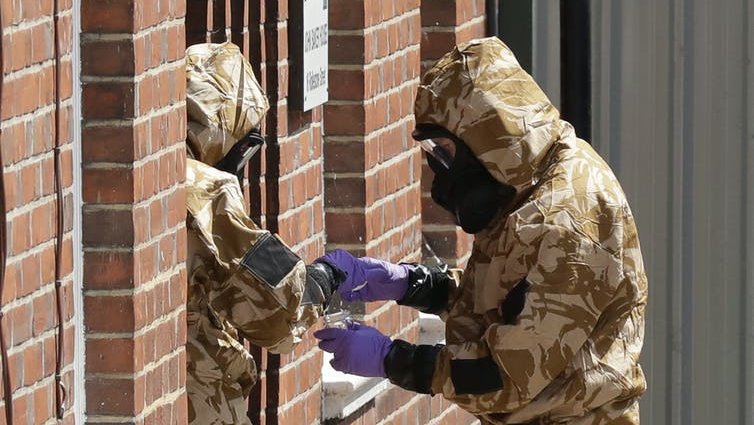 Russian opposition leader Alexei Navalny is likely to survive a suspected poisoning with the nerve agent Novichok, according to the hospital treating him. There have now been at least six known cases of serious Novichok poisoning in the past two years. But only one victim tragically died from it.

Why is that? Is the substance less lethal than previously thought? Or could it be that the stockpile of the nerve agent is degrading?

Nerve agents were discovered through pesticide research. They belong to a group of substances known as organophosphorus chemicals, or “OPs” for short. There are literally thousands of OP substances, many of which can damage the body by inhibiting a family of enzymes known as “cholinesterases” that are critical to regulating the activity of the central nervous system in animals.

By disrupting the nervous system, Novichok and other nerve agents can kill people through asphyxiation or cardiac arrest. We know they are deadly. The nerve agent Sarin caused multiple casualties in 1995 when it was released in the Tokyo subway.

The nerve agent VX is thought to have killed Kim Jong-nam, the half brother of North Korea’s leader Kim Jong-un, in just 20 minutes after it was allegedly smeared across his face. But all types of nerve agent poisoning can be treated with standard antidotes such as atropine and diazepam.

Little is known about the types of Novichok that have been synthesised or deployed in assassination attempts, other than that they tend to be liquids or powders.

The dose makes the poison

One of the fundamental principles of toxicology was first proposed by a 16th century alchemist, known as Paracelsus, who is often credited with the statement “sola dosis facit venenum”, or “the dose makes the poison”. It means that all substances are capable of being toxic if administered in a sufficient dose. This applies to normally innocuous chemicals such as water, as well as highly toxic materials such as nerve agents.

So have the recent Novichok victims somehow got smaller doses than intended? In the case of the poisoning of Sergei and Yulia Skripal in Salisbury, UK, in 2018, it appears that the poison was initially applied to a door knob.

While the applied dose may have been quite large, possibly equating to several thousand lethal doses, the amount transferred to their skin would have been a fraction of that. The palm of the hand is also one of the least permeable areas of the human body, which would reduce the rate of absorption into the body.

Subsequent contact with other surfaces through normal daily activities would be expected to further reduce the dose on the victims’ hands. This means that the net dose absorbed by the skin would have been relatively small in comparison to the original amount.

In the case of the Skripals, this was still sufficient to cause life-threatening toxicity after a delay of several hours. The fact that they were quickly given appropriate antidotes and supportive therapies was instrumental in their survival.

Two police officers were subsequently also poisoned with the substance when searching Skripals’ home – and both survived. It is possible that they received an even lower dose of Novichok than the Skripals.

Soon after the incident, two more people were poisoned in nearby Amesbury. Tragically, one victim, Dawn Sturgess, died. She had unknowingly sprayed Novichok directly onto her wrist from a perfume bottle her partner had found nearby.

This would undoubtedly have resulted in a much higher dose than the Skripals received and was applied to a thinner, more permeable area of skin. The fact that the onset of poisoning was much faster (minutes) than in the case of the Skripals tends to support this idea.

Strurgess’ partner, Charlie Rowley, reportedly spilled some of the contents of the perfume bottle onto his hands, but immediately washed off the oily residue. Immediate decontamination is known to be a highly effective practice against nerve agents and is the recommended initial treatment strategy for chemically contaminated casualties in the UK and USA. It is likely that this action saved the life of Rowley.

In the case of Navalny, it has been reported that he was poisoned through a contaminated cup of tea. As the amount added to the beverage is likely to have been multiples of a lethal dose, how did he survive?

The exact details of the incident are not available, but a variety of factors may have influenced the dose he absorbed. For example, he may just have had just a few sips rather than the whole cup. Initial reports indicate that Navalny also vomited. We also don’t know if the Novichok was adequately dissolved in the tea. These factors may all have contributed to lowering the dose.

The inherent toxicity of nerve agents is a clear attraction to would-be assassins, as are other poisons such as arsenic, cyanide and ricin. However, the practical difficulties in disseminating any type of poison will introduce a wide margin of error in dosing.

Current information suggests that Novichok agents are chemically stable and are manufactured to high purity in specialist production facilities. Therefore, surviving exposure is unlikely to be due to “poor quality” Novichok. The substance is no doubt lethal and has resulted in the death of innocent people as well as the intended victims.

This article is wholly based on information available in the public domain. The opinions stated are those of the author and do not reflect the views, opinions or policies of any government department.

Robert Chilcott has previously received funding to investigate mass casualty decontamination protocols from the UK's Home Office and Department of Health, the European Union, and the US Biomedical Advanced Research and Development Authority (BARDA).