Brexit: as the deadline looms, why are negotiations stalling? 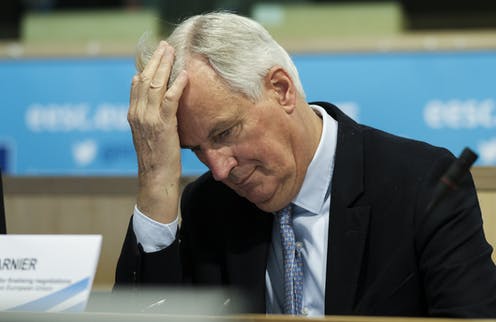 A brief stocktaking of the negotiations to date illustrates how they differ from other EU trade negotiations, and how this might affect the outcome.

For one thing, there is a deadline, and the timeframe is extremely tight. There is often a political incentive to conclude trade agreements quickly, as was the case when the EU and Japan intensified negotiations to sign a trade deal to show their commitment to international trade following the US withdrawal from the Trans-Pacific Partnership. But there is never a legal deadline.

In contrast, the trade deal between the EU and the UK must be decided before a specific date or the UK will simply leave the current trading arrangements without a deal. Prime Minister Boris Johnson could have asked for an extension to the transition period but he chose not to. This was despite pressure from opposition parties and businesses worried about being able to prepare for new trading arrangements while also having to deal with the effects of COVID-19.

Given the two months needed for the EU’s institutions to formally ratify the agreement, the negotiating teams need to agree on a final text by the end of October at the latest. While it is in both parties’ interest to reach a deal, it will be difficult given that their positions remain far apart on many of the key issues.

Sticking points include access to fishing waters and whether the Court of Justice of the EU should be allowed to arbitrate legal disputes between the two sides. There is also the tricky matter of how far UK regulations and standards should match those in the EU to ensure what is called a “level playing field” between the two sides.

Another unusual aspect of these talks is that even if they succeed, they will produce an arrangement that will make trade between the two sides harder than it used to be. Normally, a trade negotiation facilitates and increases trade between the negotiating partners. Even if a comprehensive, no-tariff no-quota free trade agreement is reached, in this case the two parties will face significant new barriers to trade on January 1 2021.

Due to this reverse dynamic, where the UK moves away from its highly integrated relationship with the EU, much of the negotiations focus on how to minimise the disruption caused by the UK’s new position as a third country. Clearly, continued trade without tariffs and quotas will help. Yet, for the EU this cannot be offered without guarantees that its businesses are not placed at a disadvantage when the UK gains regulatory autonomy.

The EU does not want the UK to be able to offer more generous state aid to businesses, enabling it to undercut European industry. It also wants the two sides to be aligned on social security and environmental protection. These are areas where the EU has high standards, and it is worried that any lowering of these in the UK will give British companies a competitive advantage. The UK, however, is unwilling to commit.

Unlike in other negotiations, where solutions to impasses are often found in previously concluded agreements, these talks can’t fall back on past precedents. Although the EU has offered nearly tariff and quota-free access to its market to other countries – including Japan, Canada and Singapore – without requiring the same commitments on a level playing field, it will not do the same for the UK. That’s because the overall ambition of these other agreements was to move towards regulatory convergence. The UK, in contrast, is seeking regulatory divergence.

What’s more, the volume of trade between the EU and the UK is such that any undercutting of EU businesses will be felt strongly. The negotiators thus face a challenge in finding a solution to this unique situation of two trading partners moving further away from each other.

They have just a few weeks to find a way through. Otherwise, there will be a no-deal scenario. In line with WTO requirements, tariffs and quotas will then be applied to goods crossing the border. Border checks will need to be carried out by both sides. And the administrative burden for businesses will increase significantly.

A substantial breakthrough is needed when the negotiators meet next week to avoid such a scenario.

Magdalena Frennhoff Larsén does not work for, consult, own shares in or receive funding from any company or organisation that would benefit from this article, and has disclosed no relevant affiliations beyond their academic appointment.