Why low and alcohol free beers could be considered health drinks 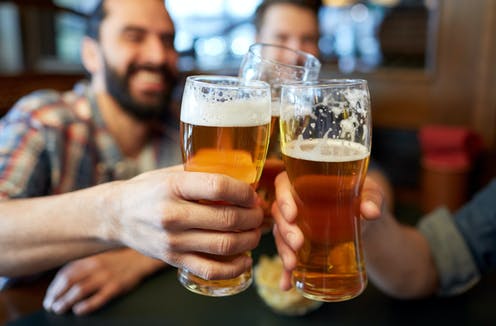 It is often said that weak beer was drunk in preference to dirty water in European towns during the middle ages. This fact is probably overstated, but the idea that beer was nutritionally important in the medieval period seems more likely. Weaker, so-called “small beers” would have been low in alcohol but a valuable source of energy and nutrients, helping medieval labourers meet their high energy requirements of 3,000 calories a day.

The industrialisation of brewing led to higher alcohol levels in modern beers, which together with their energy and carbohydrate content means beer is now associated with poor health and disease. Growing concerns about the health effects of excessive beer consumption has driven increased interest in no-alcohol and low-alcohol (“nolo”) beers, especially in adults under 30. The acceptability of these beers has increased recently, in part due to brewing developments that require less heat and so retain more of the original flavours.

Research shows that moderate beer intake, as with wine, is associated with a reduced risks of heart disease. So it’s plausible that nolo beers could also offer these health and nutritional benefits, but without the negative effects linked to the alcohol and calorie content.

In a recent review, we set out to determine the health benefits of nolo beers and whether they could find a place as nutritious drinks with everyday uses, rather than being drunk typically only by teetotallers and designated drivers. Antioxidants and gut health are areas about which there is considerable interest among the health-conscious and among food producers, and nolo beers can provide for both.

Many people think probiotics are the bacteria in yoghurts and perhaps kombucha, but beer can be probiotic too – that is, it contains live, beneficial bacteria – due to its yeast. A number of yeasts such as Saccharomyces boulardii have been found to play a role in managing gastrointestinal disorders, and although this type of beer is yet to be tested to see if it improves gut health, a number of studies are in the pipeline. A beer using alternative yeasts such as this also could reduce the beer’s sugar content, or through slow fermentation, produce less alcohol.

Other styles of beer such as sour beers and lambics use bacteria similar to those you would find in live yoghurt. But, as with yoghurts, it may not be possible to get an approved health claim, and many products are treated to extend shelf life and in doing so reduce or remove any potential probiotic microorganisms. To contain any live probiotics linked to maintaining a healthy gut and immune system, the beer needs to be fresh, not pasteurised and unfiltered. But this would reduce its shelf-life and risk the production of “off” flavours.

Polyphenols are a large group of compounds found in hops and grains that have been linked to a reduced risk of disease. They have been shown in laboratory tests to be powerful antioxidants, which can mop up dangerous free radicals in the body’s cells, which if left unchecked can increase the risk of diseases, such as heart disease and cancer. While there is doubt about whether this is the mechanism by which antioxidants keep us healthy, what is clear is that diets rich in a variety of these compounds are a good thing.

Beer and nolo beer are rich in polyphenols due to the barley and hops, which means beer can contain over 50 different compounds that could provide benefits from affecting gastrointestinal health to controlling bacteria growth. Beers containing more hops, such as IPAs, tend to contain even more of these potential health-promoting polyphenols than lagers.

There is now recognition that nolo beers can potentially be marketed as health products. German brewer Erdinger’s alcohol-free wheat beer contains electrolytes that can aid the absorption of water to help digestion – something often referred to as “isotonic” when found in a sports drink. The beer is also a source of folate and vitamin B12 due to the action of the yeast in the bottled beer (particularly important for vegans, for whom there are few natural sources of vitamin B12 available).

Erdinger market this beer as “isotonic” and “a sporty thirst quencher”, which suggests it has identified that the beer is both suitable for, and is of interest to, groups beyond those wishing to avoid alcohol. The sports drink potential of nolo beers has been tested in the lab too, with low alcohol beers being almost as good as sports drinks for rehydrating, especially if a pinch of salt is added.

While nolo beers are growing in popularity, it may be that traditional beer fans may struggle to accept them as “real ales”, given the poor reputation of low-alcohol beers in the past. But with improving brewing and alcohol-removal methods, the flavour and potentially the health benefits of low alcohol beers can be retained, while reducing the negatives of excess alcohol and calories. Even the most ardent beer fans may yet be won over.

Ray Carson is a Director of Beertorrent Ltd.

Bishoy Hanna-Khalil and Duane Mellor do not work for, consult, own shares in or receive funding from any company or organization that would benefit from this article, and have disclosed no relevant affiliations beyond their academic appointment.