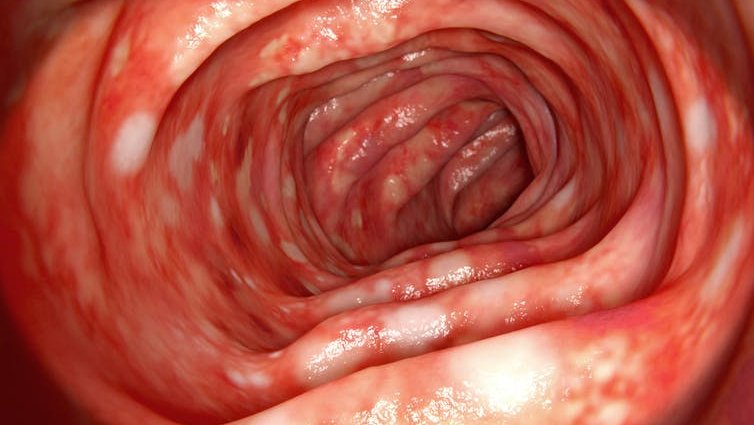 Japan’s prime minister, Shinzo Abe, has announced that he is retiring due to worsening health. The condition 65-year-old Abe suffers from is ulcerative colitis. But what exactly is this disease?

Ulcerative colitis is a long-term condition that causes the lining of the colon and rectum to become inflamed and develop tiny open sores (ulcers). Scientists aren’t sure what causes it, but there are known risk factors. These include recent gut infections, a family history of the disease, and taking anti-inflammatory painkillers such as ibuprofen. People living in western nations and at higher latitudes are also at greater risk.

Most new cases are reported in early adulthood, but some people develop the disease in childhood or in later life. Abe’s condition began when he was in junior high school.

Ulcerative colitis often causes diarrhoea and blood in the stool. This may be associated with abdominal pain and cramps. If a GP suspects that you have the condition, you will be sent to a specialist for endoscopy of the colon with a biopsy to confirm or rule out the disease.

Symptoms tend to come and go. The period between flare-ups (remission) can last for months or even years, but the symptoms will eventually return. A previous flare-up, in 2007, caused Abe to resign as prime minister.

Although there is no cure for the disease, there is a range of drugs that can help to reduce the symptoms or lengthen the period of remission. The goal is to heal the inflamed gut completely as this reduces the chance of disease flare-ups and complications.

The first treatment given is usually a class of drugs known as aminosalicylates or 5-ASAs. These drugs are delivered by mouth or as an enema and work locally in the gut to reduce inflammation, which gives the damaged tissue a chance to heal. They’re usually the first treatment option for mild or moderate ulcerative colitis. Abe started taking 5-ASAs in 2009, according to Reuters.

People with the condition may also be prescribed corticosteroids as an initial treatment to reduce inflammation and treat symptoms. Because these drugs are absorbed into the blood they are associated with side-effects, which include causing osteoporosis and cataracts. For this reason, they are not used as a long-term treatment. They tend to be used with or instead of 5-ASAs if 5-ASAs alone aren’t effective.

Other drugs that are used to treat the disease include immunosuppressants, such as tacrolimus and tofacitinib, which are used to induce and maintain disease remission, and azathioprine, which is a long-term treatment to maintain remission. Biologic drugs, which target specific inflammatory pathways, are also given as injections or infusions. They include infliximab, adalimumab and vedolizumab.

However, because ulcerative colitis is unpredictable – with the length of remission varying – it is important for doctors to monitor the disease carefully to know whether the treatment is working and switch strategy if it is not.

For about one in four people with ulcerative colitis, the drugs don’t successfully treat the disease or they cause complications. For these people, surgery may need to be considered. The operation involves removing the colon, leaving a stoma. Many people then have their gut joined back to the bottom muscles with the formation of a pouch.

People with ulcerative colitis have an increased risk of colon cancer and are advised to have a regular colonoscopy, starting eight to ten years after receiving a diagnosis. Mr Abe has a comprehensive check-up twice a year.

2020-08-31
Previous Post: Back to school: how to support children as they head into a new class
Next Post: Concerned citizens petition Timor-Leste authorities to drop planned revival of defamation law · Global Voices