Police legitimacy: how it can be regained once lost 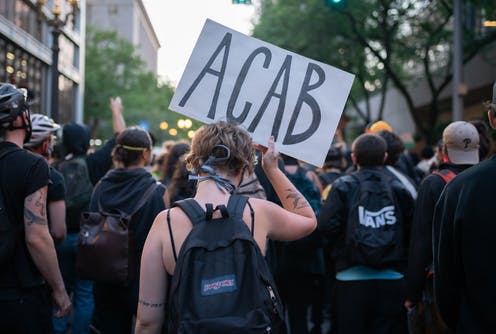 There is a well-known phrase that describes a certain view of police officers. Often abbreviated in graffiti and on placards to “ACAB”, the words “all cops are bastards” have been widely adopted as a response to the way police forces operate.

Whatever you think of the sentiment behind it, the phrase highlights an important aspect of the policing model used across the world – the idea of police legitimacy.

This legitimacy – a sense that the public and the police are “on the same side” underpins support and faith in policing, and cannot be taken for granted. It is a key concept and a foundation stone for modern democratic policing that goes back almost 200 years.

Although police development has varied according to the social and political journey of individual countries, a model for many can be found in a piece of English legislation from the 19th century. It established the first modern police force in London and was based on principles, named after the politician Robert Peel, the “father” of British policing.

Peel’s principles provide an insight into what makes the police legitimate in the eyes of the public. Essentially, it comes down to a combination of public consent and a legal system, which means the police are ultimately answerable in court for their actions.

Legitimacy also implies that the police are granted the power to use force. Again, legitimate use of force requires it to be closely examined to make sure it is necessary, legal and appropriate.

The response to the killing of George Floyd, and the many Black Lives Matter demonstrations, are a reminder of just how fragile the legitimacy enjoyed by some police agencies is. Abuse of power, corruption, and a lack of transparency and accountability are all factors that contribute to its erosion.

But that erosion need not necessarily lead to a complete collapse of legitimacy. In 2015, for example, the police in New Zealand realised they needed to become more open and honest to improve their relationship with the public. This was driven by the experiences of the newly appointed police chief, Mike Bush, and partly involved greater focus on crime prevention rather than pure law enforcement, and more time working with various local communities.

The change resulted not only in a perceived increase in police legitimacy, but was also considered at least partially responsible for a subsequent reduction in crime.

This refocus, involving a change in attitude of a police culture that often favours action and excitement over more “mundane” work, is a difficult one, but it can be achieved.

Getting the messages right meant trial and error, and our messages evolved over time. At the start, people thought we meant enforcement and investigations were now less important than prevention work. We had to change tack, to make them understand that we know all the components of policing are important.

He added: “It is just the order in which you think and act that makes the difference, putting prevention at the front and victims at the centre.”

A similar kind of turnaround in the US is one that will require much consideration and effort. Just a couple of statistics illustrate the challenge, like the fact that 28% of people killed by the police in since 2013 are described as “ethnically black” even though only 13% of the population
fit into that category. Or that 99% of killings by police from 2013 to 2019 have not resulted in officers being charged with such a crime.

Also, until recently in the US, there have been no nationally published statistics relating to excessive use of force used by police officers. Even a recent decision to start doing so has led to only a minority of police forces agreeing to share their data.

It may be no surprise then that there is a disconnect between the American public and the police who serve them.

Legitimacy entails a willingness on the part of the public to obey and cooperate with the police. But reliance on “order maintenance” policies, including the widespread use of stop and search, and excessive use of violence (so easily captured on social media) considerably reduces that level of cooperation.

Accountability for police activity is also vital, and, as my own research has shown, has been a problem for policing activities undertaken by private companies in some countries.

But fairness and transparency, and a willingness to work with – rather than against – communities will go a long way in restoring legitimacy across all sections of the population.

And while acknowledging that policing is sometimes a dangerous occupation, and police officers risk their lives to protect citizens, there needs to be a realisation of how important legitimacy is to modern policing. That rather like beauty, it remains in the eye of the beholder.

Colin Rogers does not work for, consult, own shares in or receive funding from any company or organisation that would benefit from this article, and has disclosed no relevant affiliations beyond their academic appointment.