How political attack adverts can backfire 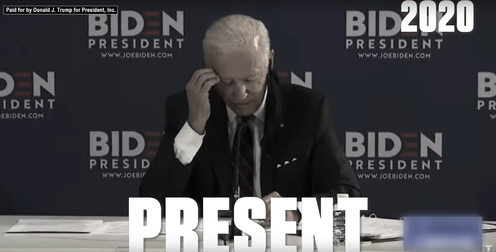 A wave of political adverts is beginning to flood the American media as the November presidential election approaches. A major theme will be attack adverts in which one candidate will highlight the shortcomings of their opponent. Recent attack ads by President Donald Trump have focused on the mental fitness of his Democratic challenger for the White House, Joe Biden.

Such attack adverts, while firmly established as part of the US political landscape, have been increasing in volume in recent years. But our research suggests that they can backfire. We found that unsubstantiated negative attacks can arouse curiosity among viewers, in some cases leading them to draw the opposite conclusion to what the advertiser intended.

The first part of our recent study examined the effects of adverts run by Republican candidates during the 2014 midterm elections, which attacked President Barack Obama’s flagship healthcare policy.

Opposing the Affordable Care Act (ACA), commonly known as Obamacare, was a major political stance of the Republican Party in the 2014 midterm elections. Almost all Republican candidates made an effort to garner support from their base by attacking Obamacare and promising to repeal it if elected.

In the first part of our study, we analysed every political advert run through the 2014 midterms by all candidates for the US House of Representatives and Senate. Overall, anti-ACA adverts were aired five times more than the pro-ACA adverts. The negative adverts constituted a major part of the Republican campaigns: 36% of all the adverts aired by Republicans attacked the healthcare act. Meanwhile, Democrats distanced themselves from the issue and only 7.5% of all adverts they aired were about ACA.

The ACA attack adverts were more rhetorical than substantive, neither mentioning the details of the act nor providing any relatable reasons for their attack on the law. A notable example was the “creepy Uncle Sam” attack adverts in which ACA was portrayed as a negative development without providing much evidence. The producers of the adverts we studied appeared to assume that the public already agreed ACA was inherently bad, and so felt no need to present viewers with more arguments against it.

In the second part of our study, we ran an experiment in which 50 random people from across the political spectrum were exposed to negative attack adverts about ACA, 50 to positive adverts about ACA, and another 50 were not shown any adverts. When we subsequently presented the three groups with information about four policy issues, including ACA, we found those who had seen the negative attack adverts about the healthcare act were more likely to seek further information about it than the other two groups. While we found that positive adverts also increased curiosity in comparison to no adverts, their effect was less than that of negative adverts.

Since the only difference between the three groups was the type of advertisement they were exposed to, we attributed the difference in their level of curiosity to the type of advertisement they watched. We confirmed that viewers’ curiosity was triggered by exposure to negative information in attack adverts, which don’t provide clear reasons behind the attack.

The underlying theory behind this is the US psychologist George Lowenstein’s “information gap theory”, which suggests that when there is a discrepancy between what we know and what we want to know, we seek out more information to fill that gap. Republican candidates attacked ACA in their political advertisements without providing adequate information on why they oppose the act. Such advertisements, bereft of information relevant to voters, actually sparked a curiosity to learn more.

It’s not just adverts about ACA that backfire. We also tested these results with a different group of 150 people who were shown attack adverts against the Common Core educational standards. Common Core is a set of standards detailing the level students throughout the US should reach in English and mathematics at each school grade.

In one attack advert, implementation of Common Core education standards was described as a “disaster”. We found a very similar pattern, consistent with the ACA attack adverts, arousing more curiosity from viewers which led them to want to gather more knowledge about Common Core.

Our experiment also suggested that an increase in anti-ACA adverts could actually lead to an increase in enrolments in the healthcare scheme. In our data, the average number of anti-ACA adverts in a state ahead of the 2014 midterms was 5,877 and 22.3% of eligible people signed up to ACA during the enrolment period between November 2014 and February 2015. Our statistical analysis indicates that if the number of anti-ACA adverts in an average state was to increase by 1,000 to 6,877, then the enrollment in ACA in a state could increase by 4% to 26.3% in the next enrolment period.

The coronavirus pandemic adds a new layer of complexity to political campaigns in 2020. With election rallies, town hall meetings and public debates out of bounds for most politicians, there’s likely to be an unprecedented amount of political advertising and outreach efforts on social media and television. Now, more than ever, it’s important for candidates to develop online strategies to reach and connect with the electorate with effective political advertisements.

2020-08-27
Previous Post: Misinformation: tech companies are removing ‘harmful’ coronavirus content – but who decides what that means?
Next Post: Disinformation about Belarus spreads in the Balkans via online portals and social media · Global Voices