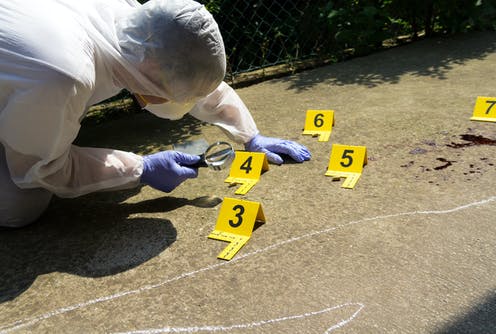 Every time you put on a coat, hug somebody or sit on a sofa you leave behind tiny little fibres from your clothing. You also pick up fibres left behind by other people. This movement of fibres is known as fibre transfer and forensic scientists can use this to solve crimes.

Textile fibres are one of the most important types of evidence in forensic science. And have been pivotal in solving some of the UK’s most notorious crimes – such as the murders of Joanna Yeates, the Ipswich serial killings, the Soham murders and the Coastal Path murders, to name a few.

But establishing textile fibre links is only half the battle for forensic scientists working on criminal cases. What is equally, if not more, important, is to work out how the fibres actually got there in the first place.

To date, it’s largely been assumed that fibre transfer only occurs when two surfaces touch. So, for example, when the front of your jumper touches the shirt of someone you hug, or when the back of your trousers touches the sofa you sit on. But we now know this is not necessarily the case.

Our new research has found a new way that fibres can be transferred: “contactless airborne transfer”. This is when fibres move from one garment to another without contact. So, for example, imagine there are two people in the same room, but they don’t touch each other. It’s possible that fibres from person A’s clothing could transfer through the air, to person B’s clothing (and vice versa).

From the perspective of an investigation, this means that, under certain conditions, fibres found on a person could have been passively transferred rather than through direct involvement in a crime.

In our experiment we used everyday garments – jumpers, long sleeved tops and fleeces – that were fluorescently dyed. This allowed us to track the airborne transfer of their fibres between garments.

One participant wearing a fluorescent garment stood in one corner of an elevator and another wearing a non-fluorescent black top stood in the diagonally opposite corner. Both participants remained in the elevator (without touching each other) for 10 minutes. During this time the elevator operated as normal and non-participants of the study entered and exited as usual.

Following the experiment, the black top of the recipient was photographed using UV-imagery techniques to determine the number of fibres transferred. The results of the study proved that not only can textile fibres actually transfer between garments without physical contact, but they can do so in relatively high numbers.

Often in a criminal case the finding of just a few fibres can be considered significant. So the fact that up to 66 fibres were transferred in a single experiment, was considerably higher than anticipated.

That said, not all garments we tested transferred fibres to the same extent. We found the type of fibres the donor garment was constructed from and its ability to shed those fibres was key in contactless fibre transfer. The type of clothing worn by the recipient also impacted transfer, as did the movement of people and the opening or closing of the elevator doors.

When forensic evidence is presented in court, a forensic scientist is responsible for evaluating the significance of that evidence. And our new findings may be particularly relevant for those specific cases where a small number of fibres are found and the circumstances are right for contactless fibre transfer to take place.

And in this way, the results of our study can be used as a baseline in the evaluation of fibres found as part of a case – and will also help to increase the robustness and validity of forensic evidence being presented in court.

2020-08-14
Previous Post: Hong Kong’s press freedom is on life support thanks to the new security law
Next Post: The pandemic is an opportunity to change our health behaviour for good