Coronavirus: does the common cold protect you from COVID? 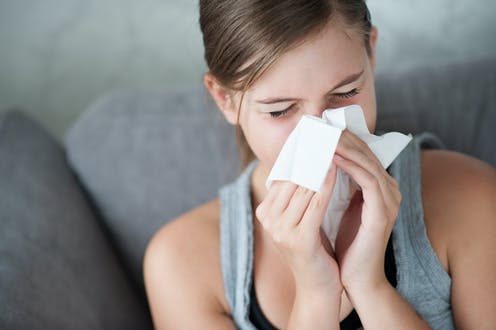 An article in Science recently generated a lot of interest by providing a possible explanation of why COVID-19 can be deadly to some yet go virtually unnoticed in others.

Scientists at La Jolla Institute for Immunology in California showed that infection with common cold coronaviruses can generate an immune response that resembles key pieces of the immune response generated by SARS-CoV-2 – the virus that causes COVID-19. This raises the possibility that previous infection with one of the milder coronaviruses could make COVID-19 less severe. But how likely is this? And how does this relate to what we already know about coronaviruses?

A few weeks ago, a different article sat at the centre of the SARS-CoV-2 immunity debate. This one showed that the antibody response to SARS-CoV-2 may decline over time.

The findings raised concern that SARS-CoV-2 could infect a person many times and that a vaccine might not generate lasting protection. But the article focused on just one arm of the immune response, the B cells, which produce antibodies that help to clear an infection.

T cells are also key to the immune response against viruses. They play a variety of roles, among them helping B cells to mature into disease-fighting machines. The article by Jose Mateus and colleagues at La Jolla Institute for Immunology is important because it shows that people keep T cells from the milder coronaviruses long enough to potentially interact with a new challenge by SARS-CoV-2 and that those T cells might even recognise SARS-CoV-2 and help to clear the infection.

The case for cross-immunity

For epidemiologists, the evidence of waning immunity and cross-immunity didn’t come as a surprise. A study from 1990 showed that soldiers infected with one of the milder coronaviruses didn’t retain immunity for much longer than a year. Also, the boom-bust cycle that the milder coronaviruses undergo from year to year can be explained by a mix of waning immunity and cross-immunity.

We’re still just not sure

Evidence for cross-protection between all but the most closely related coronaviruses is scant.

It is difficult to say whether the milder coronaviruses protect against SARS-CoV-2 partly because we have done so little surveillance on them. Ideally, we would be able to look at historical data to identify which communities experienced major outbreaks of each milder coronavirus strain over the past few years and then see if there is a link with less severe COVID-19 cases.

Challenge studies, in which a person is intentionally infected with a milder coronavirus strain and then exposed to SARS-CoV-2, could also address the question but are dangerous and ethically fraught. For now, all we can say is that the possibility that the common coronaviruses might protect against SARS-CoV-2 remains just that – a possibility. Indeed, Mateus and colleagues describe this theory as “highly speculative”.

Stephen Kissler does not work for, consult, own shares in or receive funding from any company or organisation that would benefit from this article, and has disclosed no relevant affiliations beyond their academic appointment.

2020-08-12
Previous Post: What the coronavirus pandemic looks like for Colombia’s former FARC fighters
Next Post: Zoom meetings help marginalised staff feel included – we should keep having them even after offices reopen