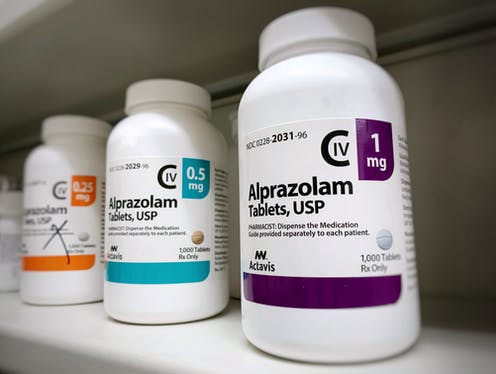 Counterfeit, or “fake”, medicines are a growing problem worldwide, from antimicrobials to cancer treatments. They are are designed to look exactly like the real thing, but typically contain the wrong type or amount of active ingredient, which may cause serious harm, illness or premature death.

In the UK, there’s been a concerning rise in the use of counterfeit benzodiazepines, among young people and those are already dependent on drugs. Public Health England has even issued a rare warning about drugs sold as benzodiazepines, including diazepam, temazepam, and alprazolam (better known as Xanax).

Benzodiazapines are prescribed around the world for anxiety, depression and even epilepsy. However, Xanax can only be obtained illicitly in the UK as doctors are unable to prescribe it. Drugs like these are also used by young people recreationally.

Fake benzodiazapines can produce a similar effect to the real thing. However, incorrect dosages may cause drowsiness, which could potentially lead to unconsciousness. Many people may also see these drugs as being low risk, or may rely on their friends – rather than medical opinion – on how many pills they should take. Unfortunately many fake benzodiazepines aren’t safe – and the strength of the dosage often isn’t known until it’s too late.

Toxicological and chemical analysis has shown that some of these counterfeit medicines contain dangerously high doses of benzodiazapines, or even novel substances such as flubromazolam, flualprazolam and etizolam. These chemicals are related to benzodiazapines in that they cause a similar effect but can present a greater risk of toxicity due to their side-effect profile.

The main risks from taking these drugs is overdose, either because the user doesn’t realise how strong they are or they combine them with alcohol. Like benzodiazapines, alcohol is a respiratory depressant. Using them together increases the chances of breathing difficulties or even death.

Deaths following exposure to these drugs have been rising in recent years among all age groups. In Scotland, novel substances were responsible for 85% of the 792 deaths from benzodiazepines in 2018. Analysis has also shown that drugs bought as diazepam, and packaged to look like legitimate medicines, contained completely unrelated substances. One sample even contained the anaesthetic drug ketamine.

Benzodiazapines used to simply be stolen from pharmacies and pharmaceutical manufacturers and sold on the streets or purchased from bogus online pharmacies. But there’s now a sophisticated international market in these illicitly synthesised alternatives, many of which can easily be purchased in bulk from the internet, and distributed via local drug markets.

People also obtain these types of drugs from social media apps or the dark web. People may believe they’re buying a licensed medicine online, while unwittingly consuming a significantly higher dose or a harmful substitute. There’s no quality control in illicit drug manufacturing.

It’s currently unknown how many people have required hospitalisation or died as a result of these fake medicines. However Public Health England doesn’t typically issue drug alerts unless cases have been rising, or particularly harmful substances have been detected.

Many people may find these drugs appealing as they’re easy to access and cheap. Typically, tablets won’t cost more than a couple of pounds and are easy to access online. People may also believe these fake medicines are safer than other types of illicit drugs, as they may think they’ve been through quality control. And given that taking medicine is so normalised in our society, this can create a perception of low risk and even benefit.

Perhaps of more concern is that these fake medicines appeal to those who experience mental health problems like anxiety. Despite efforts to reduce the stigma of mental illness, some people will be too ashamed or anxious to seek help, and may self-medicate using these illicit medicines.

These drugs are also more readily accessible than the professional support that these people need. There are no long waiting times or invasive assessments with professionals that need to be navigated before treatment is even offered. Users know they can source a temporary quick-fix solution to the way they feel in a matter of hours – while they may wait eight weeks on average for a specialist appointment in the UK, if they’re referred at all.

Despite promises by the NHS to prioritise mental health treatment and reduce waiting times, access to these services is still challenging. Rates of mental illness have been rising, but it’s still no easier to get treatment. It’s unsurprising that some young people are trying to find their own solutions.

The rise of illicit or fake benzodiazepines shows this is a growing problem in the UK. Without important changes to the UK’s mental health services, many people could continue to be harmed by fake medicines.

If you need someone to talk to or need specialist support for substance use, please visit Young Minds, Talk to Frank, or Crew 2000.

Harry Sumnall receives and has received funding from public grant awarding bodies for alcohol and other drugs research.

2020-08-10
Previous Post: A scientist’s plea on coronavirus: now is not the time to relax
Next Post: The Fight Over Raw Butter