Knife crime: why young people need to get a say in their rehabilitation 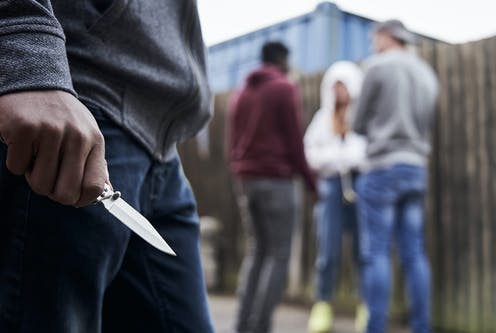 Knife crime hit a record high in England and Wales before the COVID-19 lockdown came into place – with police reporting 46,265 cases for the year to March. The recent report by the Office for National Statistics (ONS) said this was 51% higher compared to when the data was first collected in 2011.

During lockdown, knife and gun crime dropped considerably, but these figures have now begun to increase with restrictions easing.

Tougher sentences are often touted as the answer to knife crime. There also seems to be the belief that people who carry out such crimes have forfeited their right to political and public empathy.

The idea that young people should get a say in their punishment then, might also seem far fetched to some. But every young person has a right to be meaningfully involved in their own rehabilitation.
And giving them a say on how the process works and how it’s carried out is crucial. Not least because it can help to reduce the likelihood they will carry or use a knife as a weapon.

As it stands, youth offending teams work with young people involved in, or on the cusp of, knife-related crime, often ordered by the courts. These teams do in-depth assessments to flag up what’s triggering young people’s involvement in knife crime. And they’ll also look at issues like the impact of childhood trauma on thinking and behaviour.

These teams aim to work in a collaborative way with young people to help them change their behaviour. In theory, this would see young people taking on responsibility for their learning and making decisions on what topics to cover, or acting as spokesperson for the group in feedback forums with their youth offending teams. But in reality, many young people don’t really engage or involve themselves with the process of rehabilitation. They just see is as “something to get through” – as recent research shows.

The study, which involved 15 months of fieldwork between 2016-2017 with a youth offending team in England, looked at the extent of young people’s participation in the rehabilitation process.

It found that some of the young people simply aimed to attend meetings, putting as little as possible into the process. They were seemingly compliant and responsive to demands with little resistance but were actually just going through the motions.

One support worker described how some young people seemed insincere – giving a false impression they were content with their specified objectives set by the youth offending team – requiring them to complete worksheets or anger management courses.

Another support worker in the study, Mason, queried whether staff should be digging beneath the surface – especially with young people who appear quietly compliant.

He explained how he felt concerned the “game playing element” of the system discouraged young people from properly engaging in supervision meetings:

Do you see that strategising – is that what we count as good? Or are the ones who chafe against this…is that actually more meaningful? [Is] their participation, more meaningful?

Jackson, one of the youth offending team managers, explained how a lot of young people just want to complete what’s required of them without any complications:

They see it as a punishment. They see us as part of the…well, and we are, the officers of the court. And a voice of authority. And they wanna get through it for six months, for nine months, for twelve months. They don’t think of participation in a way that, you know…that a practitioner might.

Indeed, across the study, young people under youth justice supervision generally didn’t want to question those in authority because of fears this could lead to a delay in completing their court order.

The study also revealed that many young people felt decisions about their rehabilitation were largely outside their control – as Tommy explains:

Ultimately, young people’s voices must not be ignored in this process – they have a right to a say about their rehabilitation. But young people need more reassurances to know they are entitled to express their views and that their perspectives will be taken seriously – and not used against them.

Many of the staff in the youth offending team recognised that empathy and trust plays a pivotal role in bolstering young people’s participation. And research showing the transformative power of mutually respectful relationships backs this up.

To stop young people feeling disaffected then, they need to be consistently more involved in the decision making process surrounding their rehabilitation.

This will not only help to pave the way for greater levels of engagement, but it will also help to maximise young people’s potential for success – and hopefully reduce the likelihood of them picking up a weapon in the future.

Sean Creaney is a member of the Advisory Board at social justice charity Peer Power Youth and a voluntary Board Director at Voice for Children.

2020-08-06
Previous Post: Daily exercise rules got people moving during lockdown – here’s what the government needs to do next
Next Post: ‘Shadow Means Strength, Shadow is Invincible’: A conversation with Turkish artist Selma Gurbuz · Global Voices