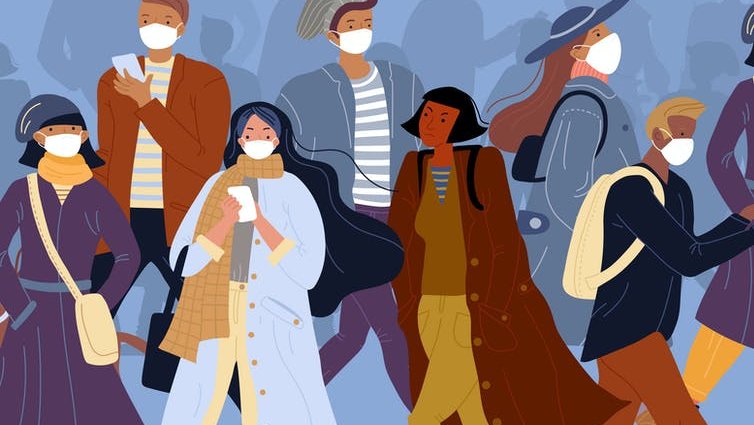 Several hundred people assembled in London’s Hyde Park in July 2020 to protest rules making face masks mandatory in shops and supermarkets to help control the spread of COVID-19. This was not an isolated event. Similar protests have occurred in many places around the world in reaction to the prospect of “mask mandates” – especially in the United States.

These protesters are not without allies. “Anti-maskers” have elicited support from prominent figures on the political right in the UK and America: Peter Hitchens of the Daily Mail has called them “muzzles”; Michael Savage, a prominent talk radio host, called masks a “mark of submission”; to say nothing of President Donald Trump’s refusal to wear a face mask in public and his dismissal of them as “politically correct” (until his abysmal approval ratings compelled him to awkwardly soften his position).

Why do mask mandates elicit such anger?

Setting aside the conspiracy theories and disinformation that seem to prevade these protests, the participants are joined by a fierce attachment to individual liberty. They believe mask mandates sacrifice individual liberty to a collectivist notion a “greater good”.

It is easy to understand why: mask mandates use the coercive power of the state to require a person to do something that they would otherwise not choose to do. And it seems to follow that a person’s liberty is compromised by such interference.

The conception of “freedom as non-interference” that underpins the anti-mask movement has the virtue of simplicity. It allows us to apply an easy metric to test our freedom: if our choices are interfered with, then we are less free.

But if this is correct it is unclear why wearing a mask is so troubling given the widespread “interference” in our other choices. Surely, the requirement that you have to cover any part of your body is a far graver violation of individual liberty than being compelled to wear a small face covering during a pandemic? It may be that the anti-mask movement is the spear tip of a global militant nudism trend, but that doesn’t seem particularly plausible (or desirable).

The problem is that the idea of liberty as non-interference often runs up against common sense. For example, most people do not feel savagely oppressed by having to drive on one side of the road, by bans on public nudity or by laws against murder. They interfere with our choices, but they don’t seem to make us less free. Maybe we need a different formulation of freedom.

As the philosopher Philip Pettit notes, this makes liberty a more complex idea, but one better suited to our social reality. It is more vulnerable because it only requires the potential for interference to be compromised, but it also makes it more robust because if the interference is not arbitrary then it is not a violation of liberty even if our actions are constrained.

This can be illustrated by contrasting the slave with the citizen. All the choices of a slave are predicated on their master’s permission. This is the case even if they have a kind or lazy owner who never actually interferes in their choices. The possibility of being “sold down the river” remains and being under such power is irreconcilable with freedom.

In contrast a citizen may be subject to significant interference from the state, but it does not diminish their liberty if the laws are not arbitrary. This is true if several conditions exist: the laws need to be publicly known so that you can ensure compliance; they need to be impartially enforced so that no one is above the law; they need to be contestable in courts of law and the public square; and they need to be subjected to invigilation by those they affect, usually through democratic accountability.

A slave has to live in a state of perpetual uncertainty, a citizen knows where they stand.

This account of freedom depends on the procedural mechanisms which prevent the power of the state being chained to the private will of a single person or group. If “mask mandates” meet these procedural requirements, then they cannot be said to violate the personal liberty of individuals even if they restrict what they can and cannot do.

Let’s test whether mask mandates meet these requirements. The rules are publicly known and they seem to be being impartially enforced, though there is an open question about whether COVID-19 restrictions have been applied unfairly to people of colour.

If these mandates violate a citizen’s rights, then they are free to bring a legal challenge and we know they can protest against them (so long as the protests comply with regulations). Finally, these rules are the product of democratically elected governments subject to judicial oversight and political opposition. They therefore cannot be called arbitrary.

The anti-maskers are right that the state ought to be resisted when it tries to dominate its citizens and violate their basic rights, but instead of worrying about masks, they ought to be more concerned with instances of unidentifiable government agents firing tear gas into peaceful demonstrators or detaining people for an indeterminate amount of time under the nebulous mandate of protecting monuments or national security. These are the things that turn citizens into slaves.

Gwilym David Blunt does not work for, consult, own shares in or receive funding from any company or organization that would benefit from this article, and has disclosed no relevant affiliations beyond their academic appointment.