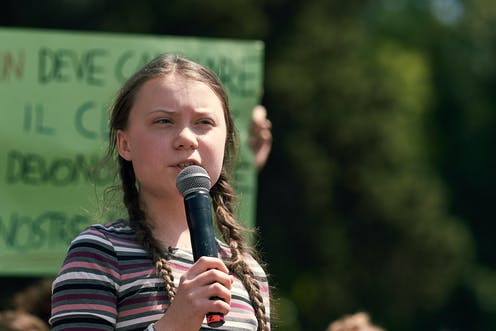 Climate change and COVID-19 are the two most significant crises faced by the modern world – and widespread behaviour change is essential to cope with both. This means that official messaging by government and other authorities is critical. To succeed, leaders need to communicate the severe threat effectively and elicit high levels of public compliance, without causing undue panic.

But the extent to which people comply depends on their psychological filters when receiving the messages – as the coronavirus pandemic has shown.

With COVID-19, the early messaging attempted to circumscribe the nature of the threat. In March, the WHO announced that: “COVID-19 impacts the elderly and those with pre-existing health conditions most severely.” Similar statements were made by the UK government.

A reasonable interpretation of this would be that the virus does not “affect” young people. But as new clinical data came in, this message was changed to emphasise that the virus could affect people of all ages and doesn’t discriminate.

But human beings are not necessarily entirely rational in terms of processing information. Experimental psychology has uncovered many situations where our reasoning is, in fact, limited or biased.

For example, a mental process called the “affect heuristic” allows us to make decisions and solve problems quickly and (often) efficiently, but based on our feelings rather than logic. The bias has been shown to influence both judgements of risk and behaviour. For COVID-19, the official messaging would have established a less negative reaction in young people compared to older people. This would have made them more likely to take more risks – even when new authoritative data about the actual risks came in. Researchers call this “psychophysical numbing”.

Another mental obstacle is confirmation bias. This makes us blind to data that disagrees with our beliefs, making us overly attentive to messages that agree with them. It influences (among other things) automatic visual attention to certain aspects of messages. In other words, if you are young, you may, without any conscious awareness, pay little visual attention to the news that the virus is serious for people of all ages.

The initial positive message for young people also created an “optimism bias”. This bias is very powerful – we know of various brain mechanisms that can ensure that a positive mood persists. One study found that people tend to have a reduced level of neural coding of more negative than anticipated information (in comparison with more positive than anticipated information) in a critical region of the prefrontal cortex, which is involved in decision making. This means that we tend to miss the incoming bad news and, even if we don’t, we hardly process it.

All of these biases affect our behaviour, and there is clear evidence that young people were more likely to fail to comply with the government’s directives about COVID-19. A survey conducted on March 30 by polling firm Ipsos MORI found that nearly twice as many 16-24 year-olds had low or limited concern about COVID-19 compared with adults who were 55 or older. The younger group was also four times as likely as older adults to ignore government advice.

Our own research has shown that significant cognitive biases also operate with messaging about climate change. One is confirmation bias – those who don’t believe that climate change is a real threat simply don’t take in messages saying that it is.

What’s more, unlike coronavirus messages, most climate change messages inadvertently accentuate what we call “temporal” and “spatial” biases. The UK government campaign “Act on CO2” used images of adults reading bedtime stories to children, which implied that that the real threat of climate change will present itself in the future – a temporal bias.

Other campaigns have used the perennial polar bear in the associated images, which strengthens spatial bias – polar bears are in a different geographical location (to most of us). These messages therefore allow for a high degree of optimism bias – with people thinking that climate change won’t affect them and their own lives.

Research using eye-tracking to analyse how they process climate change messages demonstrates the effects of such biases. For example, optimistic people tend to fix their gaze on the more “positive” aspects of climate change messages (especially any mentions of disputes about the underlying science – there is less to worry about if the science isn’t definitive).

These gaze fixations can also affect what you remember from such messages and how vulnerable they make you feel. If you don’t think that climate change will affect you personally, the affect heuristic will not be guiding you directly to appropriate remedial action.

To make climate change messages more effective, we need to target these cognitive biases. To prevent temporal and spatial biases, for example, we need a clear message as to why climate change is bad for individuals in their own lives in the here and now (establishing an appropriate affect heuristic).

And to prevent optimism bias, we also need to avoid presenting “both sides of the argument” in the messaging – the science tells us that there’s only one side. There also needs to be a clear argument as to why recommended, sustainable behaviours will work (establishing a different sort of confirmation bias).

We also need everyone to get the message, not just some groups – that’s an important lesson from COVID-19. There can be no (apparent) exceptions when it comes to climate change.

Geoff Beattie has received funding from the British Academy and Edge Hill University for research on psychological aspects of climate change.

Laura McGuire has received funding from Edge Hill University (with Beattie) for research on the development of attitudes to climate change in children.