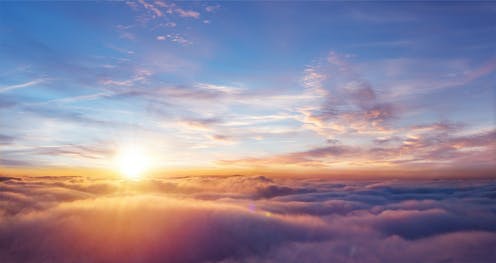 Microbes are the truly dominant group of lifeforms. These invisible pieces of biogenic matter have been running Earth’s affairs for billions of years. Plants and animals popped up as the by-products of microbial mergers relatively recently in our planet’s history.

Understanding microbes is not easy. It took us some time to learn about the existence of the human microbiome, the collection of viruses, bacteria and fungi inside and outside our bodies that connects us to the rest of the microbial cloud that exists everywhere life can survive.

We are now learning that there is even a microbiome high in the sky. These are microbes that are swept into and then reside in the lower parts of the atmosphere. This includes the mid and upper troposphere at altitudes of between 8km and 12km above the ground, and the lower stratosphere at altitudes of up to 15km. What’s more, by joining the planetary wind systems, these lifeforms create microbial highways in the sky that transport them across the world.

Scientists first reported the existence of sky-bound bacteria in a couple of pioneering studies published in 2013 and 2018. These were not isolated microorganisms found by chance. Instead, bacterial communities straddle the sky in large numbers, in the region of hundreds of thousands of bacteria for each cubic metre of air in the troposphere.

Between 60% and 100% of the bacteria in collected samples were alive and they typically lived in the sky for longer than five days. Analysing their genetic material confirmed the presence of dozens of different bacterial species. However, the tropospheric bacterial communities were less complex than some of Earth’s terrestrial habitats.

But bacteria are not the only tiny lifeforms in the sky. We now know this microbiome includes viruses and even fungi. The lower atmosphere appears to be alive and teeming with microbes.

These microbes are well adjusted to their new environment. Only bacteria that already have mechanisms for coping with UV radiation, lack of water and high levels of dangerous oxidants such as ozone survive the journey into the sky, where they feed on the carbon compounds available in the atmosphere. Given this harsh environment, researching bacterial behaviour in the sky may be useful for understanding microbial survival in space.

Bacteria also actively grow in clouds and play an important role in the processes behind the Earth’s atmospheric chemistry. For example, some airborne bacteria encourage water in the air to freeze. This may occur in a similar way to how some plant bacteria use specialist proteins to enable ice to form on and damage leaves, opening a way for the bacteria to infect them. The airborne bacteria and the ice particles that some of them can carry can even become the nuclei needed to form clouds.

Understanding the atmospheric microbiome and its highways in the sky could also help us learn how disease-causing microbes are transported around the planet. In a recent study, scientists found viruses falling from the sky in large numbers, like invisible snowflakes covering the Sierra Nevada mountains in Spain where viral detectors were placed. Thanks to the microbial highways in the sky, genetically identical viruses may be found at different and distant locations across the planet.

This kind of route might be responsible for the spread of the mysterious Kawasaki disease, which can cause heart problems in children but whose exact cause is unknown. A group of Japanese scientists has produced evidence that it may be due to a fungal toxin carried through the sky over long distances from China to Japan. Analysis of air samples over Japan during the time of year when Kawasaki disease is most common found that the most dominant microbial species was the fungus Candida. Laboratory experiments have shown this fungus can produce a Kawasaki-like condition in mice.

Now the whole world is watching the saga of the COVID-19 pandemic. We know the virus spreads through human contact, but a group of doctors has recently warned the World Health Organization that the viral particle may be travelling through the air. Some scientists have even speculated that the COVID-19 virus may have been carried between countries at similar latitudes by a jet stream through the atmosphere.

As we’ve only just begun to understand the role of microbes down here on Earth, it seems likely there is a huge amount more to discover about those that live above our heads.