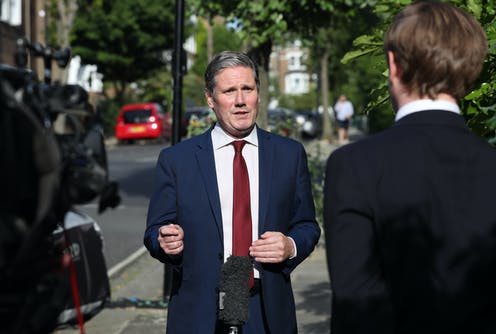 Left-wing alternative media sites such as The Canary, The Skwawkbox, and Novara Media have spent several years providing intense support for the Labour leadership under Jeremy Corbyn. But our analysis shows how they starkly changed their position now that Keir Starmer has taken over as leader of the party.

Back in January Rebecca Long-Bailey was seen as the Corbynite candidate for the leadership. As the Labour leadership election got underway, left-wing alternative media sites positioned themselves in opposition to Starmer and in support of Long-Bailey.

Following his election as Labour leader in April, there was a significant increase in criticism of Starmer on two key sites – The Skwawkbox and The Canary. Throughout April, The Canary produced ten articles that were critical of the Labour Leader while in May there were 16 negative articles published by The Skwawkbox.

The trend for criticising Starmer was crystallised when he suddenly sacked Long-Bailey on June 25. Starmer’s decision sparked outrage on left-wing sites. Many took to defending Long-Bailey against accusations of antisemitism and accused Starmer of a politically motivated purging of the left-wing elements within his party.

Elsewhere, on his popular Another Angry Voice Facebook page, blogger Thomas G. Clarke wrote a widely shared post in which he repeatedly referred to Starmer as a liar, as inept, and as trampling “all over his promise to maintain party unity”.

This opposition is a striking, if unsurprising reversal of a dynamic that characterised Corbyn’s labour leadership. Not so long ago, for example, the leader of the Labour Party was being interviewed by Novara Media’s Ash Sarkar. Now, the outlet’s flagship programme #TyksySour is featuring episodes titled “Starmergeddon?”, in which the prospects of Starmer wiping out the Labour left were discussed at length.

The alt-media site Red Roar is an interesting outlier. In the left-wing alt-media ecosystem, it positioned itself in opposition to Long-Bailey. Despite being known as an anti-Corbyn outlet, Red Roar’s most viral election content was actually its attacks on Boris Johnson.

The key question is whether this is making any difference to Starmer’s leadership. This can be gauged, at least in part, by looking at the reach of the content that criticises him.

Among the most widely shared content is the Another Angry Voice Facebook post mentioned above. At the time of writing, this had gathered over 5,600 reactions, 2,300 comments, and 1,900 shares. In comparison, The Canary article calling Starmer a charlatan had just over 700 Facebook interactions and a further video feature by its Editor, Kerry-anne Mendoza, titled “Keir Starmer unmasked”, has just 171 reactions, 146 comments and 63 shares on Facebook and just over 4,000 views on Youtube. Posts from The Skwawkbox appear to be being shared to a similarly modest degree.

While these are reasonable numbers, these sites have previously claimed to be outcompeting mainstream media outlets. The reach of this content suggests this isn’t the case at the moment – although this may in part be because of the coronavirus pandemic.

Using CrowdTangle, we can also see that this content is mostly being shared in obviously pro-Corbyn and anti-mainstream media Facebook groups.

This tallies with the Labour Together election review, which concluded that these sites operated in audience silos. This limited reach suggests that left-wing opposition to Starmer may be calcifying rather than actually spreading.

The future under Starmer

Throughout Corbyn’s leadership, left-wing alternative media and the Labour Party formed a relationship that provided a prominent political conduit for left-wing and anti-austerity messages. Because these outlets were perceived to represent Corbynism, many of the people who worked for them would appear on mainstream media almost in the role of spokespeople for the party.

The end of Corbyn’s leadership, the sacking of Long-Bailey, and the retreat of Corbynism therefore raises questions about the future, and influence, of these alternative media sites.

The content of these sites is characterised by ideological opposition to the Conservative government, challenges to the way politics is covered by the mainstream media and analysis of internal dynamics within the Labour Party.

All three drivers remain. Yet with the Conservatives now engaged in record levels of public spending as a way to recover from the COVID-19 Pandemic, the news perhaps not as distrusted as many think, and with Starmer enjoying high approval ratings, the wider appeal of these sites is arguably being squeezed.

There are, however, massive shifts occurring in British politics. From Whitehall reforms, to Brexit, to relations with China. There is opportunity for these sites to find new angles when covering Labour’s policies in the future – even if they don’t support the man himself as leader.