Beware of where you buy your face mask: it may be tainted with modern day slavery 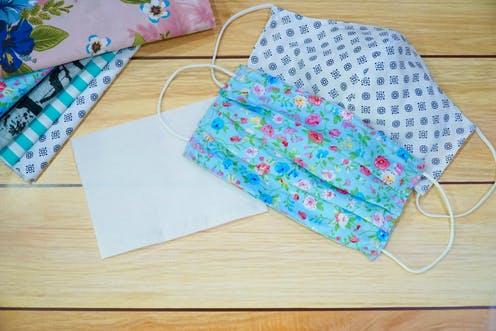 From July 24, people in England will have to wear a face mask when inside shops, as well as on public transport. This brings England in line with many other countries that have similar rules already in place.

Once mainly used in hospitals and science labs, masks, visors and disposable gloves are now a feature of everyday life. As a result, sales of these items are through the roof. This is cause for concern for many of the world’s poor, not just because protecting themselves is harder and more expensive in the face of a surge in demand, but because many will find themselves at risk of being exploited – becoming modern slaves – as production rapidly increases.

Over the last few years, following legislative reforms, big medical supply buyers, such as the NHS, have monitored their supply chains for modern slavery. They have found these practices among personal protective equipment (PPE) manufacturers, textile suppliers and medical device producers.

An exposé in the Guardian in 2018 revealed exploitation and slavery around NHS rubber glove suppliers, leading to reviews, reforms and contracts ending. The textile industry and mask makers have also been implicated in using child and bonded labour and for violating human rights.

This concerns us all. Some 40.3 million people are estimated to be in slavery, 25 million of whom are involved in making goods and providing services. According to the Global Slavery Index, the G20 countries alone continue importing products at risk of being made by slave labour worth US$354 billion (£278 billion) annually.

Coronavirus is driving many into unemployment and increasing economic vulnerability, making recruitment into slavery even easier and the profits of such exploitation higher. The International Labor Organization estimates that 1.6 billion people will lose their livelihood in the informal economy because of the pandemic. And the most vulnerable may become the unwitting victims of unscrupulous recruiters and companies that use bonded labour to ramp up production in the face of increased demand.

The issue is twofold. One, demand has surged, upending many of the usual mechanisms we use to address modern slavery. Supply chain monitoring has been reduced as urgent purchasing of PPE has become a priority and as people have bought their own equipment. Governments have lifted bans on buying PPE from companies known to use slave labour in order to get additional supplies. Two, more vulnerable people are making riskier decisions to survive economically, making recruitment into exploitation easier.

What you can do

Consumerism drives a lot of the economic motivation behind exploitation. We want cheap goods, so businesses secure slaves or underpaid, exploited workers to cut costs. By shopping differently and using what we already have to make what we need, we can change this. Reusing and repurposing the textiles we already have is not only more environmentally sound, it also reduces the risk of more people being enslaved.

We can use old clothes and bedding to make many necessary pieces of PPE, including making our own masks. The World Health Organization also provides information on using homemade masks safely.

Survivors often need work after they emerge from exploitation. Empowerment is critical and survivor-made goods create the possibility of real and lasting freedom while assuring you as a consumer that you aren’t supporting human rights abuses. Rethreaded and FreesetGlobal are two examples of such businesses. Look locally for survivor-run or survivor-employing businesses, many of which have moved into making PPE during the pandemic.

3. Buy goods from suppliers who check their supply chains for slavery

In the past, big businesses were often afraid of exploring their supply chains for fear that they’d discover something that would get picked up in the press. Legislation around the world has made these businesses consider the possibility of slavery in the supply chain and report on it. But you as a consumer also play a role.

You can start by checking a company’s modern slavery report. This often isn’t possible on third-party sellers on platforms such as Amazon or eBay, so a number of businesses have emerged that are selling PPE direct to consumer, including To The Market and Masks for Freedom.

These are just a few steps you can take when buying masks and other products to keep you and your loved ones safe. A number of apps also allow you to explore your wider slavery footprint, and help you buy products that protect fair trade, good labour practices and human rights around the world.

Sarah Steele receives funding from Bocconi University, including funds from the Wellcome Trust.

Lejla Sarcevic does not work for, consult, own shares in or receive funding from any company or organisation that would benefit from this article, and has disclosed no relevant affiliations beyond their academic appointment.