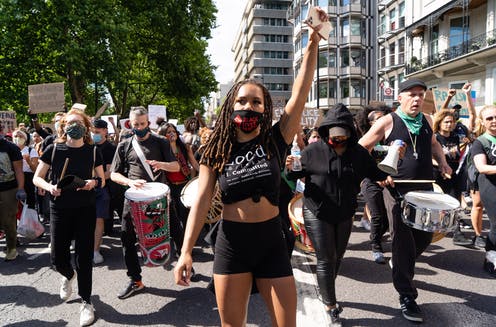 In the UK, one of the leading Black Lives Matter groups is BlackLivesMatterUK. But while it is a leading voice, it is at pains to stress that it is not the movement’s “leader”. In fact, the movement does not believe in leadersand aims to be non-hierarchical.

There has been some confusion about this approach to leadership with activist Joshua Virasami being wrongly named on occasion as the leader of the group. Virasami was wrongly targeted as leader in the fallout over the language used in a pro-Palestine tweet by the official BlackLivesMatterUK account. The post stated that “mainstream British politics is gagged of the right to critique Zionism”. These posts were met with anger by people and Jewish charities who argued that it endorsed antisemitic stereotypes and was not in line with BlackLivesMatterUK’s message of anti-racism.

BlackLivesMatterUK’s founders have largely remained anonymous. It is believed there is a core group of activists, of which Virasami is one of the only to be named. His visibility, paired with his profile as a controversial figure for his opinions on policing, Palestine and capitalism, is arguably the reason he has been misindentified as the leader of the movement.

However, while Virasami is the most vocal and public member associated with BlackLivesMatterUK, he is not the leader. Calling him such can result in all his opinions being considered one and the same as BlackLivesMatterUK’s, including those that aren’t shared by the movement.

The Black Lives Matter network around the world is based around the idea that everyone involved should be encouraged to step up and become leaders. But while this adds an element of egalitarianism to the movement, it can create problems, too. Mass global online organising by many spokespeople taken to be “leaders” has, at times, led to confusion about what the movement stands for and what its messaging should be. It has even led to contradictory activity on occasion.

Black Lives Matter emerged in response to the acquittal of George Zimmerman for the shooting of 17-year-old Trayvon Martin in 2013. Its founding members are Alicia Garza, Patricia Cullors and Opal Tometi. The group’s first official organising came with the Ferguson Unrest and Ferguson October protests in 2014 in response to the deaths of Mike Brown and Eric Garner. Eventually, individuals organising at Ferguson pushed the co-founders to create a chapter structure to continue to do this work together and to connect activists and organisers across the US.

There are rigorous assessments for prospective chapters to belong within the global network, including being registered as a legal entity and ensuring the alignment of their structure and principles. Membership provides access to other chapters, as well as the potential to receive funding from the global Black Lives Matter network.

Despite Black Lives Matter being a chapter-based nonprofit organisation, many individuals who have no ties to the global Black Lives Matter network have created structures online for community protest events under the name. This may be the result of the co-founders advocating for a horizontal structure of organising at the grassroots levels. A structure that favours democratic inclusion and forgoes hierarchy.

As such, whatever individuals decide – to belong or not to belong with the global network – it is essential to understand how social media has encouraged people to gather around social issues that have led to protest activities.

With the opportunity for anyone to lead, questions of trust and legitimacy have arisen around calls to protest and those organising under the Black Lives Matter name or hashtag.

A prime example of this is #Blackouttuesday. This was a symbolic “blackout” across Instagram where people were supposed to shared black squares alongside the hashtag #Theshowmustbepaused. The initiative was created by music executives Brianna Agyemang and Jamila Thomas to highlight racism within the music industry. It was intended to be a day of reflection while also platforming the voices of black people. However, as it grew, with high profile musicians like Rihanna and Cardi B taking part, it spread past the music industry and was taken up by people wishing to show support for broader issues of racial injustice.

Social media has made collective action in the absence of physical togetherness possible. It also provides key advantages for organising and participation in social movement activities, including lower entry costs and more accessibility for a wider range of people.

Social movement scholars Katrina Earl and Jennifer Kimport, suggest that we should not only look at web protest as its own separate entity but how people’s use of technology changes the dynamics of protest as a whole.

While online protest and organising has resulted in some confusion, social media and Black Lives Matter’s decentralised leadership structure has also empowered what Earl and Kimpton call “parties of one” to spark social change in ways not possible before. So, while there are disadvantages to decentralised leadership and online activism, there are also many benefits. But if you are going to take part, it’s worth doing some research before joining in.

Ashley Cole does not work for, consult, own shares in or receive funding from any company or organisation that would benefit from this article, and has disclosed no relevant affiliations beyond their academic appointment.