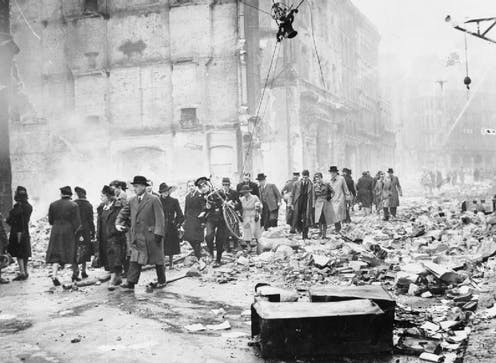 As COVID-19 spread in Britain, journalists and politicians took to comparing the pandemic to the blitz. From the “blitz spirit” to the death toll, the German bombing campaign in the second world war has become a go-to for evaluating Britain’s response to the current crisis.

But some historians have questioned the usefulness of blitz comparisons. Coronavirus does not reduce buildings to rubble. Sunny references to the “blitz spirit” conveniently overlook the looting that accompanied the blackouts. And though the death rates of the blitz and COVID-19 look roughly equal – the blitz saw deaths of around 43,000 while COVID-19 has killed nearly 45,000 – it’s unclear how this statistic is of much use. There is drama in this comparison, but not much substance.

An under-regarded but critical player in this comparison is the humble mask, an object that helps to show not how similar our moment is to the blitz, but how divorced. Mask-wearing was, in 1941, a completely uncontentious and even patriotic activity.

Face masks in the blitz

For the countless Londoners driven into communal shelters by nightly German air raids, personal space had become a luxury. This was particularly so for those who sought shelter in the London underground. For its perceived subterranean safety, by the blitz’s peak, some 150,000 citizens were sleeping in tube stations.

Though the dangers of close personal contact were not the only thing on the minds of concerned public health officials, preventing epidemic disease in the overcrowded spaces of the tube stations was a major concern. The mask emerged as a common-sense solution to the problem of thousands of shelterers suddenly using the tube’s damp, poorly ventilated spaces as their nightly abodes.

Eager to prevent an epidemic before it started, the Ministry of Health set up an advisory committee to investigate conditions in air-raid shelters, with special reference to health and hygiene. The official call for masks came in December 1940, two months into the blitz and just as flu season was getting underway, in a white paper that recommended their use alongside a raft of other preventive health measures. British scientists conscripted to the Medical Research Council’s Air Hygiene Unit were convinced: the “principle of wearing masks for protection against droplet infection” was a sound practice.

The Ministry of Health endorsed three types of mask: the standard gauze type (similar to today’s homemade masks); a cellophane screen (like today’s visors, but only covering the mouth and nose); and the commercially available “yashmak” (in the style of the Muslim veil), for the “fashion conscious”. The ministry ordered 500,000 masks to be distributed as needed in the event of an epidemic and commissioned an instructional leaflet for shelterers.

British newspapers publicised the government’s new policy. On February 5 1941, the Times reported that Sir William Jameson, the chief medical officer, had endorsed the new masks, and, more colourfully, Ritchie Calder, a journalist for the Daily Herald tried one out in public. “After ten minutes yesterday my anti-flu ‘windscreen’ ceased to be a source of ribald remarks,” he reported. “People round me became used to seeing me working in what looked like a transparent eye-shade which had slipped down my nose.”

Predicting that masks would become “as commonplace as horn-rim glasses”, Calder wrote that he could even blow his nose with his mask on. The only thing he couldn’t do “in comfort”, he reported, was “have a cigarette”.

A short propaganda film commissioned by the Ministry of Information and released in February 1941 also saw the mask message as self-evidently good sense. “If the shelter doctor or nurse gives you a mask,” the narrator exhorted, “well, wear it!”

The scientific and political consensus on masks that rapidly formed during the blitz stands in sharp contrast to the acrimonious debate that has unfolded over the past months alongside the UK government’s evident reluctance to compel people to cover their faces, even in crowded, indoor spaces. The humble face mask has become a polarising and polarised object.

If there is a lesson to be learned from the blitz, it may be that there is nothing inherently contentious or un-British about covering our faces to counter contagion. In 1941, masking up was accepted as a sensible, patriotic, British thing to do.

Despite protests to the contrary, the source of the COVID-19 mask controversy is not rooted in longstanding concerns about individual rights or British character. We need to look elsewhere to find its source: to the general breakdown in communication and trust between experts, the government and members of the public, that became a mainstay of contemporary life well after the blitz had passed and has been exacerbated by the pandemic.

2020-07-13
Previous Post: Here’s how scientists know the coronavirus came from bats and wasn’t made in a lab
Next Post: Coronavirus: Kazakhstan denies ‘unknown pneumonia’ reports but has imposed second national lockdown