Kanye for president: the dangerous allure of the celebrity politician 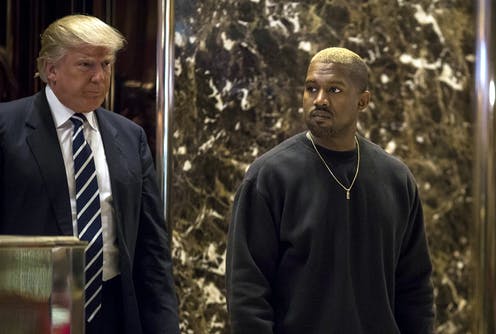 Rapper and sometime Trump supporter Kanye West has announced that he will be running for president of the United States. Without the tens of thousands of signatures needed to get on the ballot in all states or the backing of a small party, West’s chances of winning are almost zero.

Although West won’t be entering the White House any time soon, plenty of other celebrities have made a successful career in politics. A mix of charisma, media-savvy and anti-establishment airs can help them appeal to voters. We should be alert to what makes these people popular with voters because it rarely plays out well when they actually find themselves in office

In addition to Trump, the US has seen a swathe of celebrities turned politicians. The singer Sonny Bono, of Sonny and Cher fame, became the mayor of Palm Springs, California in 1988 and then was elected to Congress in 1994. Professional wrestler Jesse “the Body” Ventura was elected governor of Minnesota in 1999 and held the position until 2003. Then there was California governor and later US president Ronald Reagan, who rose to fame as a Hollywood actor.

This phenomenon is not limited to the US. The prime minister of Pakistan, Imran Khan, was a cricketer. The president of Guatemala, Jimmy Morales, was a comedian. The president of Ukraine, Volodymyr Zelensky, was an actor who played the president in the Ukrainian television show Servant of the People. All over the world, celebrities have become involved in politics, with some occupying the highest offices.

Celebrity and politics may seem to be a natural fit. Celebrities are often charismatic and well versed in engaging with the media. They already have more experience in working on camera and cultivating an image. Today, they also may have more understanding of how to use social media.

Unlike outsiders that come out of nowhere, celebrities also benefit from name recognition and their campaigns are more likely to garner media attention. For example, the media’s fascination with Trump’s antics earned him nearly $5 billion (£4 billion) worth of free airtime during the 2016 campaign.

The rise of celebrity politicians has, in part, to do with changes in politics from traditional political skills to media management and fundraising. While the qualities of a celebrity are often poorly suited to the duties of governing, they can attract the necessary attention from the media without any prior political accomplishment.

Additionally, increasingly blurred lines between entertainment and news (or infotainment) have lowered barriers for celebrities to enter politics. With the news focused on entertaining viewers more than informing them, profiling a celebrity candidate is a perfect story to run with.

But it is not just the role of the media and changes in politics that are important here. Voters are also drawn to celebrities because they are anti-establishment.

A break from traditional politics

Though celebrities are not necessarily populist, there are aspects of their appeal that are similar. Celebrities are well known, charismatic. Many who end up running for office lack a deep knowledge of politics and governing and have no experience governing.

They may be able to use a simplistic communication style and direct language that appeals to the common man and gives the impression that they are relatable. They also tend to not have the same academic backgrounds – for instance, degrees or associations with prestigious institutions – that many politicians have.

Like populists, some celebrities promote their lack of knowledge and expertise. For example, the former wrestler Jesse Ventura attacked people with college degrees and bragged about being the only candidate for Governor of Minnesota that did not have a law degree.

Counterintuitively, this anti-intellectualism is something that appeals to some voters who do not want to support a candidate that appears to be smarter than they are. These characteristics are seen as an advantage, representing a break from traditional politics.

Once in power, celebrities do not have a strong record of governing. Those that manage to be successful in political roles are the exception, not the rule. Their lack of experience and knowledge of laws and governing often make their political turns disastrous. At best, they continue with the status quo of dysfunctional politics.

One-time actor and former President of the Philippines, Joseph Estrada was impeached for corruption. The President of Guatemala, Jimmy Morales, has been accused of sexual abuse, though charges were later dropped, and blocking an investigation by the International Commission Against Impunity (CICIG) in Guatemala into his party and his relatives. The presidency of former singer Michel Martelly (known as “Sweet Micky”) of Haiti was dogged by delayed elections, accusations of corruption, political violence and rising poverty.

Most importantly the rise of celebrity politicians is not a sign of the democratic field becoming more interesting or open. The rise of such candidates is a sign of
political decline of democracies and wider frustration with professional politicians who voters feel disillusioned and distant from.

Natasha Lindstaedt does not work for, consult, own shares in or receive funding from any company or organisation that would benefit from this article, and has disclosed no relevant affiliations beyond their academic appointment.