How parasitic worms could lead to new treatments for asthma 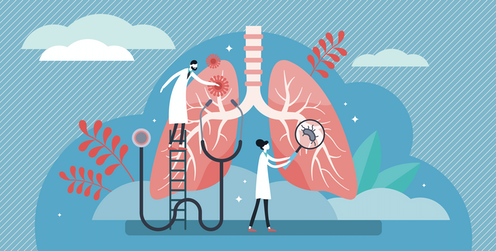 The UK has one of the highest rates of asthma in the world – around 9% of the population – with 60,000 emergency hospital admissions every year. This translates on average to three people dying from asthma in Britain every day.

Asthma is a condition characterised by difficulty breathing (wheezing), tightness in the chest, a persistent cough and recurrent “attacks” where these symptoms get suddenly worse. Although there are many types of asthma, the most common form is caused by an allergic immune response in the lung. This causes inflammation, which leads to the airway walls becoming thicker, less flexible, and less able to transfer oxygen into the blood.

The condition is usually treated with inhalers, which either relax the airways during an attack (reliever inhalers) or suppress the immune response which causes asthma (preventer inhalers).

In the severest type of asthma, regular preventer inhalers are ineffective. This form of asthma is especially dangerous and difficult to treat, and despite affecting only around 5% of all people living with asthma, uses a disproportionate amount of the estimated £1 billion cost of asthma to the NHS every year.

In the last ten years, researchers have started to develop treatments that target specific parts of the allergic immune response, treating the root cause of the disease.

Our research into parasitic worms has shown that they have developed similar tools against the host immune response and could teach us how to more effectively block allergies and asthma. Crucially, we have been able to identify molecules secreted by parasitic worms that could prevent or suppress asthma, leading to new treatments against this common and debilitating chronic disease.

Link between allergies and worms

It has long been noted that populations with high rates of worm infections tend to have less asthma. Over the last century in the developed world we have been very successful at getting rid of worms but have seen a huge rise in allergic diseases at the same time. But why would this be the case?

Allergies are an example of an over-enthusiastic immune response, directed against harmless environmental molecules such as pollen or dust. The reason we evolved these types of immune responses was not to make hay fever season miserable, but because they are particularly good at combating parasitic worm infections. However, parasitic worms are complex creatures that have evolved highly sophisticated techniques to allow them to avoid the allergic immune response and survive inside our body.

A critical trigger in the initiation of allergy is the binding of the immune messenger molecule IL-33 to its receptor in the lung. We found that HpBARI interferes in this critical step.

Research in animals has shown that IL-33 is required for the development of allergy, but also is required to effectively eject parasitic worms from the body. So we figured that parasitic worms would want to interfere with the interaction between IL-33 and the receptor, and if the molecules used to achieve this could be identified, they could be repurposed to stop allergies.

We found that when we applied parasitic worm secretions to immune cells, the IL-33 receptor disappeared. We searched through the elements of the worm secretions to find what was causing this disappearance, eventually narrowing it down to a single protein – HpBARI.

We discovered that HpBARI binds directly to the IL-33 receptor, hiding it from detection (hence the disappearing act) but more importantly preventing IL-33 from activating its receptor. In a mouse, administering HpBARI prevented the development of allergy, while adding HpBARI to human cells rendered them unable to respond to IL-33, indicating that the worm protein could be developed as an effective treatment.

Our research on HpBARI is continuing to assess if it could be developed into a treatment for asthma. But the story does not end there – parasites appear to have many ways of suppressing allergic immune responses, and work is continuing to find the next generation of molecules to treat human allergies, and to learn from these fascinating worms.

Danielle Smyth does not work for, consult, own shares in or receive funding from any company or organisation that would benefit from this article, and has disclosed no relevant affiliations beyond their academic appointment.