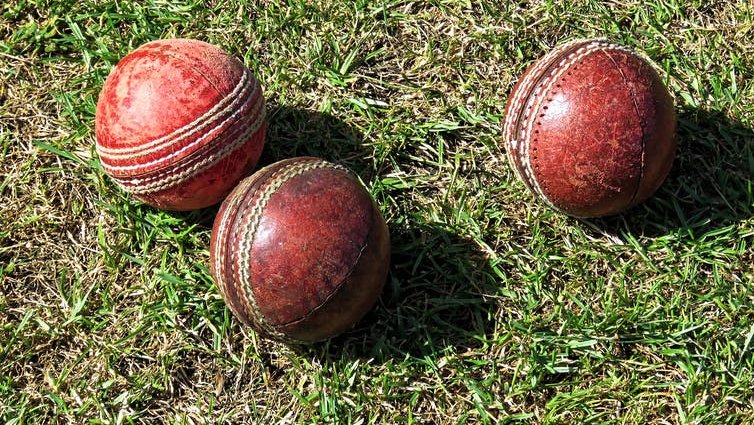 Cricket is now back on in England, despite Boris Johnson declaring cricket balls a “natural vector of disease”. His statement has frustrated cricket fans and players, but has also raised the wider question of which activities spread COVID-19. After all, unlike other activities that the UK government is actively encouraging, such as visiting pubs or restaurants, cricket is an outdoor sport where players are very unlikely to come into contact with each other.

To determine whether a cricket ball is particularly dangerous for spreading the virus, we need to consider the experimental evidence – though it is limited. Indeed, the prime minister’s comments reveal a broader truth about a lot of current health advice: there is often a big gap between the evidence available and the advice dispensed.

In this case, we need to consider how a cricket ball differs from other types of ball. A cricket ball is covered by leather sewn together using a distinctive seam. This is important, because much of the excitement of the game is created by using the seam and condition of the ball to change how it moves through the air and bounces in front of the batter.

A common way of making life harder for the batter is polishing one side of the ball (using saliva or sweat) while allowing the other side to deteriorate. This affects the aerodynamics of the ball, causing it to move (swing) towards the rougher side.

It’s known that the virus is present in infected people’s saliva, and given Boris Johnson’s enthusiasm for “common sense”, this is probably why he said that cricket balls pose a risk. But what does the research say?

One study has looked at the survival of SARS-CoV-2 on copper, cardboard, stainless steel and plastic, and in aerosol form. In temperatures between 21℃ and 23℃ in controlled humidity (40%), SARS-CoV-2 was found to be stable on plastic and stainless steel for up to 72 hours, although the amount of viable virus decreased over this time by a couple of thousand-fold.

Controlled laboratory experiments such as these are helpful to suggest what could happen, but need to be combined with direct observational studies to understand what does happen in the real world. For example, a study conducted in a Chinese hospital found that virus could indeed survive on everyday objects, detecting it on 20% of self-service printers and hand-sanitiser dispensers; 17% of desktop keyboards; and 16% of doorknobs, albeit in a setting where a lot of patients were known to be infected.

These are really interesting results, but how do they relate to cricket balls? The likelihood is not much, because scientific experiments are necessarily very precise. Without a relevant experiment, the notion that a cricket ball is a natural vector of disease is an untested assertion. So how could we confirm the prime minister’s claim?

This is where things get tricky. Firstly, we would need a good research question (known as a testable hypothesis). Words like “natural” and “disease” are vague and don’t belong in research questions. Perhaps something like “Is cricket more likely to spread COVID-19 compared to other [ideally named] activities?” would be a better place to start.

Next, a relevant methodology is needed. As SARS-CoV-2 is a respiratory virus, perhaps an experiment could involve a couple drops of a medical dye in the nose and mouth of cricket players to see how much ends up on the ball during the game.

However, not all players handle the ball the same amount during play. For instance, the wicket keeper, bowlers, team captain and perhaps umpires handle the ball most frequently. So the experiment would maybe need to use different coloured dyes for different players, or perhaps focus on specific players or roles (such as who shines the ball most often).

Another parameter to measure might be whether the dye gets from the ball onto other players, perhaps most relevantly their hands and faces, in order to “infect” them.

So far so good. But the next question, assuming the dye did spread between individuals, might be whether this would be representative of active viral particles. Of course, one way to test this would be to just let the game be played and see if cricket players caught COVID-19 more frequently than other sports players.

But rather than leave players potentially exposed to the virus, an alternative method might be to add coronavirus particles to a ball. You could then simulate game conditions by having people dressed in personal protective equipment throw the ball through the air and into grass, hit it with a bat, expose it to sunlight and then see how many of the particles are still active.

Finally, comparisons would be needed. Similar experiments could be conducted for other sports or environments to see how the risks of spreading the disease in cricket compared to these other activities. After careful analysis, peer review and publication, this research would provide the evidence the prime minister needed to justify (or not) his comment to parliament.

What this shows is proving or disproving a specific statement takes a lot of work. Right now, we’d probably feel there were better research priorities to concentrate on. Realistically, we’ll probably never work out the risk posed by cricket balls.

If this is the case, a pragmatic approach would be to reduce the most obvious potential risk by using hand sanitiser rather than saliva to polish the ball. Each player could then consider their appetite for unknown risk in the context of cricket, appreciating that the information to make a truly informed decision does not exist – something we should all bear in mind when considering the evidence for risks associated with many of our daily activities.

Simon chairs research ethics committees for the NHS, the Ministry of Defence and Public Health England, and sits on the Department of Health’s Confidentiality Advisory Group. He is also a coach at Hedge End Junior Cricket Club.

2020-07-06
Previous Post: The pandemic shows we need more Black scientists – but who will pay the cost?
Next Post: Modern monetary theory: the rise of economists who say huge government debt is not a problem