Your childhood neighbourhood can influence how your genes work – new study 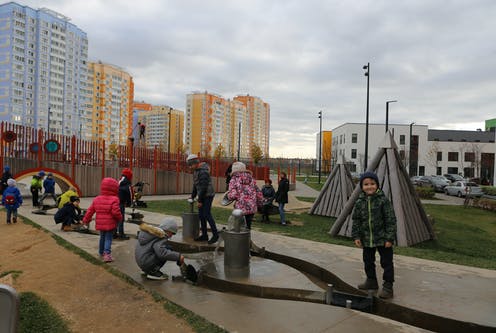 Numerous studies have shown that children who grow up in more deprived neighbourhoods tend to have worse physical health as adults compared to those raised in more affluent areas. This is the case even when researchers take into account family income and education, and whether or not parents have major illnesses.

In order to address this health disparity, researchers need to understand how those living in disadvantaged neighbourhoods end up with worse health outcomes. Our team’s latest study has highlighted one potential way your childhood neighbourhood may influence your health for years to come. It might do so through changing how the activity of your genes is regulated.

Gene regulation or “epigenetics” is the process of turning on or off genes. It’s an important part of how our bodies develop over time. For instance, a certain group of genes are turned on to increase hormone production during puberty. We call the set of ways that your genes are regulated your “epigenome”.

We found that children who were raised in communities marked by more economic deprivation, physical dilapidation, social disconnection and danger, displayed differences from their peers in their epigenomes. This was in comparison to those who grew up in well-off neighbourhoods, which had cleaner air and were more socially connected, safe and well looked after.

The epigenome is made up of proteins and chemical compounds that can change the activity of our genes by attaching to segments of our DNA. This doesn’t alter the DNA sequence but instead influences how our genes work. It can turn on a gene so it produces certain proteins, or turn it off so it doesn’t.

These proteins play a critical role in our bodies and are required for the structure, function and regulation of our tissues and organs. Activating genes that were dormant can sometimes have devastating effects. For example, this can allow a cancerous tumour to grow. But turning off genes can also interfere with normal development, such as preventing bones from growing.

For our study, we looked at the epigenomes of around 2,000 children born in England and Wales between 1994 and 1995, who we have been following over the past two decades. They grew up in neighbourhoods representing the full spectrum of socioeconomic conditions in the wider UK.

We used diverse data sources to characterise the physical, social, economic, and health and safety characteristics of these neighbourhoods. These sources included local government and criminal justice databases, systematic observations of images from Google Street View, and surveys with other residents.

This information was then compared with epigenetic data derived from blood samples that study members provided when they were 18. This is well before most people develop life-limiting health conditions such as cardiovascular disease or type 2 diabetes.

We found that in children who grew up in more disadvantaged neighbourhoods, there were already differences in the regulation of genes previously linked with chronic inflammation and the development of lung cancer, and with exposure to cigarette smoke and outdoor air pollution. This was the case even in those participants who didn’t smoke or actually have high levels of inflammation, both of which are known risk factors for heart disease, type 2 diabetes and cancer.

For example, participants raised in more disadvantaged neighbourhoods showed differences in the regulation of the CYP1A1 gene. This gene is thought to be involved in the way the body deals with chemicals commonly found in cigarette smoke and outdoor air pollution known as polycyclic aromatic hydrocarbons.

Our findings lend support to the idea that gene regulation may be one way that neighbourhood disadvantage causes long-term health disparities. The findings also suggest that outwardly healthy children from disadvantaged neighbourhoods may enter adulthood wired differently at the cellular level, which may lead to poorer health outcomes later on.

This is in line with previous research, such as a study of over 1,000 older adults living in the US that showed people living in disadvantaged communities displayed differences in the regulation of genes linked to chronic stress and inflammation. Again, these have both been linked to poor health.

It’s not possible to know yet whether the epigenetic differences we saw in young adults are lasting or if they could be modified. That’s something we will continue to research.

But our findings are an important reminder that our genes and where we’re raised work together to shape our health. Based on our findings it may be essential to start taking steps early to alter the large disparities in health and mortality currently affecting disadvantaged communities.