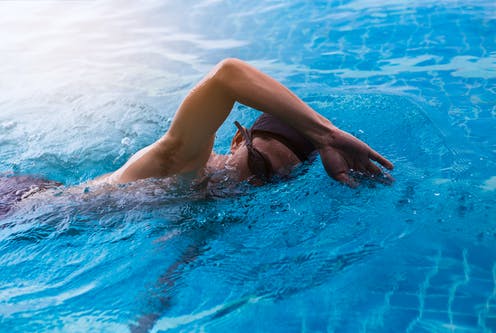 People often believe that exercise can make you hungrier, so they may therefore eat more during subsequent meals. But for the typical person, single sessions of land-based moderate to high-intensity exercise (such as running, resistance exercise and intermittent sprint cycling) have been shown to temporarily decrease appetite and do not commonly lead to increased food intake on the same day.

But across the 15 years that our group has been researching exercise and its effects on appetite, one particular question that we are often asked is “why does swimming make you hungry?” To date, this anecdotal question has not been tested in a rigorously designed experimental study. We therefore decided to compare the effects of swimming versus cycling and rest (control). We found that appetite and food intake were increased after swimming in both males and females.

We recruited 32 healthy adults under the age of 40 years (17 men and 15 women) who were able to swim and cycle at a recreational – rather than elite – level. None of the participants were obese. And because the menstrual cycle can influence appetite, we made sure female participants exercised during the same part of their cycle each month and were not pregnant. The participants completed all three trials (swimming, cycling, or resting) in a random order, separated by at least four days – so the effects of the prior trial no longer remained.

Participants were provided with a set breakfast (strawberry jam sandwich, croissant and orange juice) which they ate at home between 8:45 am and 9:00 am. Once they arrived at the laboratory, we measured their appetite using a scale at multiple times throughout the day. The participants rested throughout all three trials, except when performing 60 minutes of cycling or swimming in the exercise trials. The exercise sessions began 90 minutes after breakfast.

Thirty minutes after exercise – and at the equivalent time in the resting trial – participants were able to eat as much pasta as they wanted until “comfortably full and satisfied”. We found that the participants ate more during the swimming trial, which on average was 142 kcal more than in the control trial. This is equivalent to a 25g packet of crisps or two digestive biscuits.

Participants also felt hungrier after the swimming trial and felt that they could eat more at the next meal. And though participants also ate more after cycling (94 kcal on average) compared to the control trial, this difference was too small to be statistically significant. When we accounted for the energy used during swimming and cycling, the participants were still in an energy deficit in both exercise trials compared to the control trial, but the deficit was greater after cycling.

When we looked to see if there were any differences between men and women their responses were the same. This is important because it is sometimes suggested that for women, exercise is not as effective for weight management because women often expend less energy during exercise. But this suggestion is not always supported by the evidence as highlighted by a recent review, which concluded that men and women typically have similar appetite and food intake responses to exercise.

The reason for this appetite-stimulating effect of swimming is not understood. One possible reason relates to the suggested link between temperature (specifically body heat loss) and food intake. In colder temperatures, food intake may increase as a mechanism to generate body heat through diet-related thermogenesis. Thermogenesis is the body’s process of using energy to produce body heat. Despite the fact that swimming would have generated body heat during our experiment, immersion in the cool water would likely have led to overall body heat loss. Further research studies in swimming are needed to confirm this.

It’s also possible that changes in brain signals and neurotransmitters (chemicals that carry messages between nerve cells) might be a factor in increasing appetite. This is plausible because there are specific regions of the brain linked to appetite and reward, and non-homeostatic factors (such as eating for pleasure or the motivation to eat certain foods over others) can also influence appetite and eating behaviour. But detailed brain imaging studies are needed to address this.

Studies have shown that swimming may not be as effective as other types of exercise for weight management. Our findings lend preliminary support to this because of the increase in hunger and food intake after the swimming session. But follow-up studies are needed to examine more prolonged effects of swimming on appetite and energy balance.

This is not to say that people should stop swimming if they are trying to lose weight. It’s always important to be physically active, especially through activities you enjoy and will do regularly. But swimmers should be mindful that they could potentially eat more and should resist the temptation to eat readily available snacks, or eat a smaller portion at the next meal instead.

Swimming, like any form of physical activity, is absolutely vital as part of a healthy lifestyle due to the many associated health benefits. This includes improved blood pressure, cholesterol and glucose control, all of which reduce the risk of type 2 diabetes and heart disease. But for those wanting to use swimming to lose weight, it is important to be aware of any possible increases in appetite and food intake.

Alice Thackray, David Broom, and James King do not work for, consult, own shares in or receive funding from any company or organisation that would benefit from this article, and have disclosed no relevant affiliations beyond their academic appointment.