Coronavirus: the antibody drugs few people have been discussing – until now 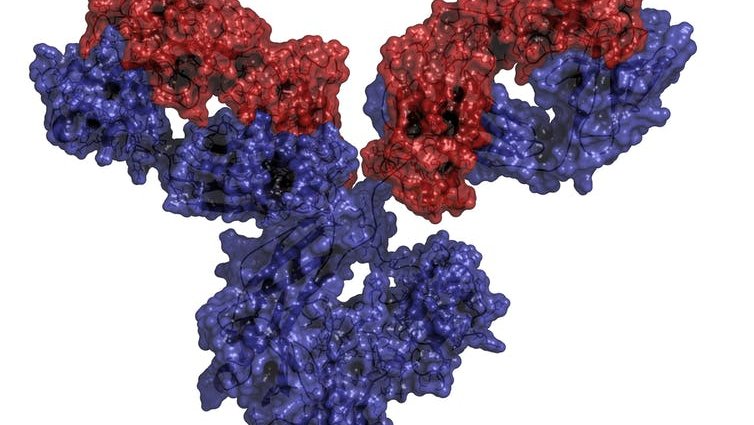 Since the start of the COVID-19 pandemic, researchers have been working around the clock to find an effective treatment. The first drug to show promise is dexamethasone, a cheap, widely available steroid. A large clinical trial run by the University of Oxford showed that the drug cut the risk of death for COVID-19 patients on ventilators by a third, and by a fifth for those on oxygen.

Peter Horby, the chief investigator on the trial, described the results as a “major breakthrough”. However, dexamethasone is not a panacea. Its beneficial effects are confined to critically ill COVID-19 patients in need of respiratory support. It has less impact on those with milder forms of the disease.

What is encouraging about dexamethasone is that it provides a proof of concept for future therapies. The drug works by blocking the overactive immune response triggered by SARS-CoV-2, the coronavirus that causes COVID-19. This can cause excessive inflammation – a complication often far more damaging than the virus itself.

Dexamethasone is just one of several anti-inflammatory drugs now under investigation as a potential treatment for COVID-19. A large proportion of these drugs – many of which have appeared in the past few years – are monoclonal antibody (mAb) drugs. These drugs contain antibodies – Y-shaped proteins produced by the immune system to combat foreign substances, such as bacteria and viruses. In the case of anti-inflammatory drugs, the antibodies are engineered to block overactive cytokines, small proteins that regulate the inflammatory response.

Antibodies have been used to fight disease ever since the closing decade of the 19th century when it was found that serum from animals that had survived diphtheria and tetanus conferred immunity in animals with no previous exposure to such diseases, and could cure the diseases. This form of treatment, known as serum therapy, was so successful that it was the mainstay of treatment for infectious diseases until the rise of antibiotics.

For much of the 20th century, the only source of antibodies were those that could be obtained from serum extracted from the blood of previously immunised animals. This, however, was a time-consuming and expensive process, impossible to standardise.

The situation only changed after a breakthrough made at the Laboratory of Molecular Biology, Cambridge, England, by César Milstein, an Argentinian immunologist, and Georges Köhler, a German biologist. In 1975 they published a technique to produce limitless quantities of identical antibodies to a specific target.

The method involves creating a hybrid cell line, known as a hybridoma, by fusing a short-lived antibody-producing B cell, a type of white blood cell, collected from the spleen of an immunised animal with an immortal cancer cell line. Maintained in a medium, the hybridoma can generate large quantities of what is known as “monoclonal antibodies”. The term “monoclonal” denotes the fact that the antibodies are all identical and clones of a unique parent cell.

Awarded the Nobel prize in 1984, Milstein and Köhler’s invention was soon used to treat people. The first mAb drug was licensed in 1986. Since then, more than 80 mAb drugs have been licensed in the US and Europe. They now make up a third of all new medicines introduced worldwide. Most of these are directed towards cancer and autoimmune disorders, such as rheumatoid arthritis and multiple sclerosis.

Despite their success, little attention has been paid to the potential of mAb drugs for treating COVID-19. This is somewhat surprising given their strong track record for treating immune disorders. Also, they are much quicker to develop than the vaccines and antiviral drugs currently grabbing the limelight.

Part of the explanation may lie in the fact that only three mAb drugs have so far been licensed for infectious diseases. The slow progress in this area stems from the dominance of antibiotics, which are cheap to make and easy to take. However, because of the rise of antibiotic resistance, attitudes have recently begun to shift towards developing mAb drugs to treat infectious diseases.

In the past, mAb drugs were considered unsuitable for infectious diseases because they are very expensive to make. But advances in recent years have helped to reduce their cost.

Another obstacle is the fact that mAb drugs need to be given intravenously. But this is not such an issue for seriously ill COVID-19 patients who already receive intravenous infusions in intensive care.

Several mAb drugs already approved for other conditions are now being tested for COVID-19. They include drugs used to treat rheumatoid arthritis and other inflammatory conditions. Among them is infliximab, which made history in the 1990s by overturning the conventional view that a mAb drug would never succeed as a treatment for inflammatory disorders.

Aside from their potential to curb COVID-19 related inflammation, mAbs could help in another way. They could be used to protect people at high risk of exposure to the infection, such as healthcare workers, and people with compromised immune systems, such as those receiving chemotherapy. Known as passive immunisation, this type of preventative treatment has been used for centuries.

The mAbs used for passive immunisation are very different from those used for treating the inflammatory components of COVID-19. It involves using mAbs specifically targeted against the SARS-CoV-2 virus. Such mAbs have a couple of advantages over vaccines: they are much faster to develop and they provide immunity within minutes. The downside is that the protection only lasts for a short time – typically months.

2020-07-04
Previous Post: Why short-term forecasts can be better than models for predicting how pandemics evolve
Next Post: How to improve our relationship with nature after coronavirus