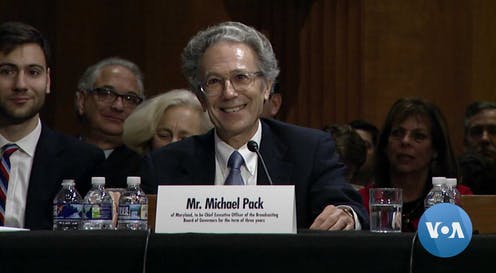 Journalists, scholars, media freedom organisations and even senior Republicans have been alarmed by the appointment of Donald Trump’s nominee, Michael Pack, as chief executive of the US Agency for Global Media (USAGM), which oversees state-funded international media.

Pack has been described as an ally of Steve Bannon, the chief executive of the far-right media outlet, Breitbart News. Within two weeks of his formal appointment on June 4, Pack had “purged” the heads of four state-funded news organisations, Middle East Broadcasting, Radio Free Asia, Radio Free Europe/Radio Liberty, and the Open Technology Fund. He is now being sued by former members of these organisations’ advisory boards, who claim that this mass sacking breaks federal guarantees about their journalistic independence.

The director and deputy director of Voice of America (VoA) resigned on June 2 two days before Pack took up his post. The radio network – which is the largest and best-known international news organisation funded by the US – also has a statutory “firewall” designed to protect its editorial independence. Yet VoA is also obliged to carry “editorials” which present the views of the US government – editorials which Pack has ruled must now be positioned much more prominently.

Journalists at VoA are reported to be seriously concerned that Pack intends to “interfere with VoA’s independent newsroom and turn it into a pro-Trump messaging machine”. These fears are likely to be exacerbated by recent legislative changes allowing VoA to broadcast domestically, which was previously forbidden under “anti-propaganda” laws passed during the cold war.

But perhaps the most obvious cause of concern is VoA’s increasingly fraught relationship with the White House. Earlier this year, Trump’s criticisms of VoA escalated, when he alleged that its journalists were spreading “Chinese propaganda” about coronavirus. Then, just before Pack’s appointment, VoA journalists used a Freedom of Information request to discover that that the Centers for Disease Control and Prevention had emailed staff telling them to ignore media requests from VoA journalists.

So, how will VoA journalists respond to Pack’s new appointment? In an introductory email to the staff of state-funded media organisations, Pack stressed his commitment to honouring VoA’s charter and the independence of its “heroic” staff around the world. The White House then issued a press release claiming that Pack’s reassuring message was met with an “overwhelmingly positive response” from journalists and grantees “who personally reached out and candidly congratulated him.”

One is even cited as having said: “I am sure that with your arrival, we will be able to rejuvenate our agency, to get rid of any bias and partisanship, and will be able to adequately transmit America’s image and ideas to the outer world.”

Our recently published research shows that Pack’s appointment is unlikely to be viewed enthusiastically by many VoA journalists. Over the past five years, we have studied the relationships between journalists at various state-supported news outlets and the countries that fund them. The VoA journalists we spoke to said they had been seriously worried for a long time about Pack’s nomination, and their organisation’s relationship to the Trump administration.

Their concern was initially prompted by Trump’s notoriously poor relationship with the media, when combined with other legislative changes (passed late in the Obama administration), which removed the regulatory power of the bipartisan Broadcasting Board of Governors. As one put it:

We all saw what happened during the [election] campaign and the various different attacks on the media that the president, as a candidate, was waging.

There was a concern amongst journalists  …  that [without the BBG firewall] there would be some sort of real focus on how VoA can reach audiences around the world, and a look at, perhaps, how the White House can take advantage of that.

However, VoA journalists also thought that the radio network was vulnerable to political interference because of specific tensions within VoA’s Charter. This obliges the network’s journalists to offer “accurate, objective, and comprehensive” news while “present[ing] the policies of the United States clearly and effectively.”

The charter states that VoA output should include “responsible discussions and opinion” on these policies, rather than simply representing the views of a “single segment of American society.” But this inevitably means that, as one editor put it, journalists report on international news “through the prism of United States’ government policy”.

The “red line” for VoA’s news journalists seemed to be their ability to make editorial decisions without explicit interference from the US government. Indeed, some told us that they had already decided to resign if the administration tried to use Pack’s appointment to curb their editorial independence. However, VoA journalists are not alone in experiencing serious ethical quandaries about their relationship to their funding state.

Our research shows that a series of events between 2015-2018 have made it increasingly difficult for journalists at other state-funded international media to avoid confronting their role in diplomatic struggles for influence.

The most obvious example of this is international media funded by China, the premier of which takes an increasingly centralised and controlling approach to state-funded journalism. Journalists working for China Global Television Network (CGTN), who had previously been allowed far more editorial discretion than their colleagues at other China-supported outlets, were deeply distressed by growing censorship, and other kinds of managerial intervention. This threatened their sense of themselves as “journalists”, with one even saying that they worried that the network was being pushed “towards the point of propaganda.”

By contrast, we found no evidence that the UK government interfered in editorial matters. But its explicit framing of generous funding for the BBC World Service in terms of British security interests seriously troubled some journalists, especially those working in sensitive areas, such as former British colonies.

Although the Qatari government does not appear to have restructured or reframed its relationship to Al Jazeera English, its journalists became acutely aware of their involvement in international struggles during the Gulf diplomatic crisis, when Qatar’s neighbours and their allies demanded that Qatar close the network down.

Journalists working for all of these state-funded news organisations have struggled to reconcile their understandings of their diplomatic role with their ideals of journalistic independence. Yet no matter how fraught relations with their funding governments became – and how compromised journalists sometimes felt – it was very unusual for them to resign or come together to resist state pressure en masse.

Indeed, we found that active resistance only happened when journalists feared that they would lose all credibility in the eyes of journalists outside of their news organisation, thus seriously damaging their own career prospects. So, the decision of the two most senior executives at VoA to resign, just before Pack’s appointment, should not be underestimated.

Instead of resisting government pressure, we found that journalists tended to use what we call “legitimising narratives” to reassure themselves and others that their work was still worthwhile. First, they compared themselves favourably with a shared “other” – Russia Today – arguing that they did not disseminate “state propaganda” like RT, because they told the truth. At other times, they would talk about the resources and access that their state funding gave them to do morally important, but time-consuming and expensive forms of investigative reporting — money that is increasingly vanishing at commercial news outlets.

Finally, the journalists would talk about the concept of “soft power” – and the fact that the government funded their news outlet to make them “look good” abroad. This soft power could only work, the journalists reasoned, if their news outlet was perceived as reporting in an independent and credible manner. So, they said they felt reasonably confident that the state was unlikely to erode their freedom further in the future. The latest events at VoA suggest that this confidence may have been misplaced.

2020-07-03
Previous Post: What is methamphetamine or ‘crystal meth’?
Next Post: Coronavirus: the future of women’s football is under threat