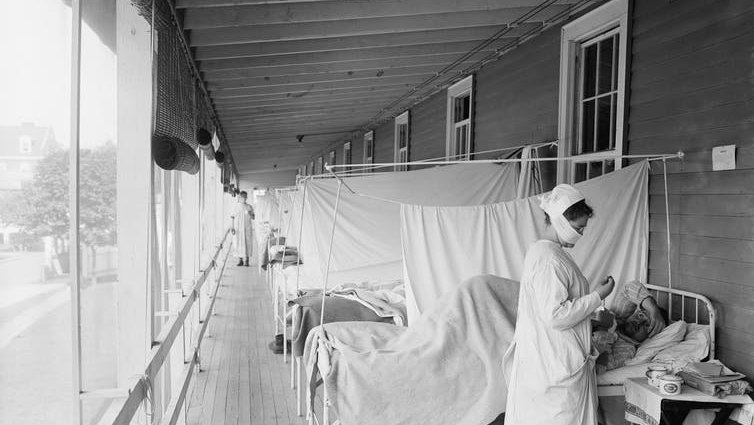 Societies of the past were often better at dealing with problems than those of the present. It’s a sign of our complacency that early warning systems were not in place before COVID-19 struck. This was despite the fact that the past century witnessed four major respiratory pandemics – the 1918-19 Spanish flu, 1957-58 Asian flu, 1967 Hong Kong flu and the 2009 H1N1 outbreak – each of which infected many tens of millions of people around the world and killed in large numbers.

Centuries ago, states understood the risks of infectious disease and had containment measures in place to make sure cases were quickly identified and prevented from spreading. Milan, for example, which had been badly hit by plague in the 1360s, put in place extensive networks of agents tasked with paying particular attention to reports of outbreaks of disease and monitoring trade routes and mountain passes for signs of infections.

The health authorities in the Ottoman Empire likewise fought a long-running battle over the course of many centuries against regular outbreaks of plague in Constantinople, Damascus and Aleppo in the 15th and 16th centuries. This resulted in the introduction of steps to identify and respond to cases rapidly and efficiently. It was the same story in the Ionian islands under the Venetians in the 17th and 18th centuries, and no coincidence that when measures failed, as they did twice in this period, it was because of misdiagnosis or delayed notification.

The aftermath of COVID-19 will presumably see a return to such levels of alertness. However, it is the long-terms effects of the disease that may have the greater impact on the world we live in.

New research on the health, educational and productivity of Brazil in the early 20th century has revealed that despite directly killing few people there, the Spanish flu led to a marked increase of still births and infant mortality in the country into 1920. There were sharp changes, too, in sex ratios of new-born children, with a spike in the number of births of girls relative to boys, largely because female foetuses are less vulnerable than male foetuses to disease in general.

Over the next two decades, there was also a noticeable improvement in male literacy levels in Brazil, alongside a deterioration in female literacy levels in districts with greater influenza exposure. This was presumably because greater efforts went in to educating young boys, at the expense of girls. Such gendered educational imbalance is often seen in distressed communities, such as in Indonesia following the tsunami of 2004.

It’s these sort of lessons from the past that will be so important to apply when it comes to developing policies in the wake of the current pandemic, which should correct for disadvantages. Another example comes from data from US censuses conducted in 1960, 1970 and 1980. Those conceived or in gestation during the 1918-19 flu crisis in the US had reduced educational attainment, lower lifetime incomes, and disability rates that were 20% higher compared to those in other birth cohorts.

Devising ways to compensate for such long-term disadvantages is crucial because pandemics correlate closely with violence, intolerance and racism. This is something shown most strikingly in the case of cities in Germany a century ago. Cities and areas that suffered the most deaths during the Spanish flu spent on average less per person on their inhabitants in the decade that followed than those cities with lower mortality rates, especially on areas affecting young people – most notably school funding.

These urban centres in Germany that experienced the most deaths and the lowest investment subsequently were also significantly more likely to vote for extremist parties during the federal elections of 1932 and 1933 that ultimately propelled Hitler to power. This is the case even after controlling the data for factors such as demographics, war-related change and unemployment.

This echoes research that suggests that places badly affected by the authorities’ responses to disease require higher levels of trust-building to compensate and to re-calibrate how citizens respond to government advice in the future. Such places may also need greater levels of intervention to ensure that social and political polarisation do not take root and lead to intolerance and xenophobia in years to come.

Listen to Recovery, a series from The Anthill Podcast, to hear more about how the world recovered from past crises, including an episode on the recovery after the Spanish flu.

The deep roots that pandemics have with extremism, violence and xenophobia can span centuries. During the Black Death in the 1340s, Jews were often accused of being responsible for a disease that, like COVID-19, also came from Asia.

Under torture, wrote the friar Herman Gigas, many Jews were forced to confess to breeding “spiders and toads in pots and pans” and to poisoning wells to kill Christians. The antisemitic persecutions were worst in Germany, where Jewish communities in some towns were burnt alive inside synagogues where they had taken refuge.

Antisemitism persisted in Germany in the intervening centuries. When expressions of violence against Jews became normalised in the 1920s, attacks were six times more likely to take place in towns and cities where Jews had been murdered 600 years earlier.

Support for the Nazi party was also significantly higher in these urban locations. Places where there was a high level of persecution of Jews during the Black Death correlate closely with places where most damage done to synagogues on Kristallnacht in 1938. Levels of deportations of Jews to concentration camps between 1933-44 were as much as 15% higher in cities that held pogroms during the 14th century than those that did not.

Read more:
Epidemics have often led to discrimination against minorities – this time is no different


Failure to learn from the past is a key part of the COVID-19 story. There are remarkably similar patterns when you look at how US cities have fared during the current pandemic compared to during Spanish flu. Cities like San Francisco that performed well in 2020 also did so a century earlier because they had mayors who took drastic action. Those like New York, which took a more laissez-faire approach on both occasions, paid a heavy price each time.

As history can show us if we ask the right questions, the impact of COVID-19 will have consequences that stretch decades, perhaps centuries, into the future. But to look to tomorrow, it’s important to understand the past – and to apply the valuable lessons it can teach.

Peter Frankopan does not work for, consult, own shares in or receive funding from any company or organisation that would benefit from this article, and has disclosed no relevant affiliations beyond their academic appointment.

2020-07-03
Previous Post: What coronavirus success of Taiwan and Iceland has in common
Next Post: Why some homeless people prefer sleeping rough to hostels or hotels