Did a volcanic eruption in Alaska help end the Roman republic? 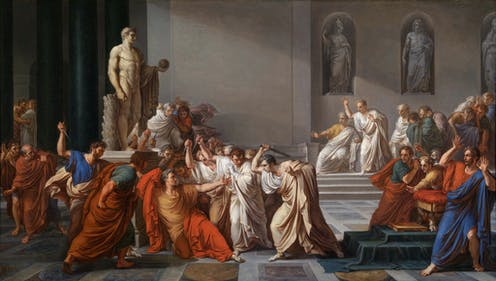 Julius Caesar was assassinated on the Ides of March (March 15) in 44BC and a bloody civil war followed. This brought down the Roman republic and replaced it with a monarchy led by Caesar’s nephew Octavian, who in 27BC became the emperor Augustus. A group of scientists and historians suggest that a massive volcanic eruption in Alaska played a role in this transition, as well as helping to finish off Cleopatra’s Egypt.

The study, led by Joseph R McConnell of the Desert Research Institute in Nevada, demonstrates how careful scientific research on ancient climate can add context to our more traditional scholarship. At the same time, the research raises challenging questions about how we integrate such data into historical narratives without oversimplifying the story.

Caesar’s assassination came at a time of unrest for the ancient Mediterranean. This was exacerbated by strange atmospheric phenomena, and unusually cold, wet weather that caused crop failures, food shortages, disease, and even the failure of the annual Nile flood on which Egyptian agriculture relied. In 1988, classicist Phyllis Forsyth suggested that an eruption of Mount Etna in Sicily in 44BC was responsible for these problems because the aerosol particles released into the atmosphere would reflect sunlight back into space and cool the climate.

While McConnell’s team agreed that the Etna eruption could have caused some of these disruptions, they have now argued it was a later massive eruption of the Okmok volcano in Alaska that altered the climate and helped weaken the Roman and Egyptian states. They drew on three strands of evidence to support their claim.

The first came from ice samples taken from deep in the Arctic ice sheets, which trapped air as they formed over hundreds of thousands of years, providing a datable record of atmospheric conditions. These ice cores showed there was a spike in solid particles, dust and ash from a volcanic eruption early in 43BC. The researchers then showed the geochemical properties of these particles matched with samples from the Okmok volcano.

For evidence for the ancient climate, they then looked at tree rings and speleothems (stalactites and stalagmites) from various parts of the northern hemisphere, including China, Europe and North America. These suggested that 43BC to 34BC was the fourth coldest decade in the last 2,500 years, and 43BC and 42BC were the second and eighth coldest years.

Data from the research was then fed into a computer-based climate modelling system called the Community Earth System Model (CESM), which produced a climate simulation. This showed that the eruption of Okmok could have caused cooling of 0.7˚C to 7.4˚C across the southern Mediterranean and northern Africa in 43-42BC, which persisted into the 30s BC.

This could also have led to increased summer and autumn rainfall that would have damaged crops. At the same time, drier conditions in the upper reaches of the Nile may have led to its failure to flood in 43BC and 42BC.

In this way, McConnell’s team make a good case for Okmok’s potential impact on temperature, rainfall and a resulting change in agricultural production in 43BC and after. But the conclusions they draw about its impact on the bigger historical picture are less certain.

One of the major problems with scientific papers in which climate events are blamed for major historical changes is that they are not able to fit in much analysis of the historical issues themselves. These tend to be reduced to straightforward events or problems that can then be easily “explained” or “solved” by science. The realities, when we zoom in, are much more messy.

The transition of Rome from a republic to a monarchy – via a period of rule by the competing triumvirate of Octavian, Mark Antony and Lepidus – was a long and complex process. It involved many people and parties with different motivations and plans. The whole period poses a challenge to historians and entire books have sought to describe and explain it.

But this civil war was only the latest in a series of escalating conflicts in the later period of the republic, in which the behaviour of earlier figures, like Sulla, who had seized control of Rome decades earlier, became precedents for what might be possible.

The outcome of the war and the establishment of a monarchy was not inevitable. Rather than a narrative of crisis, decline and fall, the period can even be seen as one of political experimentation, of state formation, of attempts to solve the problems that beset the republic.

This period of war relied on manpower and the capacity of state apparatus to extract and redirect food and money from society. Despite ancient sources that report difficulties with this extraction, we should remember that the machinery that enabled it remained essentially in working order. Without it, armies would not have been fed and the civil wars would not have been able to happen.

And while the failure of the Nile floods in 43BC and 42BC would certainly have been bad, Egypt was up and running again soon after. Antony and Cleopatra were able to raise and maintain armies, fight, and were finally defeated only in 31BC in the naval battle of Actium. If people were going hungry, the conflict itself and profiteering grain dealers were perhaps more to blame than the climate (as was the case in the Ethiopian famines of the 1980s).

The effects of Okmok’s eruption in 43BC may have been serious, as McConnell’s team argue. But it is also very clear that personal, political and military decisions – and chance – were the direct determiners of how history unfolded in Rome and Egypt. There were many points in the years after 44 BC at which things could have turned out quite differently, whatever the climate was like.

The military activity of the period alone would seem to show that both Rome and Egypt were quite resilient, overall, in the face of natural hazards, and as states they continued to transform in an ever-changing world.

Guy D. Middleton receives funding from the European Regional Development Fund-Project “Creativity and Adaptability as Conditions of the Success of Europe in an Interrelated World” (no. CZ.02.1.01/0.0/0.0/16_019/0000734).

2020-07-03
Previous Post: Coronavirus: there is an urgent need to re-open schools – this is how to make it happen
Next Post: Coronavirus could accelerate dying pub culture – is community ownership the answer?