Davos: three ways leaders can use these summits to create a more sustainable world 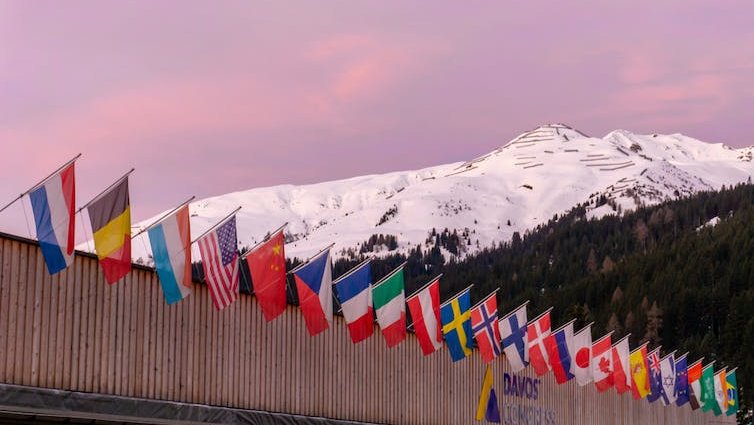 Davos 2023 is the World Economic Forum’s (WEF) first in-person annual meeting since the start of the COVID pandemic. The yearly gathering sees business, political and civil society leaders convene in the Swiss mountain resort with academics, journalists and celebrities to discuss global economic agendas. Many regard it as essentially a forum for the wealthy, but the 2023 Davos summit has returned at “a critical inflection point for the world”, according to the WEF.

This year’s meeting slogan – Cooperation in a Fragmented World – nods to what the WEF’s recently published Global Risks Report calls the “polycrises” affecting our interconnected world. These intersecting crises range from climate change and energy shortfalls to food insecurity and forced migration. The WEF is calling for “bold collective action” to address them.

In the wake of COVID, many people seemed to be more aware of how vulnerable the world is to the excesses of economic production. UN secretary general, António Guterres, declared that we needed to build more “sustainable economies and societies”, and wider hopes abounded for greater global co-operation on human and environmental health.

Then, as much of the world emerged from lockdowns and restrictions, national governments refocused on economic recovery. This appeals of course to the oldest human impulses of progress. But it also led to a missed opportunity to rethink how economies should be organised for a more sustainable world. Global leaders could have used this time to respond to the ecological damage of late modern capitalism by working towards a more regulated, socially and environmentally responsible economic system.

Political leaders across the world may have failed to take this chance immediately after COVID, but the UN explored these issues and published a new vision for global security in 2022 called New Threats to Human Security in the Anthropocene. I was one of the background authors for the report, which sets out three vital challenges for securing the sustainability of the planet:

1. Protect both human and environmental security

The UN report documents the lack of global action in response to alarming scientific measures of planetary health – from greenhouse gas emissions to temperature rise, from deforestation to biodiversity loss. It underlines the connections between industrial economic production, climate change and human health.

Among the many reasons why the impact of capitalism on the environment has yet to be fully recognised, one of the most important is the political ascendancy of neoliberalism. This way of thinking promotes free-market ideas that have long sidelined the environment in advancing economic development. The UK government’s 2021 Dasgupta Review – which examines the relationship between economics and biodiversity – made the same point.

Neoliberalism consistently prioritises military and economic security over human and environmental security. This has meant that global economic production values profit over both planetary and human health. Probably the best examples of this are the rise of “Big Farm” agribusiness and the role unregulated wildlife markets may have played in the emergence of COVID.

Defining and measuring development is also an important consideration for today’s world leaders. But when linking economic growth to development, it’s important to use measures other than GDP.

Read more:
Beyond GDP: changing how we measure progress is key to tackling a world in crisis – three leading experts


The UNDP’s 2020 Human Development Report introduced what it calls “planetary pressure adjustments” to measure human development. This classifies a country’s development not just in terms of economic prosperity, but also in relation to carbon emissions and resource use per person.

Other alternative models and measures of economic welfare, including degrowth, are gaining traction with policymakers. Supporters of degrowth want to transform how wellbeing is measured and how our economies are regulated to ensure resources are used more sustainably. But this requires both political acceptance and wider public buy-in.

Read more:
Degrowth: why some economists think abandoning growth is the only way to save the planet – podcast


3. Use global governance to create a shared planet

Building consensus on how to create a more sustainable world will take collective global action on shared interests. It will require solidarity and robust global governance tools to enable regulation and accountability. This means legal consequences for countries that don’t adhere to agreed conventions such as the Paris Agreement on climate change, or the Council of Europe Convention on landscape. And international organisations such as the World Health Organisation will need more powers to oversee international laws such as the International Health Regulations in monitoring and combating the global spread of disease.

Governments can also use financial incentives to encourage companies to protect biodiversity and advance nature-based solutions to industry problems. Technology can play a part too, although it’s important to be wary of both the limits and rhetoric of the “technological fix”.

A more sustainable world means understanding the planet’s intersecting human and environmental crises, and working out how to address them holistically, cooperatively and responsibly. After that, the challenge lies in using the institutions and mechanisms of global governance that already exist, as well as pushing leaders to make brave decisions that put human and environmental security for all ahead of endless profit for the few.

John Morrissey was a background author for the UNDP 2022 Special Report on Human Security, "New Threats to Human Security in the Anthropocene".

2023-01-19
Previous Post: David Carrick: the vetting processes that missed a serial rapist in the Met police
Next Post: Ukraine war: supply of advanced tanks will give Kyiv an edge over Russia and move it closer to Nato