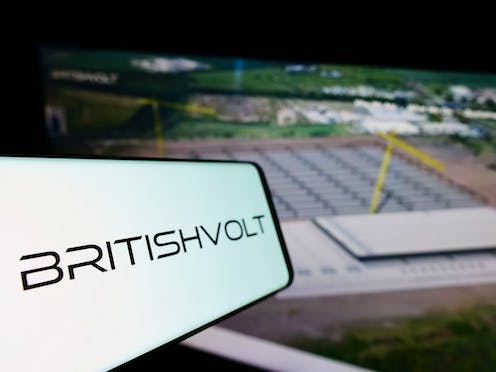 Britishvolt, the would-be electric vehicle (EV) battery maker that recently went into administration, always faced an uphill struggle. The start-up had no track record developing technology and never confirmed how it would raise the £3.8 billion needed to start mass producing batteries, which reduces the average cost per battery.

The proposed facility near Blyth, a coastal town in north-east England, was slated to contribute around a quarter of what the UK automotive industry needs, or enough for 330,000 battery packs a year. But with no major auto firms as customers, its business model always looked vulnerable.

This was despite keen promotion from Boris Johnson when he was prime minister and a pledge of £100 million in public funding if certain conditions on the factory’s construction were met. They weren’t, and the government kept the cash.

There remains hope that new ownership could rescue the business and that batteries for EVs could still be assembled at the site. For now, though, Britishvolt’s woes raise wider questions about the future of the UK automotive industry as it transitions to making EVs, and whether the government is doing enough to support it.

For the UK to become a leader in EV manufacturing, it needs large factories (called gigafactories) making EV batteries and quickly, as demand for EVs is taking off ahead of a 2030 ban on new petrol and diesel cars, and the requirement for all new cars to be fully zero emission by 2035. This is particularly urgent given the nature of the trade and cooperation agreement (TCA) between the UK and the EU.

The TCA requires that batteries in EVs have to be assembled in the UK or the EU by the end of 2026 for vehicles traded between the two to avoid tariffs. The UK is lagging well behind EU countries in attracting investment in battery-making, and Britshvolt’s collapse throws this into sharp relief.

Without a major effort to build a domestic supply chain that includes battery manufacturing, UK car assembly lines will increasingly be left producing obsolete internal combustion engine cars and dependent upon imported battery components from the EU to meet rules of origin requirements. That isn’t going to make much business sense.

In recent years, a lot of investment in battery gigafactories has skirted the UK, partly because of uncertainty caused by Brexit. Tesla boss Elon Musk said as much in late 2019 when justifying his firm’s decision to build its first major European gigafactory in Germany.

Along with Arrival’s decision to shift electric van production to the US and Mini pulling the plug on EV production in Oxford, for now at least, government hopes for the UK auto industry as an EV powerhouse seem stuck in neutral, if not reverse. The one piece of good news so far is that battery maker Envision has committed to a new gigfactory in Sunderland that will come onstream in 2025 – the only confirmed investment in the UK.

In a good year, the UK makes between 1.3 and 1.5 million cars. As the industry seeks to supply UK and EU markets in which petrol or diesel vehicle sales are being phased out from 2030, maintaining a similar level of production will require a lot of batteries.

The UK has been slow to get government support lined up for such investment. So far, only £800 million has been earmarked for the mass production of EV batteries. Demand for EV batteries in the UK could reach as high as 130 gigawatt-hours (GWh) a year by 2040, equivalent to the output of eight gigafactories with a capacity of 15GWh each. Meeting this demand would require an investment of between £5 billion and £18 billion by 2040 according to one estimate.

Meanwhile, there are at least 35 gigafactories up and running or under construction in the EU, including those by NorthVolt (in Sweden), Saft/Stellantis (in France and Germany), Samsung SDI (in Hungary), LG Chem (in Poland), and Tesla (in Germany).

The European Commission and seven member states have allocated around €6 billion (£5 billion) to help build up to 20 gigafactories and aim at having one-third of the world’s EV batteries being made in the EU by 2030. This is expected to serve an estimated €250 billion-a-year market by that time. EU member states are simply doing more to attract investment in battery production than the UK, with heavy financial support and special economic zones to woo manufacturers.

If the UK auto industry is to compete, it will need to produce its own batteries at scale. Domestic battery production will reduce supply chain costs and ease logistical difficulties. It should also help UK-based carmakers and battery manufacturers work more closely in areas such as battery cell technology and technician training – critical to the industry’s competitiveness.

For this to be possible, the government must think more creatively about how to target financial support for car and battery makers. And, in turn, the auto industry needs a more active industrial strategy and closer partnerships with government, especially with regards to reorientating skills and the supply chain towards EVs.

This isn’t about picking winners – demand for EVs produced in the UK and internationally is forecast to be there. And increasing UK sales of EVs indicate a growing domestic market for batteries. McKinsey consultants forecast that by 2040, battery demand for European EVs will reach 1,200GWh per year, or the output of 80 gigafactories with an average capacity of 15GWh.

The UK risks missing out on new investment in a growing industry. If the UK wants to maintain its large automotive assembly capacity as it transitions to making EVs, then it will need homemade batteries and on a large scale. Only a revamped industrial strategy can help make this happen.

Don’t have time to read about climate change as much as you’d like?

Get a weekly roundup in your inbox instead. Every Wednesday, The Conversation’s environment editor writes Imagine, a short email that goes a little deeper into just one climate issue. Join the 10,000+ readers who’ve subscribed so far.

Phil Tomlinson receives funding from the Engineering and Physical Sciences Research Council (EPSRC) for Made Smarter Innovation: Centre for People-Led Digitalisation, and the Economic and Social Research Council (ESRC) for an Interact project on UK co-working spaces and manufacturing.