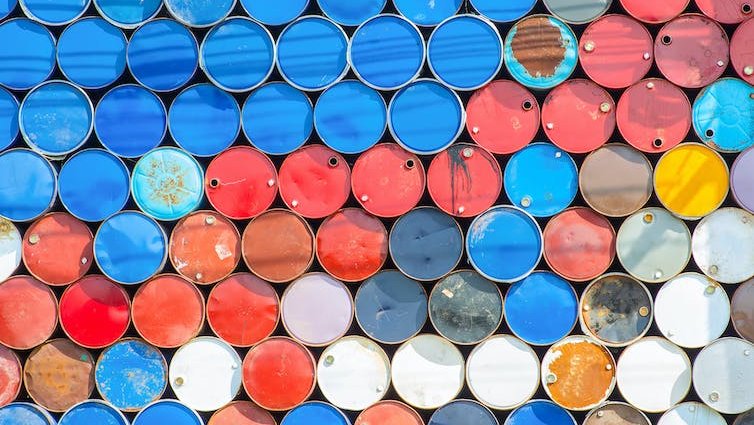 At the end of November 2022, UK prime minister Rishi Sunak announced that the “golden era” between Great Britain and China was over. China may not have been too bothered by this news however, and has been busy making influential friends elsewhere.

In early December, Chinese president Xi Jinping met with the Gulf Cooperation Council (GCC) – a group made up of Bahrain, Kuwait, Oman, Qatar, Saudi Arabia and the United Arab Emirates – to discuss trade and investment. Also on the agenda were talks on forging closer political ties and a deeper security relationship.

This summit in Saudi Arabia was the latest step in what our research shows is an increasingly close relationship between China and the Gulf states. Economic ties have been growing consistently for several decades (largely at the expense of trade with the US and the EU) and are specifically suited to their respective needs.

China’s pronounced growth in recent decades has been especially significant for the oil rich Gulf state economies. Between 1980 and 2019, their exports to China grew at an annual rate of 17.1%. In 2021, 40% of China’s crude oil imports came from the Gulf – more than any other country or regional group, with 17% from Saudi Arabia alone.

And the oil will likely continue to flow in China’s direction. In 2009, it was predicted that China would require 14 million barrels of oil per day by 2025. In fact, China reached that figure in 2019 and is expected to need at least 17 million barrels per day by 2040. At the same time, the US became a net oil exporter in 2019 and thus achieved a longstanding foreign policy goal: to overcome its dependence on Middle Eastern fossil fuels.

China has benefited from increasing demand for its manufactured products, with exports to the Gulf growing at an annual rate of 11.7% over the last decade. It overtook the US in 2008 and then the EU in 2020 to become the Gulf’s most important source of imports.

These are good customers for China to have. The Gulf economies are expected to grow by around 5.9% in 2022 (compared with a lacklustre 2.5% predicted growth in the US and EU) and offer attractive opportunities for China’s export-orientated economy. It is likely that the fast-tracking of a free trade agreement was high on the summit’s agenda in early December.

The Gulf’s increased reliance on trade with China has been accompanied by a reduction in its appetite to follow the west’s political and cultural lead.

As a group, it was supportive of the west’s military action in Iraq for example, and the broader fight against Islamic State. But more recently, the Gulf notably refused to support the west in condemning Russia’s invasion of Ukraine. It also threatened Netflix with legal action for “promoting homosexuality”, while Qatar has been actively banning rainbow flags supporting sexual diversity at the Fifa men’s World Cup.

So Xi’s visit to Saudi Arabia was well timed to illustrate a strengthening of this important partnership. And to the extent that anything can be forecast, a deepening of the Gulf-China trade relationship seems likely. On the political front, however, developments are less easy to predict.

China is seeking to safeguard its interests in the Middle East in light of the Belt and Road initiative, its ambitious transcontinental infrastructure and investment project.

But how much further might the Gulf states be prepared to sacrifice their longstanding security pacts with western powers (forged in the aftermath of the second world war) in order to seek new ones with the likes of Beijing? Currently, America has military bases (or stations) in all six Gulf countries, but it is well documented that the GCC is seeking ways to diversify its self-perceived over-reliance on the US as its primary guarantor of security (a sentiment within the bloc that was pronounced while Obama was president, less so with Trump, but on the rise again with Biden).

In the coming period, the GCC will need to decide which socioeconomic path to pursue in the post-oil era where AI-augmented, knowledge-based economies will set the pace. In choosing strategic ties beyond trade alone, the Gulf states must ask whether the creativity and innovative potential of their populations will be best served by allegiances to governments which are authoritarian, or accountable.

Emilie Rutledge does not work for, consult, own shares in or receive funding from any company or organisation that would benefit from this article, and has disclosed no relevant affiliations beyond their academic appointment.