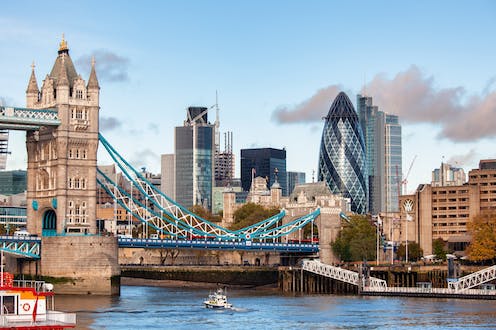 The UK government wants to rewrite the rules designed to keep the country’s banks and financial institutions stable – again. The so-called Edinburgh reforms announced recently by UK chancellor Jeremy Hunt will “unlock investment and turbocharge growth in towns and cities across the UK”, he says.

The government is certainly heading in the right direction in some areas, including new measures on sustainable finance. Hunt has promised a 2023 update to its original green finance strategy, published in 2019. This includes regulating the environmental social and governance (ESG) ratings providers from which financial firms get data for green investment and lending decisions.

It will be a challenge to standardise this sector since there were more than 600 ESG ratings and rankings in 2018 and the industry has only continued to grow since. But government plans to work with regulators to safeguard transparency and good market conduct in this area could help the City of London to become a global centre for sustainable finance.

On the other hand, some of the regulations that Hunt wants to reverse were only recently introduced in response to the 2008 global financial crisis. Relaxing them could jeopardise the UK’s financial stability. What has changed in less than 15 years to warrant a relaxation of these rules? The short answer is nothing. In fact, history seems to be repeating itself.

The Great Depression of the 1930s – the longest and deepest global economic crisis of the 20th century – was triggered by a catastrophic failure of financial markets and banks. Banking legislation introduced afterwards aimed to separate investment banking from commercial banking to protect customer deposits and ensure financial stability.

This was all forgotten during the wave of banking deregulation in the 1980s and 1990s. Reversing these post-depression separation rules basically prepared the ground for the 2008 global financial crisis. After that downturn, ring-fencing was reintroduced in both the UK and the US (via the Volcker rule).

This is why it was surprising when UK chancellor, Jeremy Hunt, announced the Edinburgh reforms in December 2022. These changes will relax three important protections that were created after the global financial crisis to address some very specific contributing factors to that crash.

1. The ring-fencing of bank capital

When retail banks ring-fence a certain amount of capital it protects them from shocks originating elsewhere in their business, such as a risky investment or overseas activities. From a bank’s point of view, it increases the level of shareholder capital it must hold rather than invest, which makes the bank less profitable. A recent independent UK review recommended tweaking ring-fencing regulation slightly to change its scope to focus on large, complex banks. However, it reinforces its fundamental role in protecting the money people deposit with banks in basic savings and current accounts.

Increasing the level of shareholder capital banks must hold was a major post-GFC regulatory change because the levels had not properly cushioned banks’ losses during the crisis. This is partly why billions of pounds of taxpayers’ money was spent bailing out failed banks in the UK after the 2008 crash.

Excessive risk taking by some bank executives was another factor in the fall of the banking sector in 2008. Flawed compensation schemes that encouraged short-term thinking encouraged many managers to take high stakes bets with no liability. After the crisis regulators introduced measures to discourage such excessive risk taking. This included bonus caps – since removed by the previous chancellor – and clawbacks of previous bonuses for any serious wrongdoing in the run-up to the financial crisis.

The current chancellor is taking this a step further with a review of a key regulation introduced to increase senior bank managers’ accountability. UK regulators recently reported that this rule – the senior managers and certification regime – is curbing risk appetite quite effectively, with 94% of managers seeing a positive impact on behaviour and culture in banks as a result.

Restrictions on the sale of a group of loans or mortgages as a bundled financial product – or securitisation – will also be reconsidered under Hunt’s plan. A government review last year recommended relaxing such criteria, but there is also abundant evidence that securitisation destabilised banks during the 2008 crisis.

The use of these products contributed to deteriorating lending standards at many banks because the bundled nature of these products essentially made them opaque. Once a financial innovation that was heavily praised by leading policy makers, securitisation was actually a major cause of the global financial crisis.

Regulators have voiced concerns about damage to financial stability due to any relaxation of rules – both current and former Bank of England staff. Senior European Central Bank figures have also criticised similar efforts to dilute EU banking regulations.

Perhaps unsurprisingly, some city figures are largely in favour of these changes. City minister Andrew Griffith has said he is “assured” that banks are safe, for example.

But no one predicted the 2008 global financial crisis either. Also, banking sector risk can accumulate over time. Relaxing the rules is unlikely to lead to an immediate crash, but risk could build up in the financial system over the next 5 to 10 years following any changes.

The global financial crisis has cost Britain up to £7.4 trillion in lost output alone. It has also had significant negative long-term effects on global economic growth and income inequality, among many other issues.

Boosting economic growth by making the City internationally competitive may be successful in the short term. But rolling back these key regulatory measures all at once could jeopardise the UK’s long-term financial stability.

Alper Kara does not work for, consult, own shares in or receive funding from any company or organisation that would benefit from this article, and has disclosed no relevant affiliations beyond their academic appointment.

2022-12-24
Previous Post: From Queen Elizabeth to Sanna Marin, young women in politics have always faced prejudice
Next Post: Foster children can easily lose their first language – but giving it a place in daily life can make a big difference